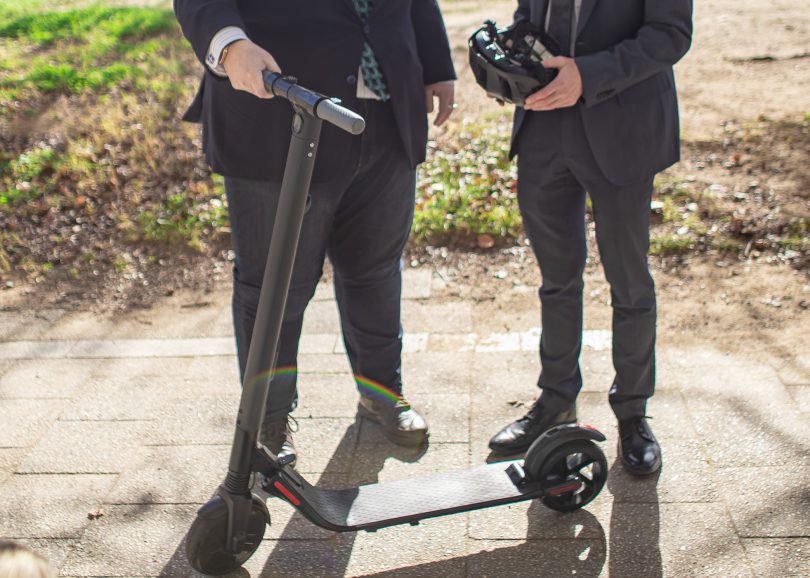 Where should e-scooters be allowed to be ridden? The ACT Government wants you to have your say. Photos: George Tsotsos.

Electric scooters are gaining speed in the nation’s capital, as the ACT Government considers changing road rules to accommodate the new mode of transport on Canberra’s roads and footpaths.

It is currently illegal to ride electric scooters on roads and footpaths in the ACT, with infringement notices up to $151 being issued.

ACT Road Safety Minister Shane Rattenbury said he wants to get on the “front foot” with the new devices and has launched a discussion paper seeking the community’s opinion on whether the vehicles should be allowed to travel on the road, footpaths and other high pedestrian areas.

The ACT Government is also deciding what the speed limit should be for e-scooters and whether there should be an age limitation on who may drive them. Mr Rattenbury said he wants to facilitate the safe use of e-scooters and similar devices in the ACT without compromising road safety.

“E-scooter use has increased globally, particularly via rideshare operators, and we have seen trials of these devices pop up throughout Australia,” Mr Rattenbury said.

“E-scooters and similar devices are currently not permitted to be used in public areas in the ACT – however people are keen to use these new types of personal transportation devices.

“We need to make sure our regulations keep pace with these new technologies. 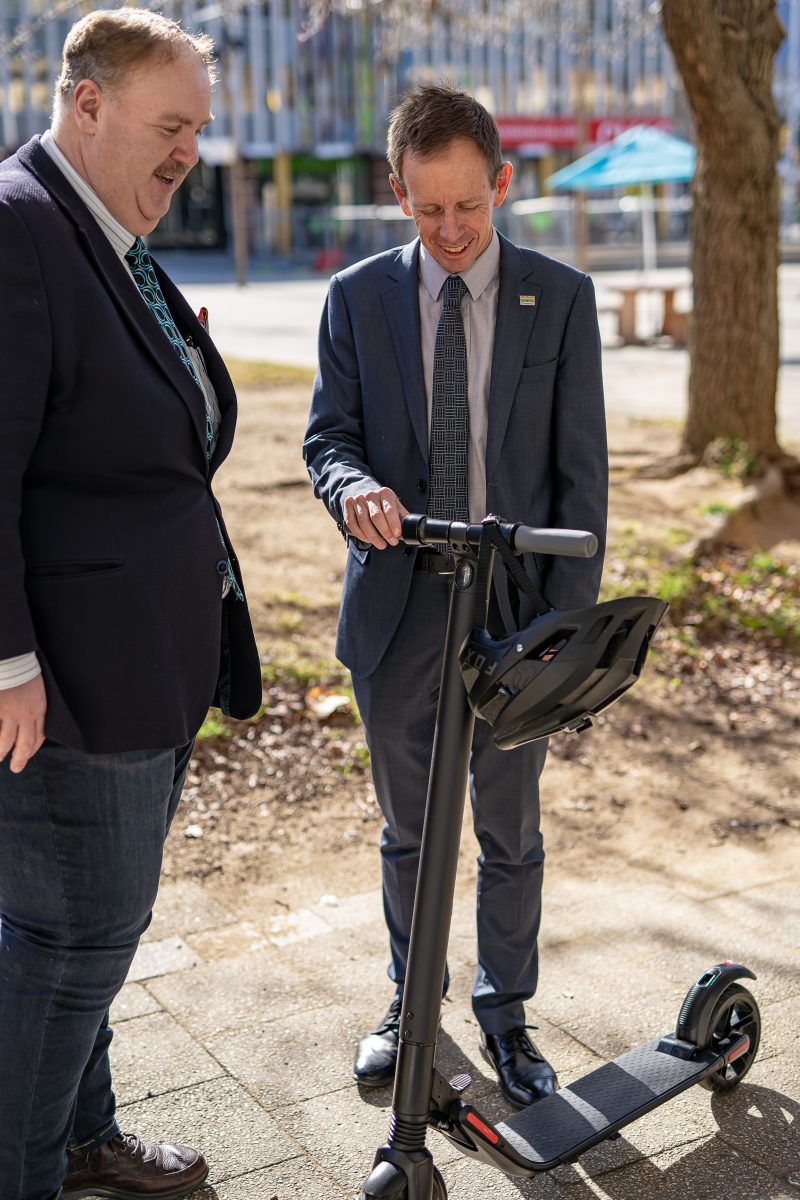 “It is important that e-scooters and similar devices are appropriately regulated to ensure they are used safely and that we minimise the potential for injuries or other conflicts.”

Other states and countries have a range of different laws regarding the use of e-scooters, with Queensland the only Australian jurisdiction to regulate the use of personal transportation devices on footpaths and shared pathways.

In Queensland, e-scooters and similar devices are allowed to travel on footpaths, shared paths, bicycle paths, bicycle side of separated paths, and on roads with speed limits of 50km/h or less.

Mr Rattenbury said the ACT Government will put a rigorous regime in place to make sure all members of the public are safe and to mitigate any safety concerns.

“Helmets will be required, you are not allowed to use your mobile while riding and you can’t be impacted by drugs and alcohol while riding an e-scooter,” he said. 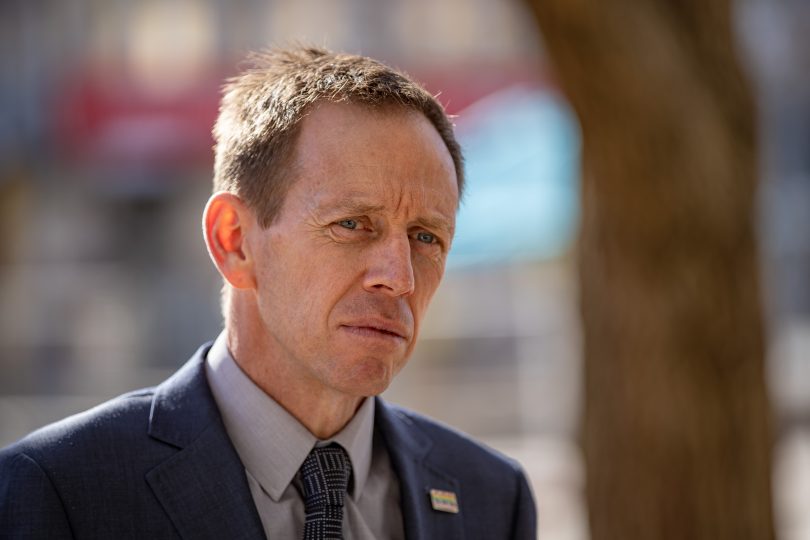 The ACT Government has been approached by three or four different scooter-share companies who are “very keen” to operate in the ACT, which Mr Rattenbury said the government was very open to.

Mr Rattenbury said a separate exercise will be undertaken to develop a legislative framework for commercial operators of dockless share schemes for e-scooters and bikes to build on the ACT’s successful bike share trial.

The consultation will run for four weeks, click here to have your say.

Georgina Campbell your next ride to uni 😁

Yep we definitely should let them on the roads, bicycles can stay 1metre away and cars 2 metres..... what could go wrong ???

Great initiatives here by Dallas city authorities all of which should be adopted by our mob:

Sure, let 'em on the footpaths along with the bikes. Then, create a footpath infrastructure *just for pedestrians* so we we don't get barrelled over by all the other wheeled pests.

Will they pay registration if using the road ?

Roberta Bausch pretty sure taxes buy roads ey not registration. What would registration even achieve?

Phillip Scharf whatever go argue with someone else. Everyone entitled to their own opinion

Shouldn't be on the roads as it is unsafe for the rider.

Footpath should be allowed with a speed limit.

NOT on the footpaths. Our paths are treacherous enough as it is. If they can use them safely on the roads, go for it.

In the first image, is Damien Haas saying to Rattenbury: “You have got to be joking, Shane”

Have your say instead of grumbling to me Richard 🤣🤣

Footpath or bike lane BUT not on the road and helmet ⛑complusery.

Malcolm Campbell Footpaths? Have you seen how fast they are? I think they are a good innovation in some ways but not of ‘foot’ paths.

Julie Delves so if not on the footpath and sure as in hell not on the road up against cars trucks and buses then where. I will confess I use to let my primary school son ride his electric scooter on foot path. What do you think is the answer???

Malcolm Campbell Get rid of this Government is the answer

What’s stopping one from doing it now

In Brisbane what used to be a leisurely stroll along the Kangaroo Point Cliffs path has become a nightmare. People on these scooters fly past with no warning. Saw one kid get taken out when he dared to get away from his mum and saw another thirty something woman screaming in pain after she came a cropper. And we were only staying in Brisbane for three days!

They are way better and faster than bicycles. Why not?

Because they don’t need a human push and also will not stuck in front of a car like cyclists do on a slopey road.

I think supporting any alternatives to cars is a positive step.

They already are, passed on on Barry Drive riding in the on road bike lane yesterday.

put em in the bike lanes and they gotta wear a helmet and pay rego since its powered.

Jason Preston You don't have to pay rego on an e-bike so why on an e-scooter?

Susan Moore - 29 minutes ago
This is a good news a story 😊 View
Nola Scheele - 7 hours ago
I think there were too many onlookers and he was scared, that might have been why he was jumping back in. Well done to the re... View
Josie Conlan - 9 hours ago
What a beautiful act of care an kindness... View
Community 9

Jim Cox - 10 hours ago
Businesses should be able provide a safe environment for both their staff and patrons. Bring it on. View
whatwik - 11 hours ago
Confidently guessing the overwhelming majority of us will read that as human rights for those who are vaccinated/ doing the r... View
News 33

thatsnotmyname - 11 hours ago
With the growing population bigger is better. Shame this will need to be scaled back! build it I say. View
News 29

David Anderson - 11 hours ago
No respect for your elders you young punks..🤠 View
show more show less
*Results are based on activity within last 7 days

It looks like next year's federal election will be even more about keeping Australia safe. The Morrison Government will seek...
News 51