Helping Canberra charities par for the course for Effective People 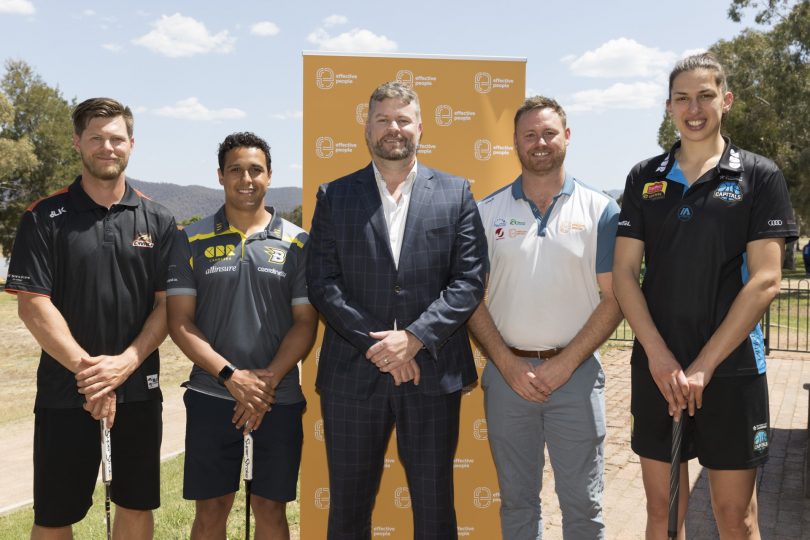 Leading Canberra-based recruiting agency Effective People has again demonstrated its commitment to the community through the organisation of a corporate golf day on Friday, 15 November at the Murrumbidgee Country Club.

The golf day, featuring the UC Capitals, the Canberra Brave and the Canberra Cavalry, will see money raised going to three charities – Lifeline Canberra, Menslink and Rise Above. Each corporate golf team will have a representative from one of the three sporting teams as part of their playing group. It will be a cross-pollination of corporates, as well as showcasing the sports and the charities.

It highlights a series of partnerships with Effective People, also a sponsor as recruitment partner of the three teams.

Getting together for a great cause: Effective People charity golf day

In the lead up to Effective People's first charity golf day on 15 November, Tim Gavel reports from Murrumbidgee Country Club to find out more about how the event will support Menslink, Lifeline Canberra and Rise Above. It's almost booked out, so be quick if you'd like to participate.

For Effective People CEO Dean Hill, himself a low handicap golfer and president of the Murrumbidgee Country Club, it is the perfect fit.

“Obviously we are a very community-based organisation, and we are keen to help local sports and charity groups, which aligns with our business. And that alignment is helping people find their careers,” said Dean, “It also aligns with our community values.”

His organisation is passionate about sport and the role it plays in the community. Funds raised will be equally shared across the three charities.

“So often, mental health is not a conversation that organisations are comfortable having, but companies such as Effective People are helping normalise the conversation,” she said, “And there is the fund-raising aspect as well.”

UC Capitals co-captain Marianna Tolo says her team is very community-focused and is proud to see sports working together for charity.

“What we want to achieve is a better community. We can achieve it in a number of ways and this is a great way to do it. It shows how we are willing to work together for the community.”

Dean Hill expects that about 170 golfers will tee-off on Friday, 15 November at the Murrumbidgee Country Club, bringing the sporting teams and corporates together to raise money for three vital charities.

It demonstrates what is possible through the collaborative approach adopted by Effective People.

What a great initiative 👍

@the_riotact @The_RiotACT
CEO of @RaidersCanberra, Don Furner, will embark on a 145km walk of the Canberra Centenary Trail in early November to raise money for @Menslink, and he'll likely be joined by club coach Ricky Stuart https://t.co/MR8N6Sq2Nj (34 minutes ago)