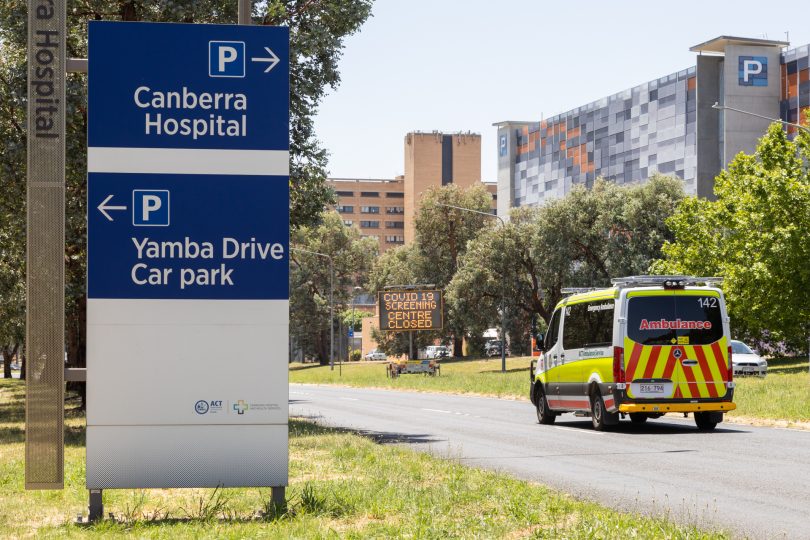 ED waiting times improved slightly in the March quarter, but a worse report card looms in the next period. Photo: Michelle Kroll.

The ACT’s public hospitals are chipping away at emergency department waiting times and the elective surgery list, but the government admits it still has a lot more work to do.

The latest Quarterly Performance Report for January to March shows slight improvements in ED waits, helped by fewer people turning up to the hospital than the previous period, and more elective surgeries performed and fewer patients on the waiting list than in Quarter 2.

The median waiting time in triage category 1 and 2 was zero and six minutes respectively, unchanged from the previous quarter, but the figures for category 3 (urgent) and 4 (semi-urgent) improved slightly by 1.7 per cent and 4.2 per cent.

She said both Calvary and Canberra hospitals were working to improve patient flow through direct admissions into wards, rapid assessment by senior clinicians, and increased sharing of information between jurisdictions.

But Ms Stephen-Smith warned that the next quarter’s report card would be affected by periods of significant demand.

“This increase in demand is being experienced across the country, with most jurisdictions reporting pressure on emergency department and elective surgery performance,” she said.

“On a national level, work is underway to better understand what is causing these spikes in demand.”

Ms Stephen-Smith said the government’s $30 million boost to elective surgeries, outpatient appointments and medical procedures impacted by COVID-19 in 2020 was bearing fruit, as well as partnerships with private hospitals.

There were 3,729 elective surgeries performed between January and March this year, an increase of 3.6 per cent from the previous quarter.

Ms Stephen-Smith said overdue patients were a priority, and the 978 patients waiting for elective surgery represented a 10 per cent fall compared to the previous quarter.

“From the start of 2020-21, the total number of overdue patients has decreased by approximately 25 per cent,” she said.

Ms Stephen-Smith said the ACT was on track to deliver a record number of elective surgeries in 2020-21, and it was expected that about 15,300 will be performed in the year compared to the previous record of 14,015.

But the number of patients removed from the elective surgery waiting list for reasons other than surgery was up nearly 40 per cent, from 566 to 788, and fewer surgeries were performed within clinically recommended timeframes, down 0.7 per cent, 8.1 per cent and 2.7 per cent respectively across Urgent, Semi-urgent and Non-urgent categories.

“This combined with a median wait time of 14 minutes shows that Canberrans continue to be provided with efficient, accessible and timely care through our Walk-in Centres,” she said.

Thank goodness Minister Stephen-Smith is on the job. We have the government we deserve.