Roughly this time last year I was sitting on a couch in The Phoenix and Joel Barcham said “Dude you’ve GOT to check this out” and showed me a video on his phone of himself and Pablo Latona running a giant slinky down the escalator in the middle of King O’Malleys.

I was impressed and said “Dude you’ve GOT to put that on YouTube, it’ll totally be a hit and I’ll do a story about it on RiotACT!.

He did put it on YouTube, I did run a story on it and it has duly become a YouTube sensation with around 800,000 views at the time of writing.

(For those wondering about the economics of YouTube 800,000 views has netted the team $400 out of Google)

What no one expected was a Japanese game show “Unbelievable” getting in touch with Joel to use the video on Japanese TV.

And the bugger wouldn’t even buy me a pint last night. 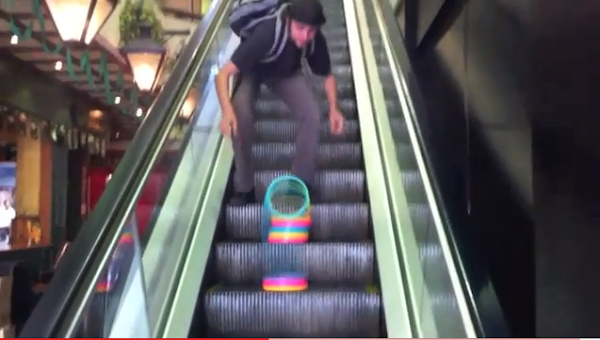 And if anyone is wondering how much rating the show Unbelievable is…
1) It is Fuji TV – the same station that brought you Iron Chef.
2) It is hosted by a very famous comedian/actor/director Takeshi Kitano – household name in Japan.
3) It is in a ‘golden’ time slot – 8pm on Thursday.

Think of the top most rating for a TV show you’d get in Australia, then multiple the viewers by about five.

That’s the greatest thing ever.

I can’t believe how excited I am. They should be made Kings of the Universe.

Really. That’s so amazing. I think they should have got 4 brazillion dollars.

And you’re a douche.

Doesn’t change the fact that the video was a lot less interesting that I was expecting it to be.

Good, but not as good as the amazon box IMO.

His awesome idea netted your business $400? You should buy him a pint!