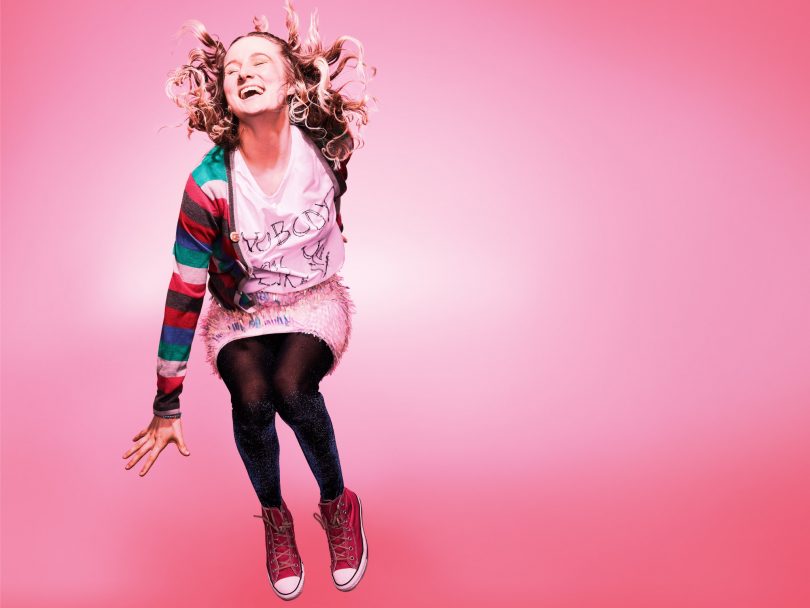 Get ready for the best pop concert you’ve never been to.

FANGIRLS follows the uproarious story of Edna, a plucky misfit scholarship girl who believes that she alone can win the heart of the world’s biggest pop star; Harry. Sure, he has 38 million other fans, but for Edna, that’s merely a hurdle. Because there’s nothing she won’t do to meet Harry.

With a dazzling cast (including Aydan from The Voice), inexhaustibly witty dialogue, and heart-pumping, infectious songs, it’s an ode to love that smashes all generational generalisations. Whether or not you’ve ever been a fangirl/boy it will move you and leave you with an involuntary ear-to-ear grin.

Sydney-born FANGIRLS creator Yve Blake is fascinated by the way that society can see a mob of screaming fans as “embarrassing”, if they’re female, and at a pop concert, but “passionate”, if they’re male, and at a footy match. She set out to write the show she wished her 14-year-old self could have seen: a comedy all about the ways that the world tries to convince young women that they’re not as worthy as their brothers.

After an international bidding war amongst major US and UK producers, this gem of a show was poised to take the theatres of the world by storm when suddenly they went dark. Catch this show now and say you were there at the start to experience the wild energy bursting out of this intimate show. Hurry, as this will go off!

Whether you screamed for The Beatles, One Direction, or your footy team in the Grand Final, you will find something to connect with in FANGIRLS.

Stephen Harris - 18 minutes ago
Julian Hayes thenif it increases their costs but not their profits then they will stop doing what they are doing and do it di... View
Nicky Goose - 14 hours ago
Flexible work hours are a fabulous idea and frankly in a modern society and economy why we don’t push them more is beyond m... View
Michael Roy - 14 hours ago
Robert Knight that is one of the reasons it is abysmal, we need dedicated BRT lanes View
Food & Wine 3

Alex Petrow - 3 hours ago
Easy Purgy!! Double the speed limit. Because you will be on the road for half the time, the window for prangs is also halved!... View
Roderick Saunders - 3 hours ago
Kirsty Noad Canberra's had the log book assessment system for years. I think you only needed 20 hrs with an accredited drivin... View
Jason Thornthwaite - 3 hours ago
Good driving= no parking fines, no speeding fines, no accidents...pretty simple, but a positive amongst all these negative co... View
Community 2

Jade Barges - 3 hours ago
Such a pretty Church 💗 View
Janet Ilchef - 16 hours ago
I remember seeing Canon Buckle swinging beams into place. And the bells at St John’s in Reid were given by Lord de L’Isle... View
Motoring 32

Martyn Tweedie - 13 hours ago
So you're an exception. Nice to be able to afford all that. Sounds like the problem is affordable housing and rent, not the w... View
Patrick J Pentony - 14 hours ago
They will have a great view of those new massive powerlines View
Marko Lehikoinen - 14 hours ago
Martyn Tweedie we have 3 cars now, needing a 4th and in few years will need a 5th one. When kids can't afford to move out and... View
News 13