Everyone in rugby is mourning Vickerman: ex-Brumbies CEO 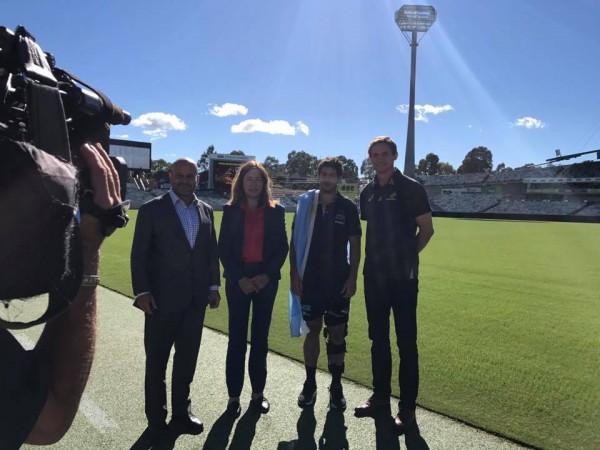 Now chief operating officer of the Australian Rugby Union, Mr Clarke was in Canberra this morning to join ACT Sports Minister Yvette Berry, Brumbies halfback Tomas Cubelli and coach Stephen Larkham for an official announcement that the Wallabies will play Argentina’s Pumas in a rugby international here at GIO Stadium on September 16.

The former advertising executive described Vickerman’s death as a tragedy, and acknowledged the difficulties many sportspeople face upon retiring from their careers.

“I think it’s something that we as administrators need to continue be ever-vigilant with,” Mr Clarke said.

“The transition from being a professional sportsman into the world after sport can be challenging, and we’ve seen it in a number of sports, and we are looking at how we can invest expertise and resources to help try and smooth that transition for all of our players, and I know a lot of other sports are too.”

He remembered Vickerman from his Brumbies days with fondness.

“He was a gentle giant, a wonderful player, as you saw Phil Waugh’s comments today, about when you had Dan in a jersey running out beside you, you felt an extra level of confidence, and that was the sort of guy he was,” Mr Clarke said.

“To have something like this happen, at his age of 37, with a young family, is just simply beyond belief, and everybody in rugby is mourning.”

Mr Clarke said both the ARU and the Rugby Union Players’ Association were working to support to members of the rugby community as they grieve for the former star. An offer for counselling had been put out to all players, particularly those who’d played with Vickerman at the Brumbies, Waratahs and Wallabies.

chewy14 - 7 hours ago
Capital Retro, Firstly, most of the interest rate cuts happened well before the current crisis, so you can't just claim your... View
Brenton Higgins - 8 hours ago
Joshua we’ve had two elections on that already. Canberra decided. View
Jayne Denise - 8 hours ago
Sean Bishop I am a reformed anti-tramer. Northborne is so good now with less cars and less buses. 👌Coincidentally, I work... View
Opinion 7

@The_RiotACT @The_RiotACT
High-country hero David “Spike” Milliken has been recognised for decades of service in the final of the 2020 Rotary NSW Emergency Services Community Awards https://t.co/Y3fQFYqnTu (1 hour ago)