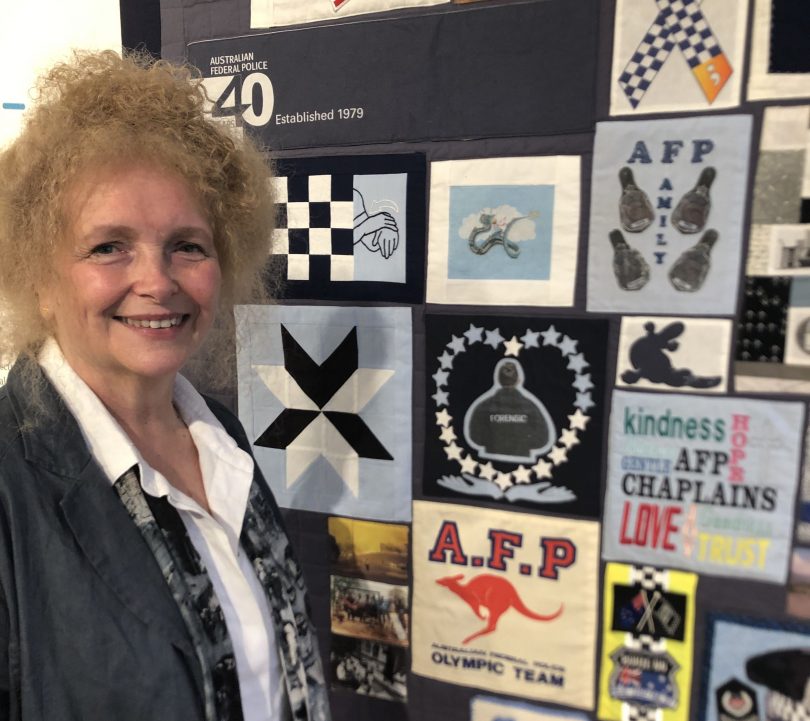 Chris Cranston, the curator of the Australian Federal Police exhibition, Threads of Policing, in front of an AFP quilt. Photo: Sally Hopman.

A mannequin wearing a wetsuit is displayed back to front. Where the diver’s bottom would be, you can see rips, scraps of the synthetic rubber material that have come away from the suit.

No, it’s not shoddy workmanship, or a mistake. Rather it tells the most evocative of stories that few of us will ever forget.

It was June-July 2018 and we were all glued to TV screens watching a remarkable team of divers from the Australian Federal Police (AFP) Specialist Response Group help save the lives of 13 young soccer players trapped inside a Thai cave by rising floodwaters.

AFP divers became part of the international collaborative rescue effort, installing air tanks, pumps and other supplies along the proposed escape route. For their efforts, the divers were awarded Order of Australia and bravery medals.

The ripped wetsuits greet visitors to a remarkable exhibition, Threads of Policing, now on at Canberra Museum and Gallery. They were worn by the AFP divers who risked their lives to save the young Thai soccer players and likely got torn on rocks as the divers were forced up against the walls of the narrow caves.

The exhibition tells hundreds of stories such as this, some more well known than others.

For curator Chris Cranston, the aim of the 25,000 item exhibition is to tell just the one story: that of the AFP.

She says it is important to honour AFP members for the work they do, much of it far from the public eye. 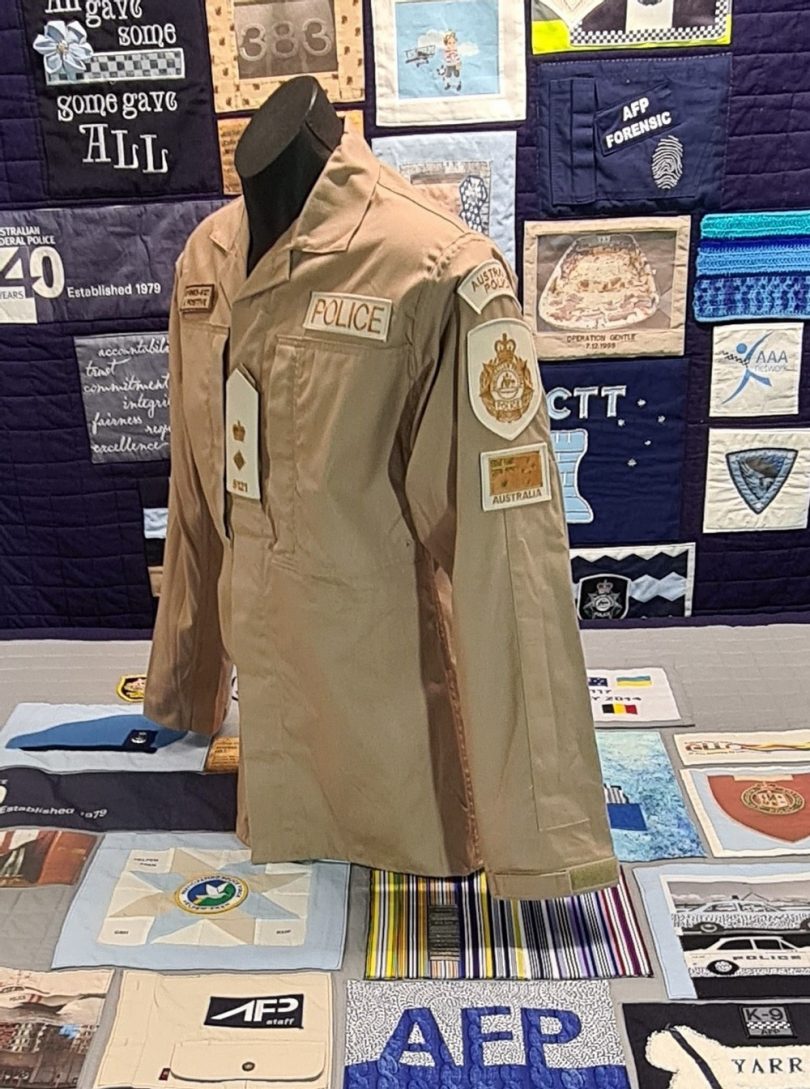 A shirt worn by an Australian Federal Police officer on deployment to Afghanistan in 2011. Photo: Canberra Museum and Gallery.

The idea for an exhibition started in 2019 when the AFP celebrated its 40th anniversary. A colleague jokingly asked Chris, who they knew was a keen quilter, if she was going to make one for the anniversary.

“Traditionally, police quilts just have badges on them,” says Chris. “They are much loved, but I thought for the 40th anniversary we should do something different.

“So I sent an all-staff email asking members if they’d do a block for a quilt and a statement to go with it saying, ‘What the AFP means to you.’

“I ended up getting 120 blocks, enough to make four quilts.”

All four quilts are on display in the exhibition. They feature messages, photographs and memories from all branches of the AFP family, human and canine.

“They tell the most moving of stories – what makes AFP members and their families tick,” says Chris.

There’s a memorial to murdered Assistant Police Commissioner Colin Stanley Winchester, dated 10 January, 1989, along with embroidered messages: “And maybe remind the few, if ill of us they speak, that we’re all that stands, between the monsters and the meek.” 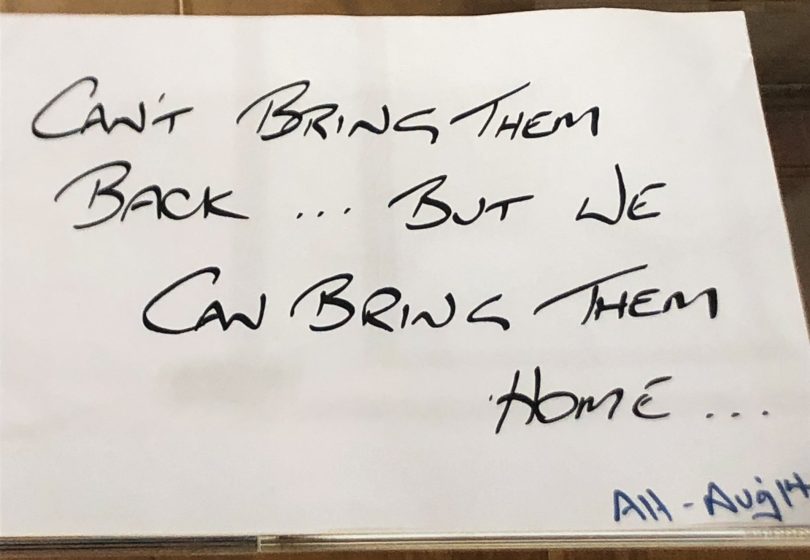 The note on the door of the Australian Federal Police’s operations room during the search for missing plane MH17. Photo: Sally Hopman.

Police dogs feature prominently in both the quilts and the exhibition, particularly one dog called Yarra whose reward for finding stuff other people tried to hide was a white towel styled in the shape of a bone, which features on the patchwork.

Once Chris finished the quilts, she decided to use other items from the AFP collection to complete the story.

Since the AFP Museum closed in 2003, for security reasons, Chris has been keen to explore new ways to show off the collection to the public.

“I want to get the AFP message out there,” she says. “Show what the members do, honour their work.

“We are dedicated to preserving significant moments in AFP history and ensuring future generations know of the incredible work and achievements of AFP members throughout our 40-year history.”

Items on show are as diverse as the AFP membership itself, in Canberra, nationally and internationally. They include a very young, but clearly loved Constable Kenny; the shirt worn by an AFP peacekeeper in Afghanistan; and a sign on the wall in the AFP operations room at Police Forward Command during the hunt for the missing Malaysian Airlines flight MH17 – “Can’t bring them back … but we can bring them home”.

There’s also an ID card for Kaiser, the ACT’s first police dog. He was so special he got his own warrant card in 1983, and an emergency ration pack containing treats such as barbecue beef, baked beans and tuna, not necessarily designed to eat in that order.

Threads of Policing is on at Canberra Museum and Gallery until 5 March, 2022. It is open daily from 10 am. Admission is free.

Kris Peralta - 15 minutes ago
Jackie White I agree, but I do believe a motorsport facility would reduce antisocial behaviour in general, not just over the... View
Mathew Mendo - 17 minutes ago
Live and let live, helps the economy more than the flower show. View
Jackie White - 17 minutes ago
Brendan Twomey you are totally missing the point: hoons repeatedly say they would confine their 'hooning' to a designated are... View
Lifestyle 30

Sandra Carle - 16 minutes ago
Tasmynee Carle must get one of these... View
News 240

Jazzy Dhooria - 17 minutes ago
It's not a fair assessment so long as it doesn't happen to you. View
Laura Bee - 20 minutes ago
I can't believe people seriously blame the gum trees. Gum trees in their natural environment develop symbiotic relationships... View
Frank Calipari - 24 minutes ago
James Forge I’m talking about tree pruning & trees that fall during wind, rain & storms not the falling of leaves. Though t... View
Lifestyle 6

Futureproof - 3 hours ago
I am in isolation for the second time in two months. Like the last time, I am not feeling the best. No RATs available, PCR dr... View
Sam Oak - 6 hours ago
At this point any advice about taking precautions and locking yourself up especially if you've already contracted and recover... View
Food & Wine 16

Barbara Biddle - 8 hours ago
Peter Montgomery yep so when the track is closed down the developers get a hold of it. All profit based … View
show more show less
*Results are based on activity within last 7 days

Pierogi lovers of Canberra, I am the bearer of bad news. After six-and-a-bit glorious years of plump, tasty dumplings, Polo...
News 240

With over 6000 current cases of COVID-19 active in the Canberra community and even more in the surrounding region of...

I know it’s a generalisation, but many Canberra residents appear to have an uncomfortable relationship with anything to do with...
News 240

@the_riotact @The_RiotACT
#Publicservice bosses have been told to be flexible about working arrangements in the face of the #Omicron wave https://t.co/kLgp6igvuQ (3 hours ago)