Exit through the gift shop – A short season at the NGA 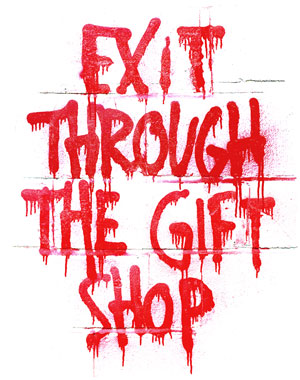 If you are looking for something indoorsy to do in Canberra this long weekend then I would definitely recommend you see the first film of the elusive street artist, Banksy at the National Gallery of Australia.

Not only well it give you 90 minutes of genuine, laugh out loud entertainment but it will bug you for the rest of the week while you puzzle over whether the film is a genuine documentary or a very well crafted hoax. Is truth stranger than fiction?

The film is essentially in two parts, the first tells the story of Thierry Guetta a Frenchman living in California, a compulsive filmmaker who develops an obsession with street art and sets out to make a documentary of renowned artists Shephard Fairey and Space Invader and others. We follow his journey in the back streets of Paris, London and LA where he tags along in the dark of night with the artists as they scale buildings, paste up their stencils and get chased by the police. It becomes his goal to make contact with Banksy and when they do, Banksy takes a liking to the odd but helpful Frenchman, ‘his facial hair is like someone from the 1860’s’. The second part flips the camera around to tell the story of Thierry from the point of view of Banksy and other street artists as the rather average quality of Thierry’s documentary emerges and they realise that the one person who has unprecedented access to their art-making and their philosophy is not quite up to the task of recording it.

For what is a relatively short film, it is though provoking. It explores the hype and commercialism of street art, the nature of obsession, gullibility and group-think and also the big question: what makes good art?

It is also a bit of an emotional rollercoaster, poignant and sad at times as we the film reveals the extent of Thierry’s film-making obsession and the long suffering wife and children. And speaking of rollercoasters, check out Banksy and Guetta’s crazy adventure in Disneyland. But sympathy turns to disbelief as Thierry reinvents himself as the street artist, Mister Brainwash and stages the show to end all shows, exploiting even his friends to achieve success.

What we learn is that scanning an image on a computer, applying a little bit of photoshop, blowing it up to over-life size and sticking it on the side of a building or spattering it with fluro coloured paint seems to be the key to making great art and loads of cash. But is Banksy or his fellow artists doing anything different?

The film also gives a tantalising taste of the world of Banksy, his studio and methods. His face is always in shadow but he comes across as deadpan funny and a regular nice guy.

Whether Banksy (is it really him anyway) is taking us for a ride or not with this film, it is worth going along with. It will be fascinating to see where the story ends and whose art survives the hype.

(More details at the NGA site or moshtix.

I went along to this on the weekend. Only found out by word of mouth.

It was fantastic. A really good film.

I’m a fan of Banksy and Shepard Fairey and the whole movement but I didn’t know what to think of all of it by the end. Which just made it seem all the more clever to me.

There are a lot of people now imitating the work of Banksy and Fairey I think and it devalues the style as a whole but these guys still strike me as very talented and original.

But that Mister Brain Wash, man! Where does he fit in? Some kind of pop-art street hybrid that has completely cashed in on the movement? He was there at the start, albeit by accident, then completely ripped of the style of those he helped and made millions.

Good art to me is supposed to be thought provoking and this certainly was.

Thanks for the write up. Unfortunately I can’t make tomorrows sessions; Wish this was advertised better.

Mick Fraser Jnr - 36 minutes ago
Grace Hayes agreed a joke they dont give a 💩 View
whatwik - 6 hours ago
Here's road map clarity for us - "...and as we get closer, we will know when that time is and what that'll be for certain eve... View
Grace Hayes - 7 hours ago
Yeh and some small/medium business DONT qualify for grants... I’d like to see how many of these business that won’t be op... View
Business 26

Jackie Fuller - 1 hour ago
Brydie Kelly if that's your thing that's good 👍 View
Brydie Kelly - 6 hours ago
Jackie Fuller I've been to many a birthday party and had my 30th there. It was always a warm and welcoming environment. View
Alicia Conley - 8 hours ago
If they try put a maccas or KFC there I'll be protesting View
Lifestyle 1

Tom Worthington - 2 hours ago
ANU, University of Canberra, and other Australian unis, now offer a large number of undergraduate and postgraduate certificat... View
Tom Worthington - 4 hours ago
Vocational institutions also provide a way to get a qualification with a minimum of study. The staff at CIT helped me documen... View
News 27

Nathan Worrell - 4 hours ago
I'm not surprised, Griffith and Narrabundah have house construction work going on all over the place and every time I take my... View
Gassed - 5 hours ago
This is the result of the cowboy section of the construction industry opening up. View
Opinion 35

Kathleen Beck - 7 hours ago
Jesus also says in Matthew do not add or take from the law until certain things are accomplished, Paul's covenant is adding.... View
News 2

jwinston - 7 hours ago
“ACTCOSS CEO Emma Campbell said human rights must remain at the forefront of any decision to use force.” It seems to me t... View
show more show less
*Results are based on activity within last 7 days

There have been plenty of promises and a lot of money thrown around, but electric vehicle (EV) charging stations in...
Opinion 58

@The_RiotACT @The_RiotACT
ACT Policing, NSW Police and the ADF will be undertaking joint border compliance activities over the school holidays. Yesterday, 4301 vehicles were stopped at major border crossings to the ACT https://t.co/yJEiPJLJfk (1 hour ago)