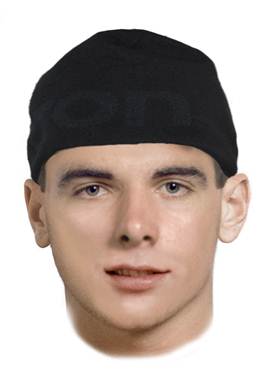 ACT Policing has released the facefit of one of two males who robbed a pizza delivery driver in Banks on Thursday (July 25).

About 9.25pm, a pizza delivery driver attended an address in Adcock Place, Banks, to deliver an order. At the address, the delivery driver noticed two males standing out the front of the residence.

As the delivery driver exited his vehicle and asked for payment for the order both males pulled kitchen knives and demanded cash and pizza. The victim complied with the demands for pizza before the two males fled through a laneway towards Paperbark Street, Banks.

Police conducted a door knock and patrol of the immediate area but could not locate the two males.

Both male offenders are described as Caucasian aged between 17 and 19 years of age. The male offender pictured was approximately 175-178cm (5’8”-5’10”) and was wearing a black woolen beanie, black top and off white-brownish track pants.

Anyone who saw anyone acting suspiciously in Adcock Place or Paperbark Street, Banks on the night of July 25 or may be able to assist with the investigation, is asked to contact Crime Stoppers on 1800 333 000, or via www.act.crimestoppers.com.au. Information can be provided anonymously.

@The_RiotACT @The_RiotACT
How do you rate @Channel7’s coverage of the Tokyo Olympics? Given the circumstances, Tim Gavel, who's commentated at seven Olympics, says it's been remarkable https://t.co/YMoHbEE7Md (20 minutes ago)