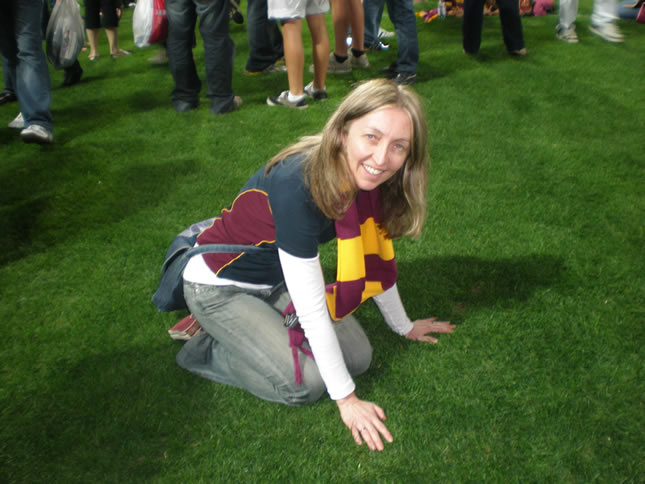 Former Greens member of the ACT Legislative Assembly Amanda Bresnan makes a mean Kofta if you ask really nicely and lists a teapot from Aleppo in Syria as one of her most valuable and treasured items.

Amanda is currently working as the Executive Director for Community Mental Health Australia and has no plans on stopping supporting our local and national community sector anytime soon.

A passionate and dedicated advocate for change, the former political whip is no stranger to controversy. Amanda will always speak out against injustice and consistently supports the most vulnerable people in Australia.

How long have you lived in Canberra? About 15 years

Most memorable event attended in the ACT? I went to a quarter final of the Asia Cup soccer Iran Vs Iraq and it was one of the most amazing sporting events I have ever been to! The atmosphere was incredible – non-stop drumming, singing, noise the whole time. And the game went through two periods of extra time and then goal shoot out. Incredible!

Things you love about Da Berra? I love that it’s a cosmopolitan city where I can see a great movie and have a meal from anywhere in the world, but that it only takes me 15 minutes to get anywhere and bushland surrounds us. Also that we accept and embrace people from around the world – so very important!

What you loath about the city? You know I really love Canberra – it’s a city that has been very good to me. I do sometimes find frustrating the things that will get people active over things that won’t, for example protesting over a 6 story building but not a young Aboriginal man dying in the AMC.

Most cherished memory in the capital? Meeting and marrying my hubby.

Which Canberra local do you most admire and why? Tu Pham, the previous ACT Auditor General. I met her many times when I was in the Assembly and was immediately amazed by this strong amazing woman and what she had overcome to get to where she had. She said something that has stuck with me in that women will always second guess or say no when they get asked to do something but a man will always say yes. So Tu Pham said say yes when you get asked as you are just as capable as anyone!

Most precious item you own? A small, some would say priceless teapot that I bought in the old market in Aleppo in Syria when I went there in 2008. Every time I see it my heart breaks for that amazing country!

First Canberra kiss and where? Hmm really. I used to volunteer at the RSPCA so will say a dog there that I walked that gave me sloppy lick on my face.

Most delicious Berra place you adore eating at? I love Kopi Tiam – a friend of mine runs it and the food is always delicious!

What do you want to be when you grow up? National Rugby League Commissioner or Brisbane Broncos CEO

What is a question you would like to ask everyone in Canberra? How in the hell did Donald Trump get elected??? I still can’t fathom it!

Anna Ji - 8 minutes ago
He deserves a pedestal for his sport. His views should not impact that, especially when it's just his perceived views by one... View
Vasa Krculj - 11 minutes ago
Novak, a great sportsman and a generous human being who donated $1 mil. to the NSW bushfire victims. He must be the first spo... View
Evan James - 8 hours ago
Well said, Tim!✔ View
Community 107

Steve Aust - 37 minutes ago
Colin Parton tell 1 story here View
Louise Flint - 1 hour ago
James Daniels I was sent there for advice before I took a redundancy package. They ignored my superannuation and taxation que... View
Patrick Barrett - 5 hours ago
Dylan your fault View
News 22

@the_riotact @The_RiotACT
You're #vaccinated and #boosted, you wear a mask, socially distance, wash your hands and sanitise, but as Zoya Patel discovered, you can do all the right things and still get #COVID https://t.co/LTSsyklfol (8 minutes ago)