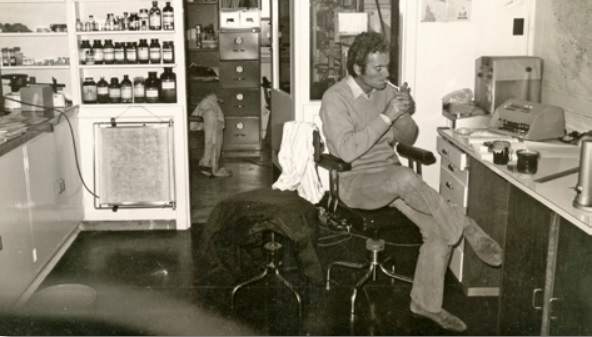 Spradbery after a night’s wasping in Hobart. Photo from his online resume.

An old school CSIRO scientist who was a passionate believer in scientific research for the public good has died.

Dr Philip Spradbery was familiar to many Canberrans for his research, advocacy and activism around the invasive European wasp threat.

Born in the UK, he was a keen Boy Scout as a child and an athlete, student journalist and cartoonist during his Zoology degree at Queen Mary College, University of London. He joined CSIRO as a research entomologist in the battle against the Sirex Woodwasp, a softwood pest that still threatens vast tracts of commercial forestry in the US. The parasitic insects CSIRO bred for biological control in the 60’s continue to be deployed there.

Dr Spradbery spent 40 years with CSIRO Entomology and was a Senior Principal Research Scientist, arriving in Australia in 1971. His research life involved working in 35 different countries worldwide, including more than a decade in Papua New Guinea working on the screw-worm fly, the most serious entomological threat to Australia’s livestock industries with potential annual costs of about $1 billion should it be established here.

In 1988 he chose to leave the CSIRO payroll but remained at CSIRO Entomology as an Honorary Fellow to focus on the passionate interest he had developed in European wasps. In 1993, he established XCS Consulting Pty Ltd, which represented the interests of some 60 scientists and technologists, many of whom had retired from CSIRO or been made redundant during the financial purges of the period.

He was also a key independent player in the United Nations’ Food & Agriculture Organization’s attempts to eradicate the screw-worm fly from the Middle East following an overwhelming outbreak in Iraq in 1996. 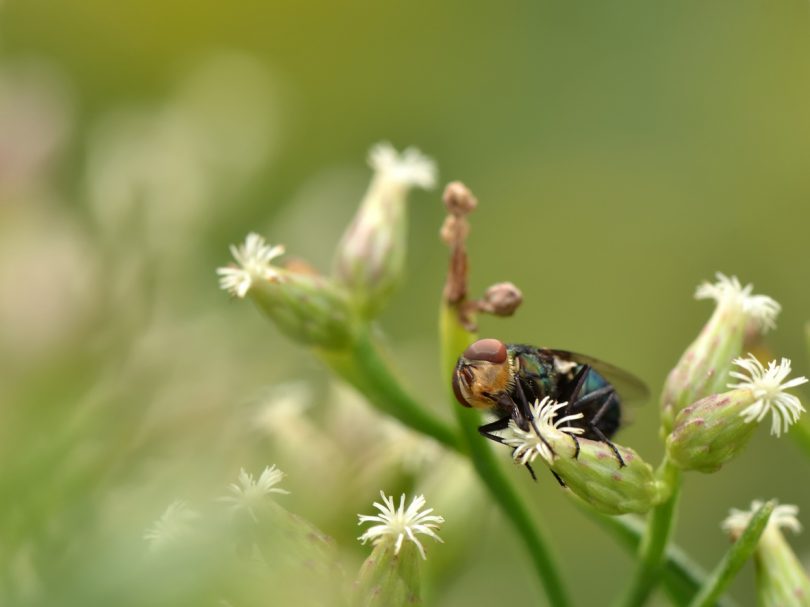 Screw-worm flies are flesh-easting pests that Philip Spradbery has conducted extensive research on. Photo is of a Secondary Screw-worm fly.

Until the end of his life, Dr Spradbery was engaged in full-time research on European wasps and was always a ready source of expert information and advice on dealing with the dangerous pest. He appeared frequently in local and national media stories, rejoiced in the media nickname ‘Dr Wasp’ and provided advice on the dedicated wasp hotline from his Yarralumla home laboratory.

It was a practical concern: plenty of Canberrans have been hospitalised over the years suffering intense pain from wasp stings which last for up to 24 hours. Dr Spradbery, who removed his first European wasp nest when he was a 16-year-old, said the wasps also preyed on important pollinators of native plants, collecting up to 100kg of insect prey in a year.

How to identify a European wasp: they have prominent black and yellow stripes with black spots down their abdomen. Photo: City Services.

Dr Spradbery was a passionate advocate for science in the public good: he worried about whether changes at the CSIRO had diminished the critical importance of entomology and whether young scientists would be forced to travel overseas for research and employment as a consequence.

A keen horticulturist, his front garden had been opened during Floriade, while his back garden was devoted to fruit trees and vegetables, including a precious Seville orange, the keen jam maker’s fruit of choice. The tree was used to produce marmalade that truly reached international standards of excellence: Dr Spradbery once won a Silver Award in the Gardener’s Marmalade category from British-based The World’s Original Marmalade Awards.

He was also a keen sailor and motorist who brought his Austin Healey 3000 Mk III with him when he arrived in Australia.

A lifelong amateur artist and cartoonist, he undertook courses at the ANU School of Art and illustrated many of his own publications.

Pat Gagel - 1 hour ago
Maybe not. I have regularly used the service since 1992. Love it. Still the most sophisticated form of travel. Much better th... View
Marco Spaccavento - 1 hour ago
Pat Gagel I’m not a user. 3 a day also hardly justifies a new station… View
Pat Gagel - 1 hour ago
David Malcolm they aren’t a problem. Believe it or not, biggest issue is a grade crossing on a bend between Bungendore and... View
Property 22

Anthony Willing - 1 hour ago
Paul Mills the same as every old / wheelchair person in every multi-storey in every city in the world.The fire brigade have s... View
Anthony Briscoe - 2 hours ago
Canberra more and more of this type of development will happen under the Barr Government. Just wait till the tram goes to Wod... View
Paul Mills - 3 hours ago
Becoming a common Canberra vista. View
Opinion 36

Brian Kilgannon - 2 hours ago
Frances I think you answered the question. No one uses it so why build it when we have more pressing issues at the moment. It... View
Oan Nbn - 2 hours ago
Leon Arundell but I guess Canberra to Yass need to connected from Kingston without passing CBD and making Light Rail stop as... View
Leon Arundell - 2 hours ago
Justin Watson Examples, please. View
News 5

chewy14 - 2 hours ago
JC, There's 4 comments, who's this mythical blue glasses brigade whatever that's supposed to mean? And I can't see where anyo... View
JC - 3 hours ago
I can see the comments from chewy and the blue glasses brigade. Andrew Barr, Labor/Greens don’t care for business, taking t... View
News 127

assiduous - 2 hours ago
All voters should look closely at the actions of Federal Liberals prior to and post the royal commission into banking and fin... View
Community 20

It looks like next year's federal election will be even more about keeping Australia safe. The Morrison Government will seek...
Best of Canberra 56

@The_RiotACT @The_RiotACT
The challenge is on - teams from F45 in #Queanbeyan and #Ngunnawal are out to win bragging rights in a burpee competition to raise money for the @DVCSACT https://t.co/OQqAuSxZAh (33 minutes ago)