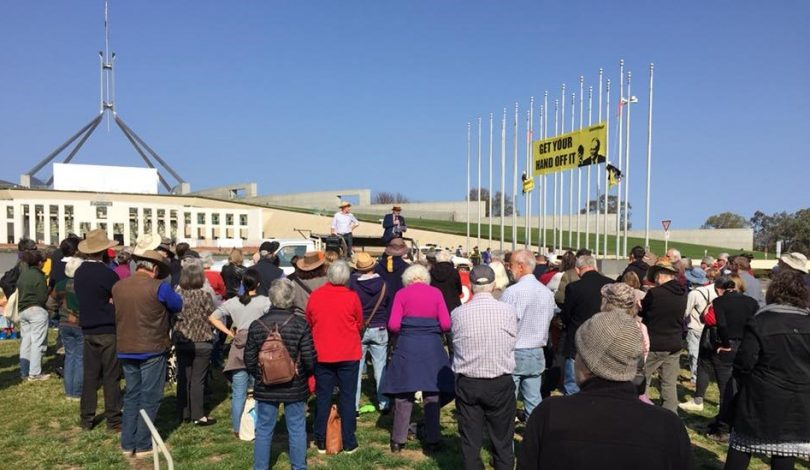 Regional voices have been loud on the first parliamentary sitting day of the new Morrison Government in Canberra.

Farmers from across southern New South Wales have gathered in front of Parliament House frustrated by the new Prime Minister’s response so far to climate change.

“I am really disappointed at the first indications from the Morrison Government, it looks like nothing is going to change, in fact, it might get worse,” says Deputy Chair of Australian Farmers for Climate Action, Charlie Prell.

The Prell family has farmed at Crookwell, north-west of Goulburn since 1904. Mr Prell is currently running around 1,200 sheep but has had to destock his property by two thirds due to the current drought.

“Today (September 10) people quoted the famous Dorothea Mckellar poem about ‘droughts and flooding rains’, she did say that 120 years ago but she didn’t mention anything about the severity or the intensity or the length of the droughts and floods that are happening now, ” Mr Prell says.

“When there are bushfires burning out of control across New South Wales in August and when Tathra gets burnt out by a wildfire in March – that is attributable to climate change.

“Some politicians won’t talk about climate change when there is a disastrous event like a bushfire or a flood or a drought, well it’s about time we changed that.

“It’s beyond belief that these people who call themselves intelligent refuse to listen to scientific analysis,” Mr Prell says. When it comes to science, the Bureau of Meteorology (BoM) and CSIRO have not yet attributed the current drought to climate change, however, they do point to the influence our warming planet is having on current conditions.

“The weather systems of today are occurring within a climate system (atmosphere, oceans, and cryosphere) that is warmer than the past. This has implications for the hydrological cycle (rainfall, heavy rainfall, and drought) and fire weather (temperatures and humidity),” the BoM said last month.

“Attributing individual extreme events to climate change requires dedicated research that takes time to complete. The Bureau also notes the current drought is still ongoing, so the full extent is not yet known.

“Drought in Australia is periodic, and periodically severe, associated with natural variability.

“Climate projections from the Bureau and CSIRO indicate that Australia will likely spend more time in drought and that temperatures will continue to rise.

“Further warming of the planet will also have profound effects during those periods of low rainfall. Higher temperatures mean more evaporation, leading to even drier soils.

“The time in drought is projected to increase over southern Australia with high confidence. The nature of droughts is also projected to change with a greater frequency of extreme droughts,” the BoM says.

The science says similar when it comes to bushfires.

“The observed changes include more extreme conditions during summer, as well as a longer fire-weather season, with dangerous fire-weather conditions occurring much earlier in the season than in the past,” the BoM says.

“These changes are at least partly attributable to anthropogenic climate change, largely through increased temperatures. These trends are predicted to continue into the future.” Mr Prell says many farmers are increasingly frustrated by the standard of climate change debate in Australia.

Reflecting on the current drought and his own enterprise, Mr Prell- who has 12 wind turbines on his Crookwell farm – says renewable energy is helping his family meet the challenges.

“During the Millenium Drought fourteen years ago, my wife and I suffered serious mental health problems, we had no prospect of any future at all, thank god the drought broke,” he says.

“This drought is different, we have wind turbines being constructed on our land right now, the income that I am receiving as a royalty for hosting those turbines will mean that it doesn’t matter so much how long this drought goes on for – I know that we will survive and the two people I employ will survive, that’s the difference.”

Mr Prell and Australian Farmers for Climate Action want more landholders to have that opportunity but fear the government’s support of the coal industry and inability to develop an energy policy linked to climate action limits the growth and development of the renewable energy sector.

Angus Taylor, the Prime Minister’s new Energy Minister is also Mr Prell’s local MP. “He’s not interested in reducing emissions, it’s not even part of his portfolio now, all he is interested in is reducing power prices,” Mr Prell says. “I am really disappointed at the first indications from the Morrison Government.” – Charlie Prell. Photo: Jo Dodds Facebook.

“I want to back farmers because they’re one of the first sectors showing signs of major strain in the face of climate change,” Cr Dodds says.

“We are talking about livelihoods and communities and lives, these people are begging the government to take action.

“These people are the real deal and have come all the way to Canberra on precious fuel to make a statement.”

Mr Prell fears the window for action is closing fast.

“We aren’t going anywhere, we are apolitical, I am not a radical greenie, I am a farmer concerned about the threat of climate change,” he says.

“Regional Australians are disgusted in the political system, that was demonstrated in Wagga two days ago. That freight train is going to run over any politician who doesn’t start listening to people like me.”

What have their Nationals MPs been doing for them for the last 5 years?? Where are the policies tackling these issues? Seems they do nothing unless they’re given a specific ‘envoy’

Spiral - 1 hour ago
I agree that red light running is a huge problem. I see people speed up to make it through a "just red light" and even people... View
Startmeup - 2 hours ago
The most common danger I notice driving around is red light running (which usually involves speeding up or at the very least... View
Opinion 32

russianafroman - 16 hours ago
Terribly underfunded. Around Gungahlin it's hip height. There should be double or triple the amount of mowers. It's not justi... View
News 33

Michael Hourigan - 24 hours ago
Except that it doesn't Joe View
Lloyd Woodward - 2 days ago
Stop with this boomer thing. Im apparently a Boomer, but think this is a great idea. He is just a sad Panda.... View
News 1

2018 was really, really hot. And yes, this is probably climate change

It’s raining! Is the drought over?

@The_RiotACT @The_RiotACT
The Greens will push to triple their representation in the ministry after winning a total of six seats in the 17 October poll https://t.co/E23oREkXUy (34 minutes ago)

@The_RiotACT @The_RiotACT
A dedicated team of volunteers is restoring the tranquil garden at Riversdale homestead in Goulburn to its former glory https://t.co/EupunFCBTe (4 hours ago)