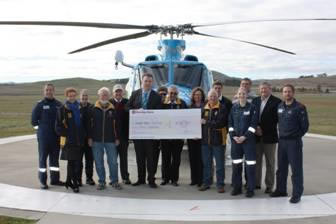 As part of this year’s tenth birthday celebrations, the Capital Region Farmers Market has just announced a very generous donation of $50,000 to the Snowy Hydro SouthCare Rescue Helicopter Service.

“Snowy Hydro SouthCare is a fabulous community service organisation, and we are delighted to be providing a substantial donation to assist with its services,” said Tony Howard, spokesperson for the Capital Region Farmers Market.

Tony is also a member of the Rotary Club of Hall which runs the Farmers Market each week. All profits from the Market stallholder fees are fed back into community, international and youth projects, regional communities and other projects chosen by the Club.

“The Rotary Club of Hall is all about assisting with what’s best for the community and we were hard pressed to find a more worthy cause than saving lives, which is what Snowy Hydro SouthCare does so well.

“And as the primary provider of aero-medical and helicopter services to people in the ACT and South-Eastern NSW, many of the Capital Region Farmers Market’s own stallholders and customers have been positively impacted by the work that they do,” Tony continued.

One of the Market’s regular stallholders, Paul Gatenby of Tall Paul’s Oysters from the Clyde River at Batemans Bay, has been personally impacted. His son Mitchell required the services after a serious car accident in December 2012. Mitchell was trapped in his car for over an hour and was airlifted to The Canberra Hospital where he went straight into surgery.
Mitchell’s injuries were extensive but he is alive and well today, and Paul believes Mitchell would not have survived had it not been for the Snowy Hydro SouthCare team. Paul says he is “over the moon” that the Capital Region Farmers Market is making such a kind donation to Snowy Hydro SouthCare.

“We know first-hand that the services provided by the Snowy Hydro SouthCare Rescue Helicopter truly have the potential to affect many people’s lives at some stage,” Tony concluded.

All visitors to the Capital Region Farmers Market will be able to see the Snowy Hydro SouthCare Rescue Helicopter up close as it’s been invited to fly in to the Market to raise awareness of the service and support from Rotary Clubs across the region. The ‘fly-in’ will take place on Saturday 5 July at 9am, Exhibition Park in Canberra (mission pending).
For more information on the Capital Region Farmers Market visit www.capitalregionfarmersmarket.com.au

Tim Hough - 8 hours ago
That's some crazy conditions. I'd only find them borderline acceptable if we were guaranteed a Matildas match, but even then... View
Property 17

Tom Rilly - 11 hours ago
Why should the govt step in just because a developer stuffs up??? View
Lifestyle 31

Rob Thomas - 11 hours ago
Gabriel an Australian politician? Oh he probably is. View
Russell Nankervis - 14 hours ago
Lol a Liberal saying others are killing democracy. How ironic. View
Charlie Church - 14 hours ago
Sheridan New honestly would trade it for anything right now. View
News 4

Murray Emerton - 12 hours ago
Why can’t we get direct flights from Canberra to cairns. I would be on that!!!! View
News 14

chook58 - 14 hours ago
The RIOT article is more propaganda by the ACT Government. As a front-line protester and eye-witness there is nothing "humane... View
Community 1

@The_RiotACT @The_RiotACT
The Liberal and Labor candidates are neck and neck in Eden Monaro as the vote goes down to the wire and preferences run wild https://t.co/dG673PvvM6 (7 hours ago)

@The_RiotACT @The_RiotACT
Local jewellery designer Krystal Hurst is a proud Worimi woman who uses her creations to provide a sense of freedom and to connect with her culture and ancestors. She is a finalist in the Telstra National Aboriginal and Torres Strait Islander Arts Awards https://t.co/MtPLGJ3WwH (9 hours ago)

@The_RiotACT @The_RiotACT
Canberra's residential property market has posted a 6 per cent rise in home values for the financial year despite the COVID-19 economic downturn, according to the latest data from CoreLogic https://t.co/wYoWLboKSL (11 hours ago)