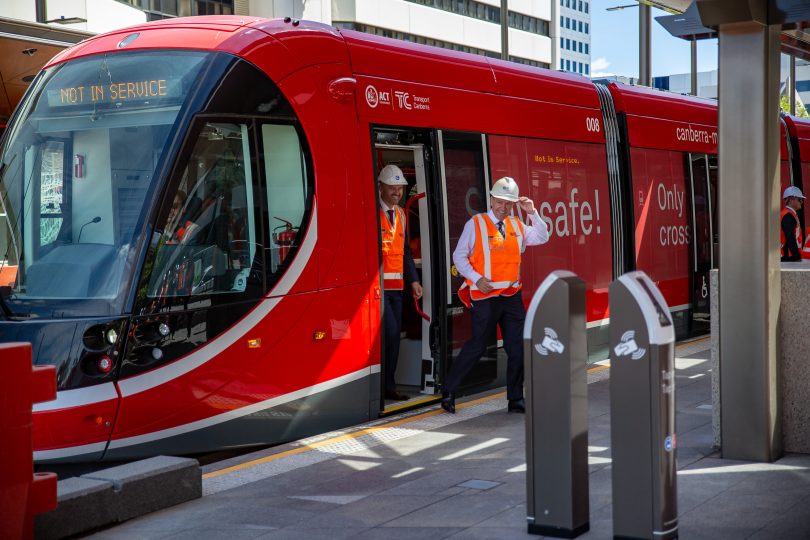 “Everything has changed,” says an exultant Chief Minister Andrew Barr, welcoming Federal Labor’s $200 million commitment towards the construction of Stage 2 of the light rail network to Woden, should Bill Shorten win government at the Federal election in May.

Whether it will be enough to breathe new life into the Barton dog-leg is debatable but the Chief Minister obviously has a plan B.

The focus, he says is on not so much the alignment but where the stops will be.

“Clearly, a different route to State Circle would require changes to the National Capital Plan which would be a longer process,” he said at a press conference in the city with Mr Shorten, Transport Minister Meegan Fitzharris and ALP candidate for Canberra, Alicia Payne.

But taking that path of least resistance doesn’t rule out some sort of compromise that allows the route to service those parliamentary zone hubs.

“We’ve got to be able to service the people who live and work in and around those precincts,” he said.

Mr Barr said Cabinet was still considering the route alignment and the business case but Federal Labor’s commitment was timely and significant.

“We could have spent millions and millions of dollars going down various paths that the Commonwealth wouldn’t ultimately support because in the end they had no interest in supporting the project,” he said.

“It’s a very clear statement that the Shorten Government would work with the ACT Government to deliver the project that will meet our city’s future transport needs.”

This made a massive difference and having a cooperative Federal Government could help reduce the cost of the project, touted to be $1.3-1.6 billion, by the smoothing out the parliamentary approvals process and not forcing the ACT Government to jump through unnecessary hoops. 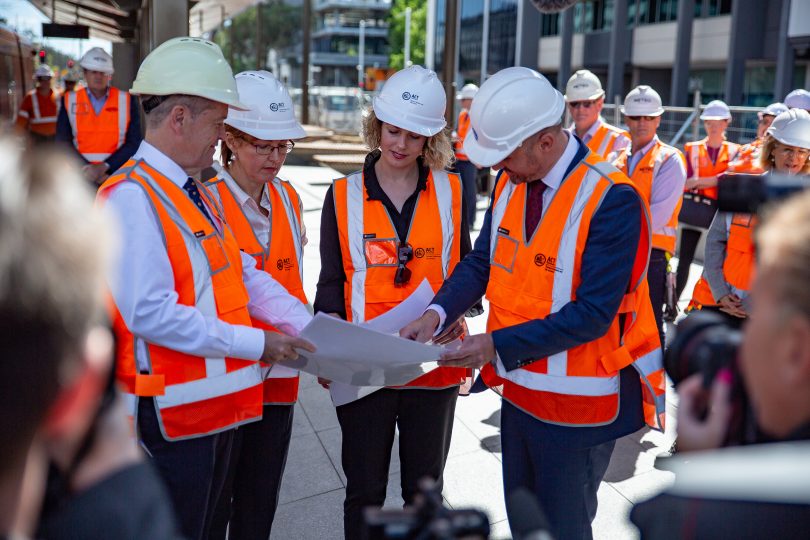 Mr Barr reasserted the public transport aims of the project, calling it a congestion buster that intended to cater for the travel needs of Canberrans, particularly the people working in the parliamentary triangle, well into the future.

He said the city was growing by 10,000 a year. “You think congestion is bad now, if we don’t make this investment now we will go down the path of Sydney,” he said.

Mr Shorten said the ACT’s light rail project was the way infrastructure should be built in Australia, saying it would be great if the ACT could roll seamlessly from Stage 1 into Stage 2.

He said the commitment ensured the ACT Government could continue planning the project knowing it would attract federal support.

Mr Shorten said the project was an example of Federal Labor’s determination to work with states and territories to tackle traffic congestion and create jobs in Australian cities.

“Labor will invest in public transport projects that will make a real difference to people’s daily lives in Canberra and create secure, local jobs,” he said.

Mr Shorten said that on current population projections, 210,000 people will live within a kilometre of the Woden corridor by 2041.

“Canberra is our nation’s proud capital and we will make sure this beautiful city shines and has the right infrastructure to attract new tourism and economic opportunities,” he said.

“Better public transport takes cars off our roads and makes our transport system more efficient, which in turn sets the scene for stronger economic growth and job creation.”

Mr Barr relished the prospect of having a Federal Government actually interested in the national capital. “We have all had a gutful of being told we live in a bubble, that this place is not real,” he said.

Meanwhile, Canberra Liberals transport spokesperson Candice Burch said Federal Labor’s commitment was premature, given the lack of a business case or a cost-benefit study for the proposed route.

“The Labor-Greens Government is yet to release a business case or any kind of analysis into different route options. Given the loss of the Barton dog-leg, and increased travel time between Woden and the City when compared to current buses, the benefits of Stage 2 are still unknown,” she said

“The Labor-Greens Government must release a business case as soon as possible, so that Canberrans have full transparency of this proposed project.”

Only if they use it for trackless trams, not 19th technology.

We had roads thousands of years ago – roads are ancient technology. Metal on metal is more efficient than pneumatic tyres. Trackless trams are just buses!

Rail isn’t just 19th and 20th century, but is still superior than anything in the 21st century.

What we have now – especially in places that haven’t actually used – any public transport, or never been on rail – is called siderodromophobia – a fear of metal rails.

Either that – or just some obsession with pneumatic tyres and having bitchumen everywhere – when rail could have grass between the tracks – or easily be elevated.

The idea of road vehicles taking preference to rail started over one hundred years ago – when buses went ahead of trams to steal their patronage. However, in many cases buses worked with trams, extending from the tram termini to rough terrain or areas of low population. Today, a proper metropolitan city has this worked out.

Walter Burley Griffin thought of the people before the politicians – and had a rail design in his plans – that were neglected in favour of the ‘everyone-for-themselves’, competitive American penchant for freeways and flashy cars.

Brisbane’s Labor’s Clem Jones thought everyone could drive and wanted freeways like USA. Australia grabbed on to these American ideals as the Americans started to regret what they had done.

The trams in Brisbane were great- while Clem thought buses were more modern. We were near the tram terminus, and this it should not have been cut but extended to the new Garden City shopping centre and so on.

No – going to pneumatic tyres was a backward decision in the sixties, and NSW is repeating this backwardism now by ripping out railway lines that are the only equitable way for everyone to get around.

Could Stage II please have a better gender balance than the 90+ per cent male workforce that worked on Stage 1? Why aren’t women being given jobs out of this billion-dollar expenditure? Where’s Labor’s “strong record on gender”?

The Stage 2 project will do better with support from both levels of government, which appears to be inevitable now. Will also remove some bureaucratic hurdles previously put up by Feds. I find the shock-horror light rail near Parliament House argument hilarious. Cars all over the place there not affecting heritage values but light rail….nooo never. Caught a Melbourne tram past their Parliament House last week – heritage still ok there.

As I have said on other related posts though, the solution is not to go through, but UNDER the lake and the triangle, coming up wherever they want along Adelaide Avenue.

Given its within our power to drain the lake while the construction and waterproofing is underway, it’d be a good opportunity to go and retrieve all my fishing lures I have lost along the Black Mountain Peninsula as well 🙂

The ‘Country’ Labor Party is as Backward here as the Nationals, and some of the Greens – who all want to treat the wealthy to cycling tracks and privitising the rail corridor for CSG gas pipelines to the wealthier ones in Byron Bay.

We cannot vote Liberal in our northern regions – but because we don’t have democracy, and Sydney people think that $2.2billion wasted on sports stadiums is OK, we are continually downgraded into a third world conditions.

Of course they do – they are clinging to straws 😂😂

Hang on, why’re people gonna vote for a second stage of something which has so far only proven to run red lights, lower speed limits and hit people on their morning walk to maccas to get a sausage and egg McMuffin. Labor needs to wake up and smell the hash browns

Oh dear. You won’t win votes with that.

Yep Canberra needs useless infrastructure like a hole in the head.

Yep Canberra needs useless infrastructure like a hole in the head.

Naw, barely across the lake… call it C’wealth Park stage 2.

Geoff Best did I mention that’s only one rail though….

Robbie Wallace ha ha…. is that going to be like the single lane roads the idiots built out of gunghalin? The second sail will come later

Geoff Best nah they’ll never get a 2003 type bushfire ever again…. they only happen on the south side anyway….

Not even a dent 😞

Ah, the smell of election pork is already in the air.

So if we get the southside white elephant, a federal Labor government will kick in for a nice howdah – yippee! – and Canberrans will pay for all the other upfront and ongoing costs through rates, rent (land tax), hidden taxes in utility charges etc. etc. etc. and, no doubt, further additions to our growing public debt –

Daniel Duncan no they’re trying to lose an unloseable election. Wake up Andrew Leigh. It makes no sense

I want the tram and I’m still not voting for the #ALP or the #LNP. They have to do better.

Easy to promise the world when you know you won’t have to deliver because you are about to be turfed out.

NSW Govt into it in a big way too Bill. John Barilaro’s promises to Eden Monaro for roads, schools and other things is a massive amount of money. State govt might just sneak back in though. Bit more problematic for Feds.

And today from John “Pork” Barilaro $750,000 towards a respite centre in Queanbeyan. Open cheque book. It’s a bit rude though to suggest that people need respite from Queanbeyan😉😉.

Bill Jackson
Ahh Labor aren’t in power so how will they be ‘turfed out’?

Stephen Page-Murray Whoops. Read that incorrectly. Thanks for pointing out.

Got it now Bill. I guess the connection from eye to brain is still not fully recovered.

Anthony Costa Nah. Think they will win Federal Election in May but NSW election in March will be very tight.

Bill Jackson suggest you learn the facts about the

pork-barrelling
noun INFORMAL
the utilization of government funds for projects designed to please voters or legislators and win votes.
“the major parties have hijacked the elections with their shameless pork-barrelling”

There needs to be an assessment of light rail and alternatives such as a busway. The Barr-Rattenbury government’s unwillingness to do such analysis suggests it fears the analysis would indicate light rail does not perform well. Mr Barr show your government is competent and responsible and do the assessment. We need to use funds as wisely as possible given the many unmet needs in the community

So. It’s not just the LNP digging into the bacon bin.

Seriously?
How are they going to pay for all their promises?

With our money, of course.