Gal about town Fenella Edwards has released her first music video which we now present for your enjoyment.

MC Me by Feline 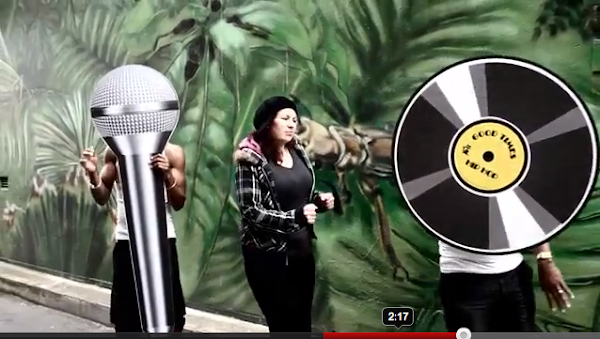 In response to your comments:

Yeah, these lyrics were actually written in 2006 and the song does speak more for me back then than it does for me now; a whole 5 year chapter of moving to Canberra to be a public servant is not reflected in the song to start with!

In 2011 when I came to rerecord this track (having outgrown its original 85 BPM I sped up my instrumental to 96 BPM) I found I was spitting lyrics that were no longer true and had to make some changes. Instead of spending time thinking about how I could properly update the song (including evolved impressions of what being an MC means to me) I simply replaced outdated words/numbers with their contemporary equivalent (e.g. “10 years ago I barely listened to rap” replaced “5 years ago” and ‘4 years’ spent at uni was now ‘5’) – I knew at the time this solution wasn’t perfect but I was keen to rerecord the track so we could start working on the film clip!

It’s considered impolite to post video or pictures of your self in front of other peoples artwork (I’m talking graffiti on legal walls before any of you angsty Canberrans take exception to graffiti as a legitimate art form).

I did not know this was considered impolite, I love all elements of hip hop and wanted graff to be represented. The story is about me and hip hop, I needed more visual depictions of the culture! I’m not trying to claim I was responsible for any of the artworks featured in my clip, I thought that was what was rude when it came to photos in front of others’ art? Even in the shot where I am pretending to spray paint I have chosen a more amateur tag to do so over, trying to reflect my own level of hip hop rather than posing in front of the best art I could find and fronting like that’s my level.

I reckon I’m ok to shoot in front of that cat piece despite not having painted it – since it was painted for me!! I reckon the other interstate artists who painted the near the cat wouldn’t mind me filming in front of their work either. If it was me I’d be stoked to see my artwork in a film clip, especially if the art had a high risk of being painted over!

Thanks for your feedback

fair enough she is doing her thing but I cant get into this because lyrics that include you went to uni blah blah blah and wasn’t a fan of hip-hop 10 years earlier seems to me someone is jumping on a wagon and she is trying hard to be cool it gets to me that she raps about that in the first place she is just sounding stupid .. the film clip is whack as possible and seems like she is very out of place but thats my opinion i agree with Havok

My thoughts exactly. Whilst Hip Hop is a legitimate culture open to anyone and everyone you can’t just decide you’re going to be “Hip Hop” because it’s more interesting than the current genre of society you align yourself with.

Not being au fait with street culture – are you not allowed to film graff?

It’s considered impolite to post video or pictures of your self in front of other peoples artwork (I’m talking graffiti on legal walls before any of you angsty Canberrans take exception to graffiti as a legitimate art form).

fair enough she is doing her thing but I cant get into this because lyrics that include you went to uni blah blah blah and wasn’t a fan of hip-hop 10 years earlier seems to me someone is jumping on a wagon and she is trying hard to be cool it gets to me that she raps about that in the first place she is just sounding stupid .. the film clip is whack as possible and seems like she is very out of place but thats my opinion i agree with Havok

I thought graffiti only existed so that musicians could be photographed in front of it?

When you see credits that long, with the same names repeated over and over next to multiple jobs, you basically know what’s to come.

Not being au fait with street culture – are you not allowed to film graff?

And I assume whack means good and you can’t get the tune out of your head.

Someone please stab me in the eardrums so I can get the noise of this out of my head.

And Fenella, don’t going around filming other peoples Graff

Buck Johno - 28 minutes ago
From what I remember of night rider busses it was only over summer. View
PE TE - 9 hours ago
Sean Bishop but the Uber rapes have increased View
Kim Rumble-Kozjak - 19 hours ago
Jacqleequack it was all good fun until the two hour wait in the cab line, in stilettos, without a jacket in -2 🥶❄️ View
Property 28