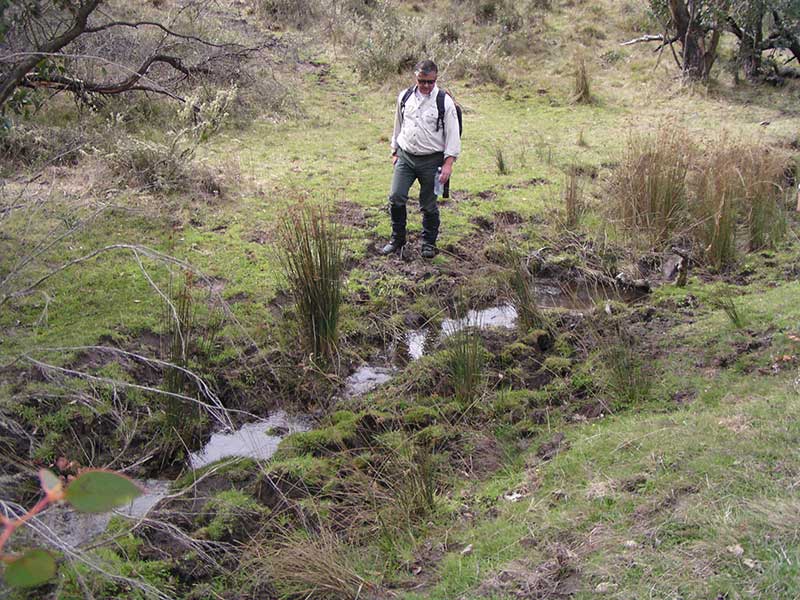 The Bogong High Plains is at risk of becoming the “Bogong Horse Plains” if delays continue in Parks Victoria’s implementation of their feral horse removal plan, according to Invasive Species Council CEO Andrew Cox.

His judgement has been bolstered by expert advice from the Australian National University’s Professor in Environmental Science, Jamie Pittock, who says the horses’ impact on the alpine environment across state borders is beyond dispute, and that heritage arguments are “nonsense”.

Mr Cox said bushland trying to regenerate following the devastating summer bushfires needs relief from grazing and trampling, and that the Bogong High Plains is severely impacted by an estimated 100 feral horses in the region, plus approximately 5000 wild horses in the eastern Victorian Alps.

“Horse numbers in both the Victorian and NSW Alps have more than doubled in the past five years,” said Mr Cox. “Horse control needs to commence urgently, alongside existing deer, pig and goat control programs that have already been underway since January.”

“This is four government [entities] who usually can’t agree on anything, employing Australia’s best wildlife counters surveying the entire Alps from the air,” said Professor Pittock.

He said the surveys showed the horse population in the alpine regions was increasing by 23 per cent each year. Even considering the 2019-2020 bushfires, which burnt one-third of Kosciuszko National Park, there was little evidence those numbers had diminished.

“I went up in a helicopter after the fires and saw no dead feral horses but far too many live ones,” said Professor Pittock.

He dismissed the heritage argument of pro-feral horse proponents as “nonsense”, and contradictory to historical evidence of landholders’ efforts to eradicate wild horses in the late-1800s.

He added that an absence of credible evidence is “part of the reason why they’ve lost two big court cases this year”.

“Their argument is about as illogical as saying to a farmer, ‘You shouldn’t control rabbits because they look cute,’” said Professor Pittock.

He said the evidence was unambiguous around wetlands. “They [feral horses] go to stream banks and bogs to graze particularly palatable plants and to access water and turn this habitat into a boggy wasteland,” he explained. “The horses are trampling the alpine bogs, destroying the habitat of threatened plants and animals such as the broad-toothed rat and alpine she-oak lizard, and damaging Indigenous sites.”

Pigs, deer and goats are also a problem, but are controlled by widespread shooting programs in NSW and Victorian parks.

“The horses also destroy the alpine habitats of the highest ecological significance, where there are few pigs and deer,” said Professor Pittock.

“No-one likes shooting horses, but no other control method works and they cannot coexist with threatened flora and fauna species in our alpine national parks.”

Worldwide examples of wild horse populations have been cited as best practice by pro-brumby groups. But Professor Pittock said they, too, had been disastrous, citing the US Bureau of Land Management.

“They haven’t been able to keep feral horse population numbers at sustainable levels, have been going broke agisting the thousands they’ve captured, have been unable to re-home, and have been scandalised through questionable sales of horses to Mexican abattoirs,” he said.

Legal action has been ongoing since a Federal Court ruling on 8 May which found the removal of feral horses from the Bogong High Plains and eastern Victorian Alps was unlikely “to have a significant impact on the national heritage values of the Australian Alps”.

On 29 May, the Supreme Court of Victoria ruled that Parks Victoria was not required to consult with the community in its decision to cull Alpine National Park brumbies by method of shooting. Pending any further appeals, Parks Victoria will not commence culling before 9 June.

Professor Pittock said there had been two court rulings in favour of Parks Victoria.

“When will they be able to get on with their job of protecting the park?” he asked.

“It’s ironic those seeking to protect the horses today were claiming to represent the traditions of people who chased, rounded up, trapped and killed hundreds of horses.

Again, as a person who regularly walks the Kosciuszko National Park and Victorian Alps, the REAL damage is being caused by feral pigs (soil and bogs) and deer (ring barking small trees).

And don’t get me started on the rabbits, foxes, dogs and cats.

These six feral animals are posing a far greater threat to the environment than the wild horse population.

Feral pigs and deer have control programs in place. Acknowledging the damage caused by other feral animals in no way justifies inaction on the known impact of feral horses.

And the control programs aren’t working for those animals. I understand that a recent census of Brumbies put the population between 7,000 to 9,000 horses. That’s hardly plague proportions for areas as large as the KNP.

Pigs, dogs, cats and rabbits breed multiple times a year with litters of young and displace and kill more native fauna and flora than the Brumbies ever could.

And all of those feral pests are being controlled. The horses should be no different.

And as somebody who hunts the VIC high country every other weekend, I’m yet to see evidence of a pig problem there. Plenty of deer and horses, but not pigs.

And again, the decades of scientific research in the area shows you’re wrong.

If you can present actual scientific evidence beyond meaningless anecdotes that would refute the clear evidence of feral horse damage then do so.

But even if you were right, are you seriously suggesting that we shouldn’t control one feral animal who damages the environment because there are others that damage the environment?

You do realise that we also shoot feral pigs, deer (and the others) in far greater number than what is proposed for the feral horse cull?

“Their argument is about as illogical as saying to a farmer, ‘You shouldn’t control rabbits because they look cute,’” said Professor Pittock.

I’m not going to get into an argument about decades of so called research. Scientists have a vested interest in saying such things to receive government grants. I have been hiking and camping in these areas for over 30 years and do it for the love of the outdoors. In that time I have never come across researcher, scientist or crackpot greenie in my hikes or camp sites.

Says every single person whose cognitive dissonance makes them believe anecdotes are the same as proper research.

Rowan Hartcher - 10 hours ago
Alan Hopkins like wise View
Peter Quinn - 11 hours ago
So when can we celebrate colonisation????. Whatever day is nominated it will always be contested View
Alan Hopkins - 11 hours ago
its not that hard to change the day. just do it... View
Opinion 24

Magpie Allan - 18 hours ago
Undoubtedly the two icons are among two of the greatest men you’ll could ever meet.... View
Breaking 5

@The_RiotACT @The_RiotACT
This week’s newsletter covers everything from a sumptuous Lebanese breakfast spread to algae in Canberra’s waterways to lively discussion around Australia Day https://t.co/hyR7zinwv6 (7 hours ago)