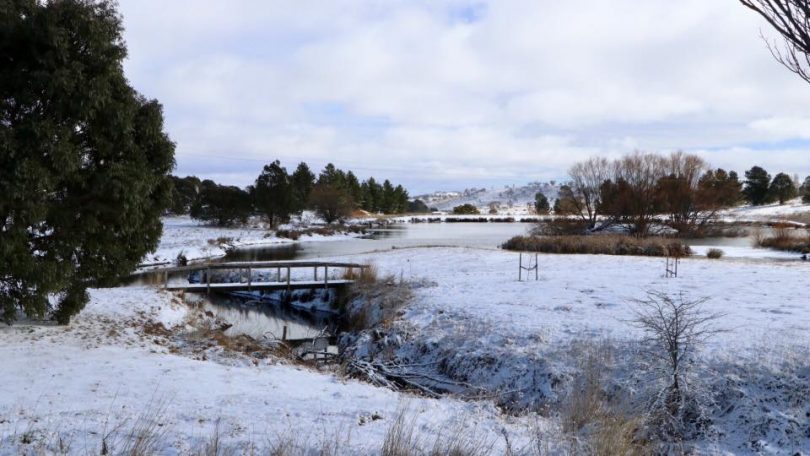 The fire and ice South East NSW has experienced this last week is part of a bigger weather system that will play out over the months ahead.

Within the space of a 10-minute drive, some Monaro and Bega Valley locals have been able to travel between a raging bushfire that has wiped out three homes and a thick carpet of snow that calls for tobogganing and snow fights.

“Fire and snow over the south-east in August is very rare and probably unprecedented to this degree,” says Sean Carson from the Bureau of Meteorology (BoM).

“Why is this happening? It’s dry, anything dry will burn when you add a spark no matter the season.

“The normal spring windy months of August to mid-October have also been early this year.

“Even without rain, frosts and dew can keep ground fuels moist through the winter months, but alas we have had windy dry nights predominantly as well,” Mr Carson says. On top of the early winds, the BoM says, Australia has just experienced its second warmest summer and fourth warmest autumn on record leading to a rapid and intense drying of the landscape, the sort of fire conditions that typically occur at the end of spring.

“Weather goes in cycles and we have been drying out a fraction each year since. We are due for a strong El Nino which delivers heat, fire, and drought; normally its a 7-year average cycle, but we have not had one this decade.

“If El Nino takes hold as predicted we are in for a long hot summer.

“As El Nino breaks down, we usually see good rainfall to mark the demise which will traditionally be next autumn,” Mr Carson says. Despite the forecast of a dry spring and summer, some rain is forecast for the coming week for South East NSW. Photo: BOM.

While the westerly winds of winter 2018 have dried the landscape they have also protected and added to the snow cover at the ski resorts.

“Westerly winds bring snow associated with cold fronts moving through the Southern Ocean, we have had at least one cold front a week since the opening weekend of the season,” Mr Carson says.

“Because the Indian Ocean has cooler water than average right now, we are not getting any or just minimal rainfall in those north-westerly winds ahead of the front, so it’s been sun then snow, sun then snow as opposed to a pattern of sun, rain, snow and so on.

“Those winds have been blowing hard now for 6 weeks, but as I look at the charts, the next fortnight shows the first sign of a decent break from those westerly winds, in fact, easterly winds are forecast which will increase the chance of rain on the coast,” he says.

“The good news is that there is almost 2.5 metres of snow at 1800 metres and half a metre of snow at low elevations, so the snow base is in great shape to see skiers out to the October long weekend no matter the weather patterns ahead.”

And always looking for a wave, the Mollymook based forecaster has his board and wetsuit ready, having noticed a change in Nimmitabel’s weather patterns.

“I surfed today and it was very raw, affected by strong southerly winds, but it was great to see some size again for the first time in 6 weeks,” he says.

“The westerly winds that have been bringing snow up high have also been blowing our oceans flat.

“You may have noticed Nimmitabel on the eastern ranges has had very little snow this winter, the past weekend was one of the very few snow falls.

“When it snows at Nimmitabel you can guarantee the swell will follow because it means the cold front and associated low is moving south-north which means a big swell will be pointing at our coast.

“When the cold fronts come from Adelaide then they are west-east in projection and the swell is pointing at New Zealand, so great to see some snow at Nimmitabel because it means some waves on the coast,” Mr Carson smiles. Bemboka Peak burning at 1 am on August 21. Photo: Helmut Eder.

While the immediate forecast holds some positive news for skiers and surfers, fun in the mountains or on the coast will only serve as a reprieve ahead of bushfire preparations at home.

The recent fires in the Bega Valley and elsewhere have been devastating for a few, but as Mr Carson points out, had they occurred in a couple of months’ time amidst higher temperatures, then the devastation would be far greater.

“If you can take a positive out of the recent fires, with respect to those who have lost homes, they have been very effective in reducing fuel loads ahead of a worrying trend for the summer ahead,” he says.

*This article first appeared on About Regional.

Peter Mackay - 19 hours ago
Sean Kinmonth Think about it. Self-driving vehicles are on Australian roads right now, and every year there are more of them... View
Sean Kinmonth - 23 hours ago
Peter Mackay do tell were your information for self driving cars being implemented before the trams are paid off comes from?... View
Maddison Farrawell - 1 day ago
https://youtu.be/17cxH9p-xps View
News 3

@The_RiotACT @The_RiotACT
RT @AHCPhoto: Today my son Thomas took this heartbreaking shot of a Kangaroo wiping the smoke/dust from its eyes whilst fire spreads out of… (27 minutes ago)

@The_RiotACT @The_RiotACT
The Casino Canberra saga has taken another twist with the sale of the operation falling through after the parties failed to win approval from the gaming regulator in time to meet the deal's deadline https://t.co/jh3sZfGECz (2 hours ago)