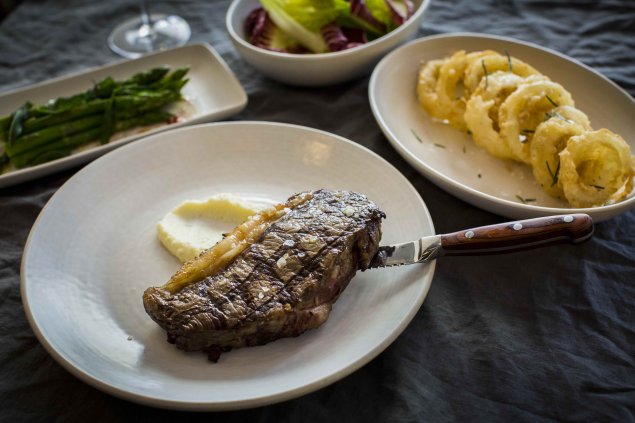 Chifley’s Bar and Grill, set in the newly redeveloped Hotel Kurrajong, looks set to raise the bar when it comes to steak restaurants in Canberra.

I was invited to sample the new menu at Chifley’s Bar and Grill, which is run by award-winning chef Mick Chatto (formerly head chef at Italian and Sons and Artespresso).

The restaurant setting is a combination of new and old. It stays true to the history of the site with only subtle splashes of modern elements. For interested readers, the builder who built the Hyatt Hotel and the old hostels – now New Acton – also built the Hotel Kurrajong.

Both the menu and wine list are extensive. Upon arrival my friend and I were greeted by head sommelier Catherine Sharland. As the former sommelier at Rockpool Perth, Catherine has extensive experience in compiling wine lists. To kick things off we were offered a glass of Veuve. While we waited for the first course I explored the wine list further and discovered that Catherine has included a range of local wines as well as drops from France, Italy and Spain.

The first starter was a bold and beautiful dish of fresh Tathra oysters served with red wine vinaigrette, rock salt and a dash of lemon. This was followed by yellow fin tuna tartare with Lilliput capers, yolk dressing and celery salt. This was one of my favourite dishes from Mick’s other restaurants, and it’s clear that it’s a clear winner at Chifley’s Bar and Grill too.

Next we tried the southern rock lobster with peach salad and little cooling jellies. The lobster was to die for and I was left wanting more. However, sometimes less is more, and the combination of the peach and lobster was very enjoyable.

This was followed by sword fish nicoise with beans, tomatoes and quail egg. The sword fish was soft and delicate and tasted as though it had been caught that very same day.

Now, for the main event: steak time. I was keen to try the steak as Mick is trying to position the restaurant as a premium steak house. Cuts range from $29 all the way to $169 for a 300g David Blackmore wagyu that is 600-day grain fed. We were treated to a 500-day rationed 250g Shio Kin wagyu from Queensland. I’m a medium rare kind of guy and my cut was perfect and soft. This was the best steak I’d eaten in a long time, and I’m looking forward to going back.

The wine list is pretty decent and reasonable mark up too.

Marisa Navarro - 9 hours ago
Linda Navarro i’ll just keep them! View
Bek Clark - 10 hours ago
Lucinda it depends on the category; and while it was a different specialty I can confirm, private specialist consult with a d... View
Paige Johnson - 10 hours ago
Why though? Shortage of staff/surgeon? I’m genuinely curious to know why. View
Community 3