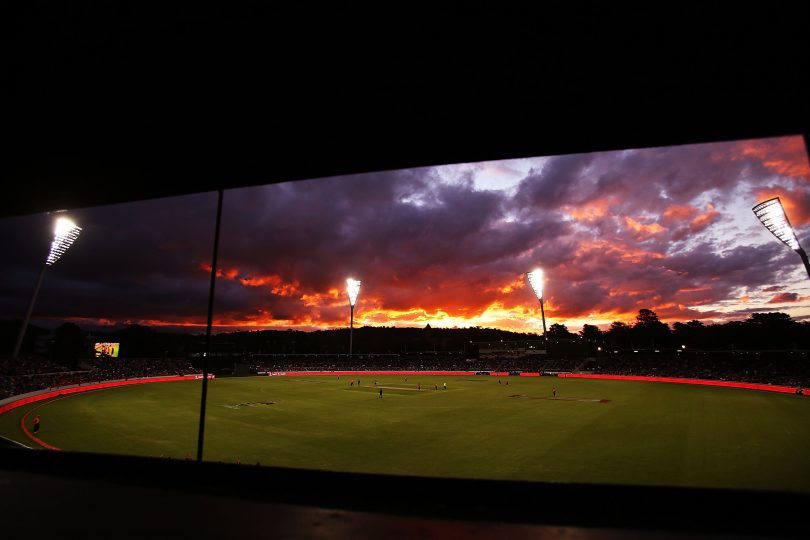 Manuka Oval provided a spectacular venue for the Big Bash League final match between the Sydney Sixers and the Perth Scorchers in January 2015. Photo: Supplied.

Australia is currently ranked number 3 in T20 cricket (equal with England). If Australia can beat Pakistan in this three-match series, there is an outside chance Australia will assume the mantle as the number 1 ranked T20 side in the world. Not bad momentum to take into next year’s T20 World Cup in Australia!

Watching Steve Smith of late has been likened to watching the legendary Sir Donald Bradman. There is no doubt he will go down as one the greatest cricketers in the modern era, if not of all time. Don’t miss the opportunity to witness up close Smith’s quirky, fidgety mannerisms and a modern-day batting genius at work.

3. David Warner is back

Warner is back in prime form so be prepared to catch some of his monstrous 6’s on the hill and in the stands. He scored 217 runs against Sri Lanka in their series last week without being dismissed – an impressive feat earning him Player of the Match for all 3 games.

4. Pace bowling at its finest

Australia’s bowling is sure to be lightning-fast, with a line-up including the world’s number 1 ranked fast bowler, Pat Cummins, Mitchell Starc and Billy Stanlake. However, we’re not the only team with bowlers firing at 145 km/h (and then some). Wahab Riaz and Mohammad Irfan reportedly bowled with express pace during the tour match against the Cricket Australia XI. Pakistan is ready to give our batters a run for their money.

5. Manuka is the highest-scoring ground for white-ball cricket
Famous for being a batter’s haven, Manuka Oval is one of the best grounds in the world for white-ball cricket, proudly holding the record as the average highest scoring ground in short-form cricket. This is also the first-ever Men’s International T20 match at Manuka so be sure to come along and be a part of history once more! 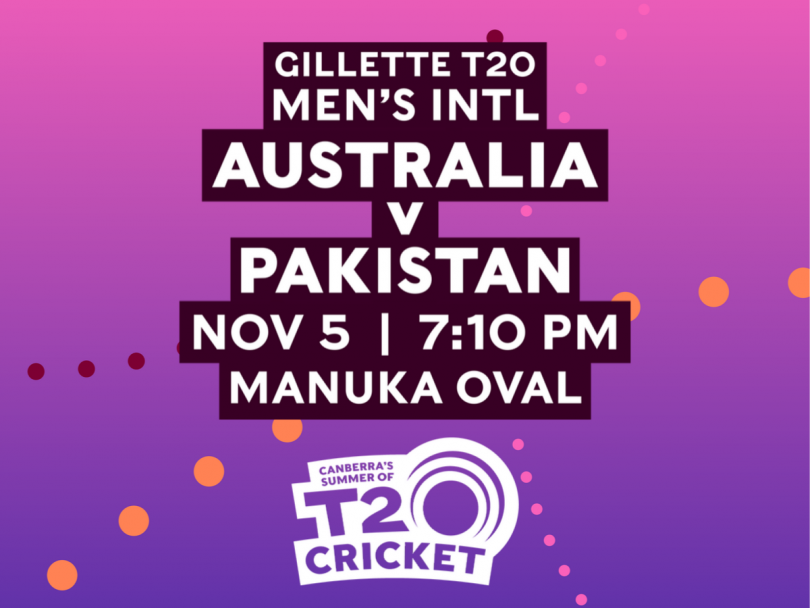 Mustafa Shah are you going to this?

James Watson! You and Rex should go 🏏

Oiledpengu - 21 minutes ago
Cos poor people shouldn’t be responsible for their actions View
Jimbo Lambert - 1 hour ago
Justo Justo some people have driven that stretch of road for 30 or 40 years at 60km/h. If they suddenly reduce the limit it i... View
Dean Soccol - 3 hours ago
Nathan Grieve in Queensland every time we get a fine we lose points. So if you are one of those that don’t care about the m... View
Community 2

Ann Gugler - 23 minutes ago
I met Alan many years ago and hopefully I have copies of all his books, but I will keep an eye out for others just in case I... View
Opinion 7

austted - 56 minutes ago
There is a good reason why our early settlers planted deciduous trees near their houses. We need to get away from this myth t... View
TimboinOz - 5 hours ago
We have three gum trees close to the street - probably in TCSS's area, and I wouldn't be without them. Yes, there's a risk. View
News 33

phydeaux - 57 minutes ago
I doubt the present value of the QR system compared with its original use, although I am extremely confident it never did hav... View
phydeaux - 1 hour ago
TheSilver, I recall you have previously been asked for the references for those studies but I do not recall seeing a response... View
jorie1 - 1 hour ago
I disagree with you. The governments over-reacted and there will be a big backlash against them for the way they have mistrea... View
Community 8

When David Grimshaw purchased a replica German World War II tank from the Australian Armour and Artillery Museum, he didn't...
*Results are based on activity within last 7 days