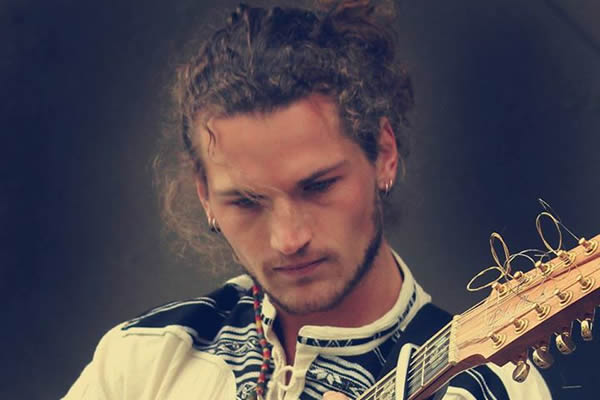 Smooth blues, complex guitar melodies and some fabulous vocals are just three of a plethora of reasons why Guyy Lilleyman’s self-titled EP is so promising.

Harvesting sounds from around Canberra and utilising a talent that’s so often under-appreciated, Guyy’s EP exemplifies the aptitude nestled among Canberra’s local artists. In it, he’s put together a collection of songs that truly dignify the Canberra folk-acoustic scene in a way that demands nothing but pure appreciation.

His music resonates with an old-soul blues vibe, indicative of the passion that drives his sound but is nothing short of unique – his pedal effects and skill on the strings making his music unmistakably “Guyy”. In particular, Guyy’s 6 minute instrumental piece ‘United’ exhibits some pulse quickening picking styles reminiscent of artists like John Butler and Andy McKee – a musical direction that seems only fitting for the magnitude of talent displayed.

“Wake up” contributes an intoxicating arrangement of funky blues guitar and enticing vocals to the EP, a tantalisingly up beat track that will have you turning it up louder. Guyy comes off as the bashful boy next door, but the music he produces is anything but coy. Boldness and strength cut through the speakers as I sit here engrossed, tapping my feet and melting into the deep vocals and mesmerising melodies of an enormously motivated young musician. His previous ARIA nominations, Australian National Busking Champion and Best Blues, Roots & World artist of the year 2013 awards are just stepping stones on the way to an incredibly bright future for up and coming folk-acoustic artist Guyy Lillyman.

Ian E Wheeler - 37 minutes ago
Thank you for your donation. It has helped me after I lost everything. Amount received *might* have paid for something like t... View
Trish Roberts - 40 minutes ago
This is appalling. They aren’t trying to game the system. They are simply 2 people in a family relationship who need a home... View
David Brown - 42 minutes ago
I guess they won’t be voting for the government next time around. View
Lifestyle 84

Robert Lang - 39 minutes ago
Kirsty Noad I work in the trauma operating theatre of Canberra Hospital. I have not seen any scooter injuries. I see major tr... View
Robert Lang - 41 minutes ago
I too gave a hearing disability. I stand to the left of all shared paths. No problem. View
Robert Lang - 42 minutes ago
Cheryl Thuillier yep, and let’s make car drivers wear helmets too. After all, car crashes are the number one cause of head... View
News 4

Anthony Stewart - 42 minutes ago
Really 104.7 is no surprise I turned off after a month of the ‘new’ breakfast DJ when they started View
Guy Noble - 2 hours ago
Tom Adam I dont think he and Bec have done anything to promote themselves lol View
Tom Adam - 2 hours ago
Happy to use this to negotiate a better radio advertising rate. View
News 4

Stas Idowu - 44 minutes ago
EL2s beware View
ChrisinTurner - 1 hour ago
I hope the panel addresses the problem of attracting technical specialists like engineers and certain IT people. The current... View
Matthew Davies - 3 hours ago
Funny how work level assessments always seem to favour the kinds of skills that are required to work in a Human Resources dep... View
Sport 1

Luke Costanzo - 59 minutes ago
Michael Pearson zero facts or fact checking. All conjecture and clickbate. Try again View
Julie Macklin - 1 hour ago
I had my first Astra Zeneca vaccination last Thursday. Initially all I had was a slightly sore arm, which soon faded. However... View
Luke Costanzo - 2 hours ago
Jeannou Zoides check mine out with the nice NHS logo. I had it 3 weeks ago and I am still alive. Problem with the anti vax co... View
Food & Wine 41