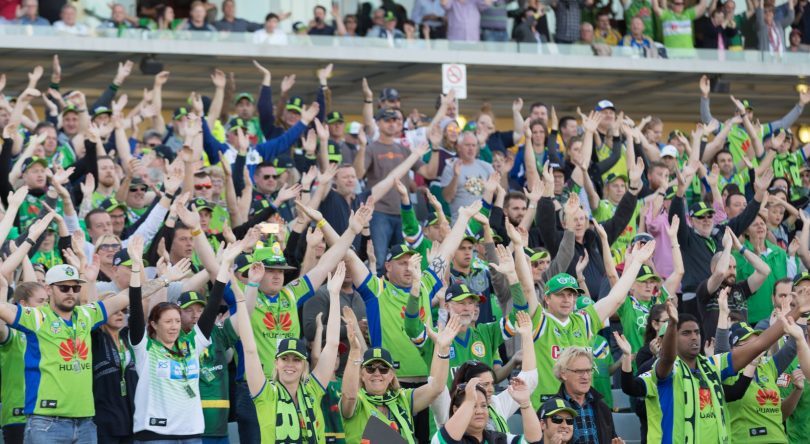 The communion of the stands: time to celebrate getting our lives back. Photo: File.

With full capacity crowd numbers and the prospect that we’ve got this COVID-19 thing beat.

We may have to take it one game at a time as the vaccine roll-out continues and the odd evacuation flight brings potential cases to our quarantine hotels, but the communion of the stands takes Canberra further towards functioning as a society again.

While the Brumbies have enjoyed a head start to the season, the return of the Raiders to Canberra Stadium this weekend completes the transition from a summer of inhibitions to fully restoring a city’s soul.

After a year of cancellations, truncated competitions, COVID-safe hubs and phantom crowds, footy and its tribal allegiances, exultation of the spirit and full-throated catharsis should be welcomed and embraced.

Even those who may not call themselves fans should appreciate the symbolism of the filled stands and a community being able to come together again.

In a one-team per code town like Canberra, our footy franchises go a long way to giving the place an identity and bringing us together.

Especially, when they are winning.

The Brumbies were champions last year, and are literally kicking big goals this year.

But it’s Ricky Stuart’s Raiders who have endeared themselves to Canberrans with recent gallant seasons, and the sight of Ricky riding every tackle, punt and try from the sideline as the clock counts down has become legend.

If the footy gods have any kind of heart they would put poor Ricky out of his misery and deliver a green premiership this season.

For fair-weather fans, autumn is their time, before winter sets in, loyalties are tested and the inevitable campaign resurfaces for an insulated, climate-controlled dome in the city.

It’s winter when Canberra Stadium becomes a frozen fortress to be feared by seaside softies from Sydney, Newcastle and Illawarra, or Queensland’s beautiful-one-day-perfect-the-next orchids that can only thrive in perfect conditions.

Can’t do much about Melbourne, though.

It’s winter when the true believers huddle together as the sleet scuds across the terraces, muttering something about there being no such thing as bad weather, just bad clothing.

How many premiership points is Canberra Stadium worth in the winter?

Quantify that, Andrew Barr, when the city stadium proposals cross your desk.

For the philosophically minded, footy reminds us that it’s the simple things that matter – loyalty, teamwork, courage – expressed in almost haiku form through the minimalist opining of commentators raised on the old-school, working-class game, or the slightly more elevated interventions from rugby callers steeped in more elitist circles.

For the players, the pared-back poetry of the postmatch knows no bounds. The Stoics can only respond to what is in their control, while others just do the job assigned to them. But a universal maxim is that whatever happens on the paddock, it’s all for the boys.

Forget Home and Away, footy is where real human drama is at, whether it be broken relationships, bones and laws. The season has hardly started and it hasn’t failed to disappoint, much to the dismay of administrators who mutter about role models and the product while expecting players to adopt the regimen of a monk.

Footy players have become well-practised in the art of the mea culpa, but please keep ours away from nightclubs and smartphones.

So after COVID’s wreckage, this is not a season to leave anything on the park, in the stands or the lounge room.

Life’s there to be lived. Just don’t lose the remote.