Offering light-hearted views and plenty of potential for growth, this thirty-something year old ‘unit’ is officially off the market.

When Rowland Fischer placed his ad on Allhomes.com.au, his description was carefully worded and aimed at just one special person. Described as being ‘well looked after for the past two years, but now in need of a long term and committed title holder’, the ‘unit’ was advertised as ‘for lease indefinitely’.

Mr Fischer’s plan came to fruition last Friday as the couple picked up the keys to their newly-purchased cottage in the village of Sutton, according to an article in the Canberra Times. On the way to their new home, Mr Fischer brought the ad to his girlfriend’s attention.

Unfortunately for Mr Fischer, Ms Port misread the ad and assumed someone was fraudulently offering their house for rent.

Thinking on his feet (or on one knee), Mr Fischer eventually popped the question out the front of their new home. The answer was yes. 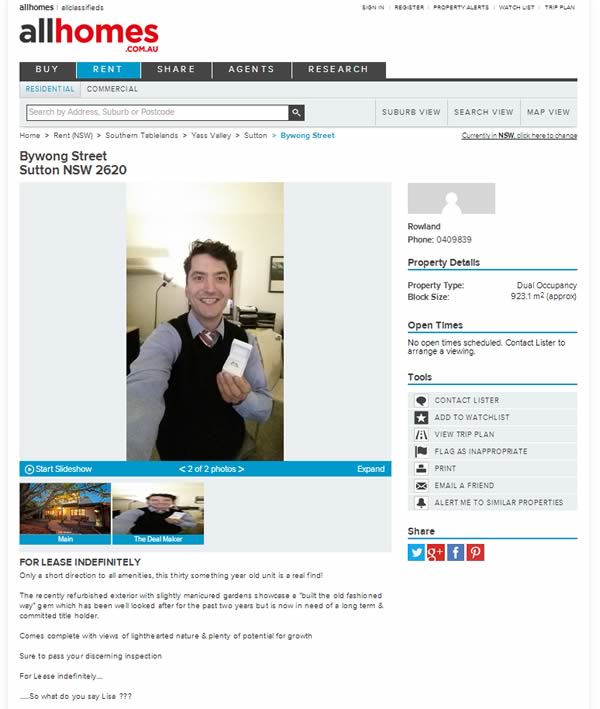 May Mac - 19 minutes ago
The link didn't work for me. I found a page on the ABS website and tried to post it but it doesn't open from here either. View
News 74

Damian Lomax - 47 minutes ago
Fiona Dickson just as a side note for you, the cars actually run on green fuels. Almost every car at Summernats that actually... View
Community 29

Kristy Morton - 1 hour ago
Bit of a catch 22 as people cant afford to just give there rental properties out for free as they too then can lose everythin... View
Amanda Evans - 14 hours ago
If only I had one, I would.... View
Steve N Carol Trute - 17 hours ago
Marko Lehikoinen agreed and into the CEOs pockets 😡 View
Food & Wine 21

Sean Nicholls - 3 hours ago
I have leave that day! I'm in. View
Lindsay Burrows - 4 hours ago
Lisa Couacaud fine. I’ll drink for both of you View
Lisa Couacaud - 6 hours ago
Kate Sullivan but practice makes perfect View
News 11

Trev Astle - 20 hours ago
The liberals love Royal commissions as they delay action and voters pay for them, not the LNP. Bit like their TV PR campaigns... View
Peter McDonald - 1 day ago
David Loft all the focus was on Morrison. View
News 42

Frank Trapani - 24 hours ago
Lou CF ...So, Why not just deactivate the desalination plants or increase it to a full capacity and build some more if necess... View
Lou CF - 1 day ago
Frank Trapani but the wet seasons have now not been normal for at least 3 years. They also are not getting as much rain View
News 25

@The_RiotACT @The_RiotACT
Legislation to make life easier for renters is having unintended consequences, including higher rents & a tighter rental market, according to property group #Independent https://t.co/PL9JbxHxKv (2 hours ago)