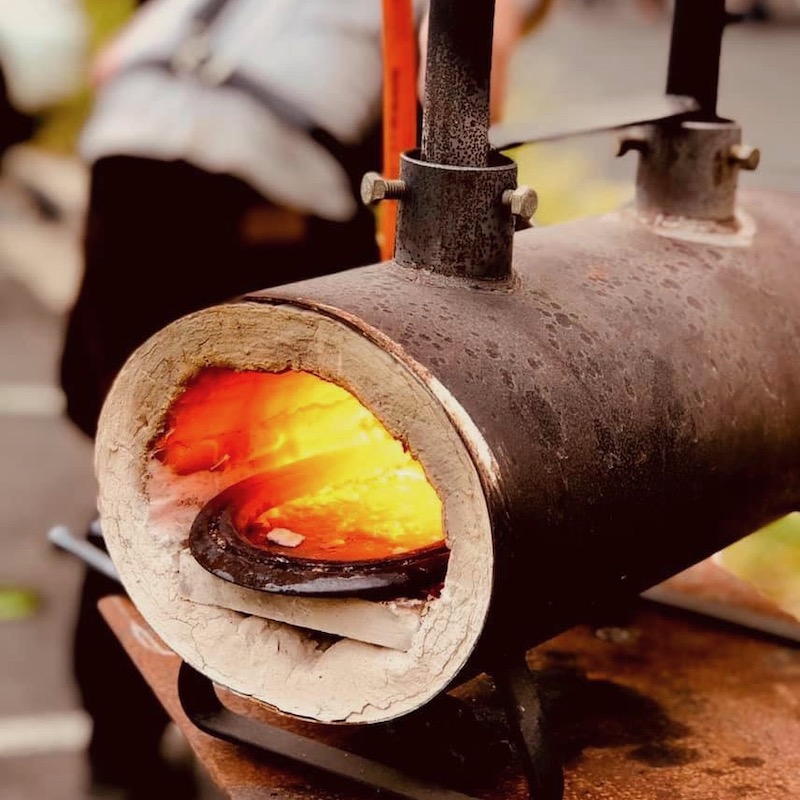 Blacksmithing is far from a spent force, as a handmade market is showing in Harden Murrumburrah. Photos: Supplied.

A blacksmithing workshop at Harden Murrumburrah is forging a following as people discover the satisfaction gained from learning an ancient art.

In old stables outside Murrumburrah’s 1880s court house, Will Kirkpatrick is running workshops that have drawn people from Canberra and elsewhere who are interested in creating objects from metal.

“By the looks of things, I am going to have to run one every other weekend I think. It is not just young fellas or old blokes enrolling, it is all in between. We’ve got older women, younger girls, everyone wants to try their hand at it,” Will says.

After striking a deal to teach his craft in Harden-Murrumburrah, Will cursed a wind storm for destroying his blacksmithing workshop at Koorawatha, where he lives, between Young and Cowra.

“It was only a three-bay carport but it was everything to me,” he says.

In the middle of a total fire ban, he was also unable to work outside for his sideline business making tools and gifts.

“I just had to sit on my hands and ring everybody that had orders and say, ‘Look, I’m sorry, I cannot fill them’,” he says. But his first workshop went ahead after Will hoisted a portable gas-fired forge, century-old anvil, and tools into his vehicle and drove to the Handmade in Harden Murrumburrah Community Market. There he swung into action and gave a demonstration on how to make a knife.

He has made his own tools in this fashion and quotes the old blacksmith’s saying: “You need a tool, you make a tool.”

He also made little leaf key rings and in no time an eager crowd of onlookers was milling around him, and bookings began rolling in for future workshops.

Will is grateful his boss on a cattle and wheat farm near Cowra allows him to ply his blacksmithing trade.

“If I need a weekend off to do something, like last weekend, on the Saturday I worked on the farm and Sunday I had off to do the markets,” he says.

An interest in history guided Will into blacksmithing two years ago. After reading what he could find, he attended lessons by Dave Walker, the legendary village blacksmith at Cargo.

“I like working with my hands. I don’t like seeing things being thrown away if it can be avoided. Nowadays when we buy tools, we assume they will get through a job and be disposable. Everything seems to have built-in obsolescence.”

He says old tools have become collectors’ items and still do the job they were created to do 100 years ago.

“Everything I make has the same forethought as they did back in the day,” says Will, who is also doing a certificate II in welding.

“It definitely instils pride in your work, to do it properly the first time.”

Will’s workshops are held at the Handmade in Harden Murrumburrah Community Market.

Treena Loiterton - 13 minutes ago
Geoff Richardson what about dumping every single record about war/defence on the steps of the memorial and getting them to ke... View
Richard Grainger - 4 hours ago
That building is simply storage. The cost that the Archives desperately need funding for is to digitise the records. A lot of... View
News 64

Ray Ez - 43 minutes ago
Tiger Fit so no memorials for anyone?? Did you think that maybe this sort of thing helps a lot of veterans? View
Ray Ez - 45 minutes ago
Ian Pearson you do understand the consultation was not a vote? They asked for people’s opinions. They are under no obligati... View
Ian Pearson - 60 minutes ago
Concur - while Stalin might have said that numbers have a quality of their own, presumably the NCA did not agree. View
Business 1