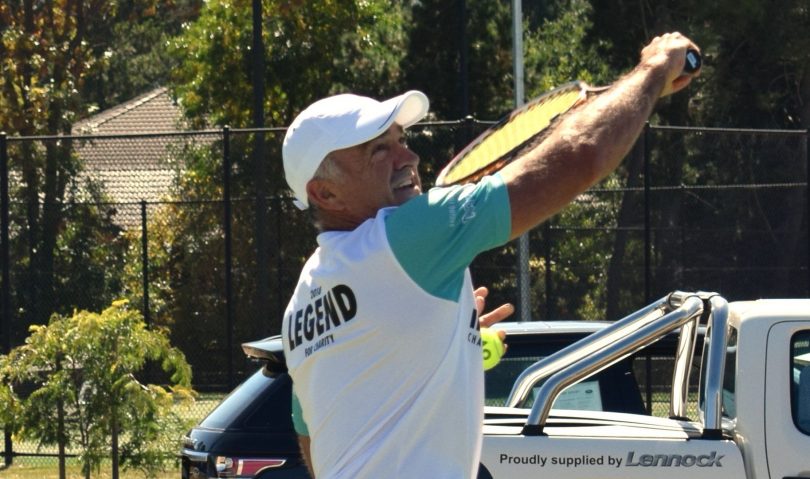 Wally Masur was back in Canberra last week to raise awareness for Menslink at the P2 Invitational. Photo: Supplied by Tennis ACT.

Former Davis Cup captain and Canberra local Wally Masur believes his fellow Canberran Nick Kyrgios has the talent and potential to be the one.

The former world number 15 was in Canberra last week to raise awareness for Menslink at the P2 Invitational and said he backs Kyrgios to have a big year.

“He is a phenomenal talent and if you talk about the next gen of players coming through, he and Alexander Zverev are in that crop of players. From a talent perspective and a potential perspective, for me, he is the one.”

Masur said that unlike Roger Federer and Rafael Nadal who were born into greatness, Kyrgios will have to work hard to maximise his potential.

“There is a lot to tennis. There is the lifestyle, travel, training, it’s pretty monotonous and there is a real process behind it and you have got to get a lot of things right to absolutely maximise your potential.”

“Murray and Djokovic weren’t born into greatness they had to work their way to it. It seems like Rafa and Roger were, for whatever reason. But if you look at how great Murray and Djokovic were, it took them a while to settle into their games, to be comfortable in their own skin and to maximise their potential and become grand slam winners.”

“I think Nick is on a journey and we saw some incredibly positive signs over the Australian summer. He is a top 10 player every day of the week.”

Kyrgios is set to return from a month layoff from an elbow injury which he suffered in a loss to Zverev in the Davis Cup in Brisbane back in February. The niggling injury has kept him off the circuit for the last month but the world number 20 will make his return at BNP Paribas Open in Indian Wells. He will be joined by fellow Aussies Alex de Minaur and Matt Ebden in the main draw of the ATP Masters event.

Do you agree with Wally Masur that Kyrgios has the talent and potential to be the one? Give us your opinion in the comments section below.

Clare Hyden - 56 minutes ago
Mark Rogers ummm 20,000 through the gate each day. View
James Kelly - 7 hours ago
Health minister impressed… bro I got covid there View
Mark Rogers - 7 hours ago
The event organisers clearly stated it was not limited to 20,000 a day. It was 80,000 overall. So some percentage of that was... View
Opinion 375

Chris May - 4 hours ago
I grew up in Port Pirie in SA Their moto cross track was out of town, about 3kms, in a old quarry. Some bright spark opened a... View
Viviean Laycock - 6 hours ago
I don't think I understand. The track was running vintage cars, which no one seemed to have a problem with, so why is it unwo... View
Viviean Laycock - 7 hours ago
Beth Stevenson I thought the drag strip went broke and defence wanted the land back. I heard nothing about noise complaints. View
Lifestyle 3