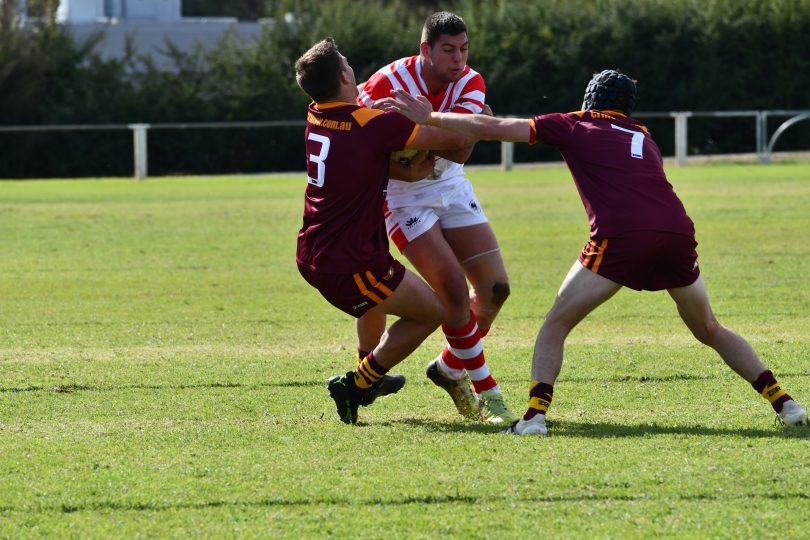 Cleveland McGhie (red and white) is putting friendship on the line during the Country Championship semi-final. Photo: Supplied by Canberra Region Rugby League.

Cleveland McGhie is ready to put his all on the line to help Monaro’s under 23’s side win their Country Championship semi-final, even if it means ending his best mate’s chances in the process.

The former Canberra Raiders under 20’s player is preparing to run up against one of his best mates Nathan Leatigaga, who will start at lock for the Illawarra South Coast Dragons.

Born and bred in Illawarra, McGhie has lots of friends and a couple of junior grudges back home and the Wollongong native was looking forward to revisiting them when the sides clash today (19 May).

“I know a couple of players I’ll line up against and one of my best mates will be playing for them, Nathan, who will probably start at lock,” McGhie said.

“There are a couple of players from that competition that are playing that were junior grudges and rivals, so it will be good to re-visit them.

“I will definitely cross paths with Nathan, if not during the game, definitely after the game.”

McGhie said Monaro’s 28-10 win over Riverina Bulls last weekend wasn’t the side’s best performance and the team will need to improve to have any chance against Illawarra.

“In the opening 20 minutes, despite them scoring the first try, we were really dominant but then we started to have individual errors and individual accountability slipped away,” McGhie said.

“But at that back end of that second half, we came over the top.

“I think if we give those opportunities to Illawarra, it will probably be a different result.”

The second-rower is never content to rest on his laurels and insisted there is still plenty to work on in his game.

“I am the same as my team, there are always areas I can improve,” he said.

“I gave away a penalty and they scored off the back of it and missing a job in defence on the line. There is still room for me to improve and areas for me to grow.”

McGhie’s side knocked out the Dragon’s in last year’s semi-final and is expecting them to come out firing in today’s clash.

“Both squads have had numerous changes in the sides that lined up last year but both are still strong sides that will compete to win the Championship,” he said.

“Both teams will turn up ready to play and I think the team that wants it more and can hold the footy for the better portions of the game is going to win.”

The winner of the semi-final clash will face either the Northern Rivers or the North Coast in the final.

Capital Retro - 33 minutes ago
"The cost of retrofitting was estimated to be about 17 per cent of the estimated capital cost." Gee, I didn't think rubber ba... View
News 243

Yinan Zhang - 46 minutes ago
Thank you for referring to the appropriate information source Rosie, I like the way you have approached this delimma. Yes and... View
News 26

chewy14 - 53 minutes ago
JC, No spin here, just facts. Whatwik claims that others have had to backtrack on their plans. Except none of the other state... View
Lifestyle 35

Ali McNally - 56 minutes ago
Nadine Pickersgill next year! View
Lyn Scougall - 10 hours ago
Margo Bellis it’s just the most beautiful garden. I think you told us about it and we went there 👍 View
Opinion 50

Futureproof - 1 hour ago
Why exactly, does the ACT, population smaller than the average LGA in Sydney, need this position? I can only guess that she w... View
Community 5