Four world-class musicians: The Grigoryan Brothers and the Beijing Guitar Duo unite for an evening of guitar virtuosity 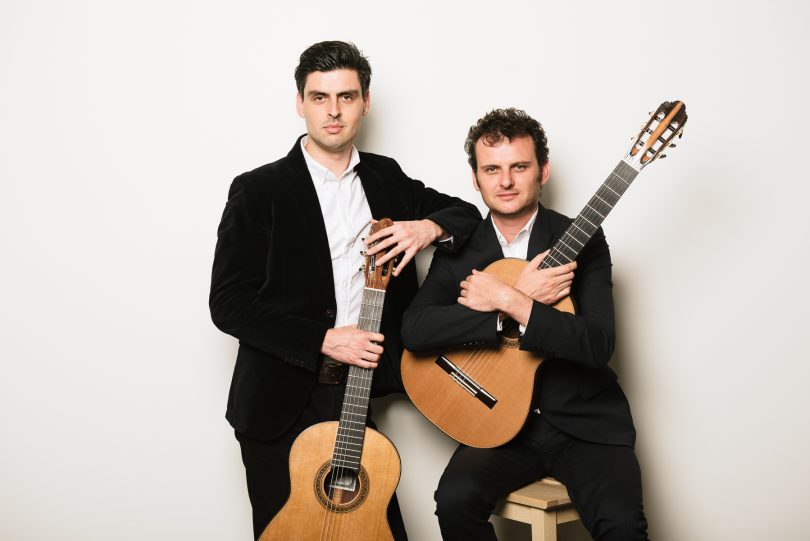 Growing up, my childhood home was fairly unmusical. There were no piano lessons, or screeching violin practices in our household. Between my sister and I, there probably wasn’t even a triangle or xylophone to be found and we may have both even failed the high school music component of learning nursery rhymes on the recorder.

In stark contrast, visits to my parents’ friends the Grigoryan’s were full of music. Their two sons – who we knew growing up as ‘Slav’ and ‘Len’ – would spend hours practicing on their instrument of choice, the guitar. Whether we were visiting their home, they were visiting ours or we were on a combined family beach vacation, live music and impromptu performances were always guaranteed.

As we all grew and family vacations and visits became less frequent, I started to get an inkling of their immense talent. I would regularly hear their names both as individuals and as a duo on T.V and radio, see their CDs for sale in stores and their names billboarding concerts.

Slava and Leonard Grigoryan are now undoubtedly Australia’s finest guitar duo; 4 time ARIA award winners, The Grigoryan Brothers are well known to audiences worldwide. Ahead of their upcoming performance at the Canberra Theatre Centre with another dynamic pair, the Beijing Guitar Duo, Leonard revealed what it was like growing up in his musical family, his relationship with his brother and details of the tour. 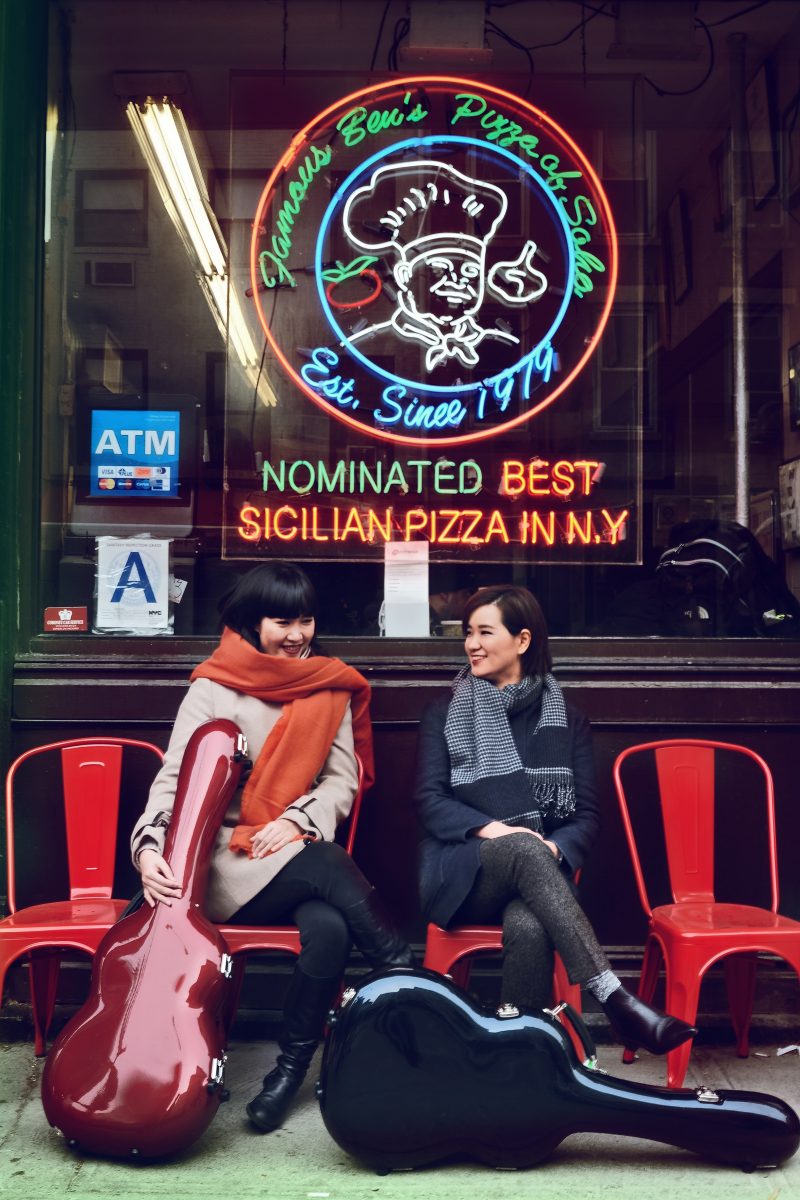 What was it like to grow up in the Grigoryan household surrounded by music?

Music was always a big part of my childhood. Both mum and dad are musicians so help was at hand 24 hours a day. The thing that was most valuable was that music was always being played around the house, not only classical music but also jazz, blues, rock and basically anything that my parents thought was good music.

At what age did you and Slava start playing the guitar?

What is it like performing and touring with Slava?

The nine-year age gap between the two of us is actually why we think we get along so well. We were never in direct competition growing up so there was never a feeling of trying to be better than each other. The goal for me from an early age was to try and reach a high level in order to one day be able to pay with Slav. In the late nineties Slav moved to London for about four years and in that time was when I developed as a musician so as soon as he returned home we started playing and touring together.

How did the collaboration with the Beijing Guitar Duo come about?

We first collaborated with them in China as part of a South Australian delegation visit to its sister province, Shandong. The week included a number of cross-cultural collaborations between the two states. Although they are known as the Beijing Guitar Duo (because of where they studied and met), they are originally from Qingdao where we played one of our concerts together.

Meng Su and Yameng Wang are both incredibly gifted guitarists and the way they play together is incredibly inspiring for both Slav and myself. Working with them during our tour of China was musically incredibly rewarding. I’m looking forward to recapturing some of that energy on our Australian tour.

For an astounding evening of guitar virtuosity, the Grigoryan Brothers and Beijing Guitar Duo will be performing one night in The Playhouse at Canberra Theatre Centre on August the 20th. For bookings, visit the website or call the Box Office on (02) 6275 2700.

Jason Ezra - 12 minutes ago
A move to prevent an alternative emerging in light of the election result. And some think they care what the electorate actua... View
Liz Hughes - 2 hours ago
The “controlling right faction” at their best... View
michael quirk - 2 hours ago
If the motivation is to maintain the dominance of the right faction, then it is sowing the seeds for endless defeat of the pa... View
News 8

Mike Bailey - 23 minutes ago
These things breed faster than rabbits, last week there was one on the footpath outside of work. Yesterday there was eight! View
Avril Pounds - 1 hour ago
I saw a scooter rider last week sitting on a milk crate he'd put on the scooter. View
Shaun Coash - 2 hours ago
Michelle, I think they should just lock them all up. Lol View
ACT Election 14

Peter Bee - 26 minutes ago
Simon Robbie . Being a bit smart but the Libs could do with moving back to the centre. The ‘right’ in Canberra does not r... View
Jo Hann - 53 minutes ago
Jorge not really. Even if the Liberal party had won 10 seats and Labor 9, The Greens would never form government with the Lib... View
Peter McDonald - 54 minutes ago
Simon Robbie well they’d have four seats instead of three with Labor View
News 16

Sue Davies - 43 minutes ago
Good luck on your new adventure to you and your family View
Rosemary Rummery - 2 hours ago
Awesome news Canberra is so lucky to have Dr Nick make this his home . Such a nice sole and here’s hoping that his kindness... View
Natalie Gresham - 3 hours ago
Good luck with that 🤬 View
News 5

Guy Hosking - 45 minutes ago
The Eugowra line provided the setting for the final shootout in the episode of Inspector Morse set in Australia. Closed short... View
News 26

ssek - 2 hours ago
Yes, a couple on the pension CAN own a home and have up to 876k in assets. How many do you realistically believe to be in tha... View
ACT Election 38

Kytie Mclign - 3 hours ago
Margaret Freemantle Maybe, but she was one of the Liberal Party's few Chief Ministers. View
Food & Wine 3

bev hutchinson - 4 hours ago
Canberra aged care facility in Lyneham is fantastic. Registered nurses on duty all the time. The clinical manager is great. T... View
show more show less
*Results are based on activity within last 7 days

Armed with his guitar, Bill Olson set to soothe the crowd at Sunday Sessions

@The_RiotACT @The_RiotACT
As UC celebrates 30 years, Wil Anderson will be among the alumni and staff asking the question: Is our future bright? https://t.co/ux9xGZNJzC (49 minutes ago)

@The_RiotACT @The_RiotACT
E-scooters are much like any other vehicle, says ACT Policing, and there will be consequences if riders flout the rules https://t.co/pWQYMZledh (2 hours ago)

@The_RiotACT @The_RiotACT
Labor's Gordon Ramsay has lost in Ginninderra, and the Greens' Johnathan Davis has won in Brindabella, giving Labor 10 seats, the Liberals nine and the Greens six in the new Assembly https://t.co/LIGYqef8jm (4 hours ago)