14 May 2021 | Michael Weaver
Start the conversation 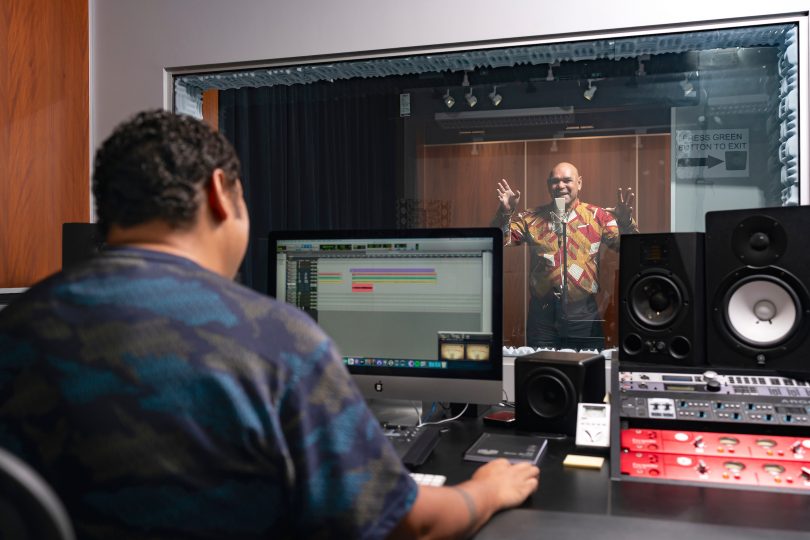 The Australian National University (ANU) has established a recording studio dedicated to keeping the soul of Indigenous music alive.

Mr Kepa said the studio is as much a place for belonging for Indigenous musicians as it is to foster a better understanding of the culture of First Nations people.

“This new Yil Lull recording studio here at the School of Music is a place for us, our mob, to come and meet; to create and to share; to expand on our stories; to keep our culture alive and our music alive; and to just keep that fire burning,” he said.

“It’s also a place to come to feel like we belong here. This space is not just my space, it’s a space for all of us to be here together.”

The studio is named after Yil Lull, a song written and performed by Uncle Joe Geia that originally appeared on his 1988 album of the same name.

Uncle Geia said he sees a great opportunity for First Nations people to come to the studio and bring their songs to a new audience.

“We had to tell our stories and keep our important things in either song and dance or painting. A traditional painting has a dance and it has a song to go with it. These are all communicating skills we use to share stories with others in our mob, regardless of their dialect.”

The head of ANU’s School of Music, Associate Professor Kim Cunio, said the idea of establishing Yil Lull studio came about from a submission he and Dr Sainsbury made for the vice-chancellor’s Grand Challenges Scheme on Indigenous Health in 2019.

“Our School of Music wants to be of service to Indigenous musicians,” he said.

“Initially, it was to be a mobile recording studio. This will now be the second stage of this project and something we will do in 2022.

“We had a space that wasn’t being used so we decided to transform it into a space that would inspire Indigenous musicians to tell their stories through song.”

Associate Professor Cunio and Dr Sainsbury talked to First Nations musicians and realised the school needed to make a space that was Indigenous-led and would be free for Indigenous musicians to use.

Associate Professor Cunio said Will Kepa is one of the best people to lead the new studio.

“Will is hugely respected by Indigenous communities,” he said. “Lots of musicians are already interested and we did our first recording with Uncle Joe Geia, a Queensland master storyteller and musician who has gifted the name from his Yil Lull song.”

Associate Professor Cunio said local Indigenous musicians will also use the studio, with the growing cohort of Indigenous staff and students at the ANU School of Music leading the way.