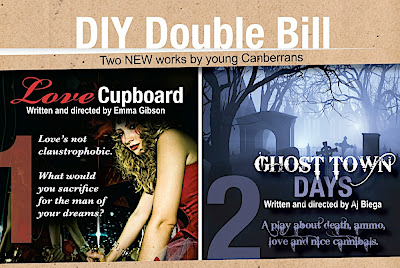 The Belconnen Theatre is playing host to a Youth Week presentation of a theatrical double bill with plays by local authors.

Featuring a cast of young theatre makers, the two one-act plays have been devised and developed specifically for Youth Week.

Written and directed by Emma Gibson, Love Cupboard is a deceptively light and quirky play, centred on teenage runaway Annabel who has been hiding in her boyfriend’s cupboard for a year and a half, while her parents and friends fear she is dead. A black comedy about romance, fantasy and philosophy, Love Cupboard asks the question: ‘Just how far would you go for love?’

To another type of love story, Ghost Town Days, written and directed by Aj Biega, is an Absurdist play about death, ammo, love and nice cannibals. Phil has put a lot of sweat, tears and (other people’s) blood into his career as a hitman. But when he ends up shot in a desert ghost town, he must confront his inner psyche and the troubles of small business.

‘This double bill has been a great opportunity to get young people involved in creating exciting new theatre,’ said Simone Penkethman, Arts and Cultural Development Officer at Belconnen Community Service. ‘While the plays have both been written with young people in mind, they’ll be of interest to a wide-reaching audience.’

Bec Kelly - 11 hours ago
I think the issue is that the Canberra Times wrote the article - they are after a head line and people to pay for their subsc... View
Annie Mills - 22 hours ago
Exactly, lessons learned after these events are supposed to better prepare for the next time but it seems that there is an in... View
Business 9

The ACT Government has called on Opposition police and emergency services spokesperson Guilia Jones to quit the portfolio after it...
Property 33