Freewheeling captures the freedom of cycling 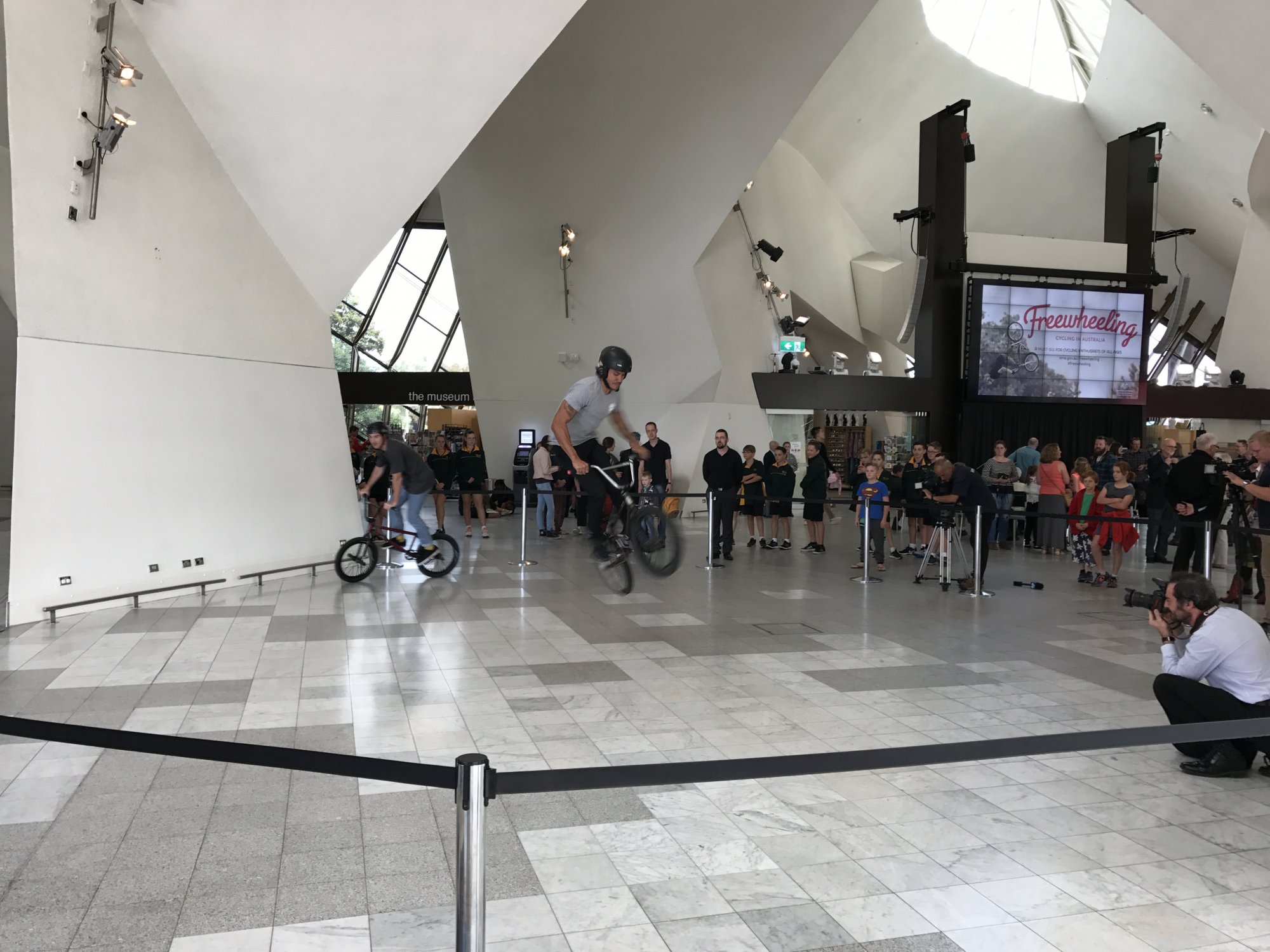 The Freewheeling exhibition at the National Museum of Australia opened to the public last Thursday morning and is a must-see for anyone with any interest in the bicycle in Australia.

Michael Milton noted how many passionate cyclists there are in Canberra, and was happy to see many of them at the opening of Freewheeling.

“Bikes remind us of that feeling of freedom that we experienced as a child,” said Michael.

“I remember riding my bike on my first trip across town, from Woden to Belconnen. As I went out on my own, I felt the feeling of adventure. The spirit of being out on my own, not sure where I was – of course there were no mobile phones in those days.”

“That feeling of adventure is still high on the list for many people throughout their adult lives,” he said.

Freewheeling covers the entire history of bicycles in Australia, from the first bicycles in the 1860s to the form cycling takes in the current day, focusing on how we use it as a form of transport. Mathew Trinca noted that cycling is now a popular way to get around our cities.

“Cycling has really shaped a good deal of Australian life over 140 years,” he said.

“We’ve ridden bicycles to school and work, to visit friends. We’ve pedaled them across the continent. We’ve raced them around the world.”

Gillian Helyar noted how happy she was to be invited to speak on behalf of the not-so-professional bike riders in Australia.

“That’s the particular magic of this exhibition; that most people will relate to at least some of it because most people have independently ridden a bicycle at some time in their life and remember the joy of it,” said Gillian.

Freewheeling explores 140 years of Australia’s cycling history and how bicycles have brought millions of people excitement, freedom and even glory.

Freewheeling will be at the National Museum of Australia until 9 July 2017, and can be viewed 9am – 5pm. Entry is free, donations welcome.

I saw the story on ABC News and I want to see Cadel Evans’s bike. I couldn’t believe it when they showed it, it looks like my bike.

Thanks for the yarn and alert about this free exhibition Anne. Must see it soon. Have always thought Canberra was cycling heaven and this is another good reminder about how safe and enjoyable it can be. I need to do more cycling so hopefully, this will inspire that as well.

Someonesmother - 20 hours ago
Gee why does this not surprise me? Look who the developers are. 43 car parks in a completely congested street, using Canberra... View
News 17

@The_RiotACT @The_RiotACT
If you're an emerging theatre maker, where do you go for experience? Three local creatives say the Canberra Youth Theatre artists' residency has been invaluable for them https://t.co/wBFdnL4Ls5 (18 minutes ago)