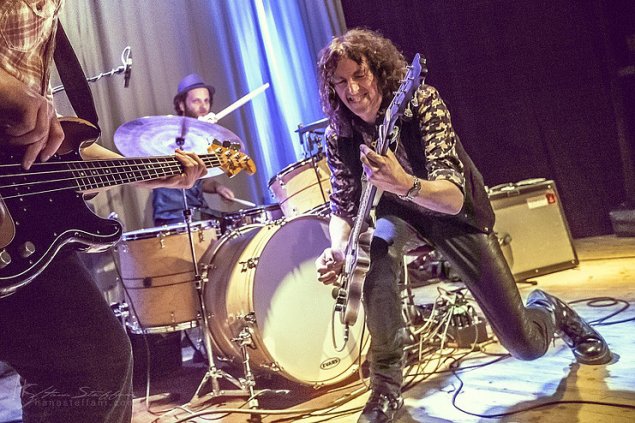 Multi-instrumentalist Gwyn Ashton is an eclectic live performer blending roots, blues, alternative and ethnic music, fusing them together with alternate-tuned electro-acoustic instruments such as Weissenborn lap slide, National resonators, 12-string and electric guitars with a kick drum, blues harp along with loopers and fuzz boxes to complete his sonic palette.  He is a master of the slide guitar and has an armoury of instruments at his fingertips to create a unique, huge-sounding one-man live show.

Ashton grew up playing the Australian circuit and relocated to the UK in 1996.  He has opened for top-billing artists – Van Morrison, Status Quo, Johnny Winter, Canned Heat, Robin Trower and a multitude of other fine musicians.  He has released six albums and one EP, came third place behind Jeff Beck and Gary Moore in a French guitar magazine poll, had two albums simultaneously in the Amazon Top 100.  He now records, tours and plays festivals all over the world from his Euro base.

Amanda Evans - 3 hours ago
If only I had one, I would.... View
Steve N Carol Trute - 6 hours ago
Marko Lehikoinen agreed and into the CEOs pockets 😡 View
Marko Lehikoinen - 6 hours ago
This is why I haven't given anything to these "charities", I know most of the money will go into investments for 12 months, t... View
Food & Wine 18

Kate Sullivan - 3 hours ago
Lisa Couacaud it does! But I’m a lousy day drinker! View
Fiona Whitesen - 6 hours ago
Simon - he who is not on Facebook will be happy. 😆 View
Simon Fenton - 7 hours ago
Fiona Whitesen 👍 Elmwood posse outing 😂😂😂 View
Community 6

Trev Astle - 9 hours ago
The liberals love Royal commissions as they delay action and voters pay for them, not the LNP. Bit like their TV PR campaigns... View
Peter McDonald - 16 hours ago
David Loft all the focus was on Morrison. View
David Loft - 1 day ago
Six weeks on the fire ground and this is the first I’ve heard or seen him on social media. Bit like some of the trees on th... View
News 42

Frank Trapani - 13 hours ago
Lou CF ...So, Why not just deactivate the desalination plants or increase it to a full capacity and build some more if necess... View
Lou CF - 13 hours ago
Frank Trapani but the wet seasons have now not been normal for at least 3 years. They also are not getting as much rain View
News 10

Philip Selmes - 17 hours ago
Peter Gersbach yes, he's not French, is he? 😂... View
Carol Jordan - 1 day ago
Robyn Holder this is to lead the recovery process not deal with the emergency. View
News 25

Greg Miller - 20 hours ago
Carl Ostermann just because one person's situation is worse than another's, doesn't mean the second person has no problems. N... View
News 2

@The_RiotACT @The_RiotACT
Here's the latest RiotACT newsletter, which recaps all the news & top stories of the week https://t.co/3vsPCAtu3F (5 hours ago)

@The_RiotACT @The_RiotACT
Maintenance work will disrupt evening light rail services between Dickson and Gungahlin later this month and commuters will need to transfer to buses. Ian Bushnell has the details https://t.co/4fJzI7zvZi (7 hours ago)

@The_RiotACT @The_RiotACT
With injured horses & destroyed huts, how did #Kosciuszko fare in the fires? https://t.co/0CIzhMMP99 (9 hours ago)