Lisa Richards, Folk Nouveau chanteuse writing songs that explore the inner and outer world through a melting pot mix of sounds that include folk, jazz, country and blues. She recently moved home to Australia after a very extended stint in the USA. Appearances in the USA include Telluride Bluegrass Festival, Rocky Mountain Folks Festival, Kerrville Food and Wine Festival, Kerrville Folk Festival, Merlefest, SXSW, College Music Festival (CMJ). Her songs have appeared on CD’s alongside Adele, Nina Simone and Corinne Bailey Rae as well as being heard in film and television. She has shared the stage with a number of artists including Michelle Shocked, Paul Kelly, Chris Whitley and Toni Childs.

‘Breathtakingly beautiful, the album is a joy to listen to, and Richards a pleasure to journey with.’ Hannah Teape Davis tone-deaf.com.au 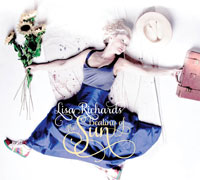 Ian E Wheeler - 51 minutes ago
Thank you for your donation. It has helped me after I lost everything. Amount received *might* have paid for something like t... View
Trish Roberts - 54 minutes ago
This is appalling. They aren’t trying to game the system. They are simply 2 people in a family relationship who need a home... View
David Brown - 56 minutes ago
I guess they won’t be voting for the government next time around. View
Lifestyle 84

Robert Lang - 53 minutes ago
Kirsty Noad I work in the trauma operating theatre of Canberra Hospital. I have not seen any scooter injuries. I see major tr... View
Robert Lang - 55 minutes ago
I too gave a hearing disability. I stand to the left of all shared paths. No problem. View
Robert Lang - 56 minutes ago
Cheryl Thuillier yep, and let’s make car drivers wear helmets too. After all, car crashes are the number one cause of head... View
News 4

Anthony Stewart - 56 minutes ago
Really 104.7 is no surprise I turned off after a month of the ‘new’ breakfast DJ when they started View
Guy Noble - 2 hours ago
Tom Adam I dont think he and Bec have done anything to promote themselves lol View
Tom Adam - 2 hours ago
Happy to use this to negotiate a better radio advertising rate. View
News 4

Stas Idowu - 58 minutes ago
EL2s beware View
ChrisinTurner - 1 hour ago
I hope the panel addresses the problem of attracting technical specialists like engineers and certain IT people. The current... View
Matthew Davies - 3 hours ago
Funny how work level assessments always seem to favour the kinds of skills that are required to work in a Human Resources dep... View
Sport 1