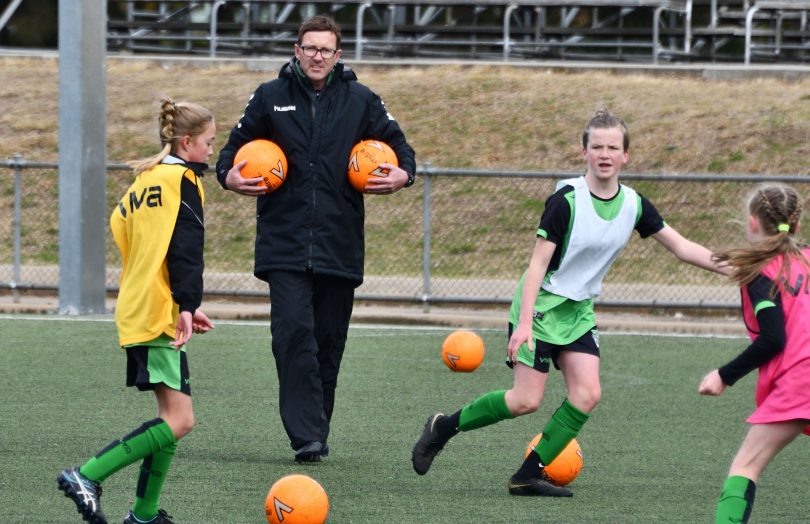 Belconnen United have quietly secured their new secret weapon to help the club rise back to the top of the NPL tree, signing the UEFA qualified coach David Field.

Field, who has worked for English football giants Tottenham Hotspur and Arsenal, will start his new role as Blue Devils’ technical director in the upcoming season, tasked with guiding the club’s male program back to its glory days.

Belconnen United has become the benchmark for youth development in the nation’s capital, with their boys u13s, u15s, u18s and u20s making finals last season. Aiming to mirror United’s WNPL success, which saw the side that dominated the competition have 15 players in the 20-odd squad internally bred through the club’s pathways.

Field has overseas experience when it comes to youth programs and an eye for talent, after working in the EPL giant Tottenham Hotspur’s development program.

After undertaking football coaching courses while he studied PE teaching at the University of Newcastle, the Central Coast native headed to the UK with the desire to continue his coaching qualifications.

“The plan was to go to England for three years so I rocked up with just a backpack,” he shared with Region Media. “While I was there, I completed my UEFA A licence, which qualifies me to be a head coach of youth teams up to age 18, reserve teams for top-flight clubs, and men’s professional second-tier clubs.”

He went on to work for the Spurs development centre to earmark the future stars for the club’s academy before getting a job working for Arsenal women’s program from 2007 to 2012, winning two FA Cups and five league titles.

Due to family commitments and the desire to raise his kids in his home country, he came back to Australia after seven years away from home.

“I went over there with just a backpack but ended coming back to Australia with a wife and a son,” he said with a laugh.”For my football coaching, it would have been better off staying over but I wanted to raise my family back home.”

After his return to Australian shores, he became the Director of Football with Southern NSW Football before coaching Canberra United Academy u15s last season. Coaching girls as young as 12 in a grade two years above them, he led the girls to the u15s semifinals before losing to eventual champions Belconnen United.

His season with CUA was purely based on development, which is what his whole coaching philosophy is about.

“The key for me is to build a common playing style for the club,” Field shared. “The aim is for these kids to be eventually NPL players for the club and eventually become professional footballers and let’s hope we get an A-league team soon.

“Development is a really big focus for me and it doesn’t mean that I don’t like winning. I still want to instil in players that is important to try your best and be resilient and to never quit.

“My role is to make sure we are all singing from the same song sheet and we are delivering the same model and same playing style for the club.”