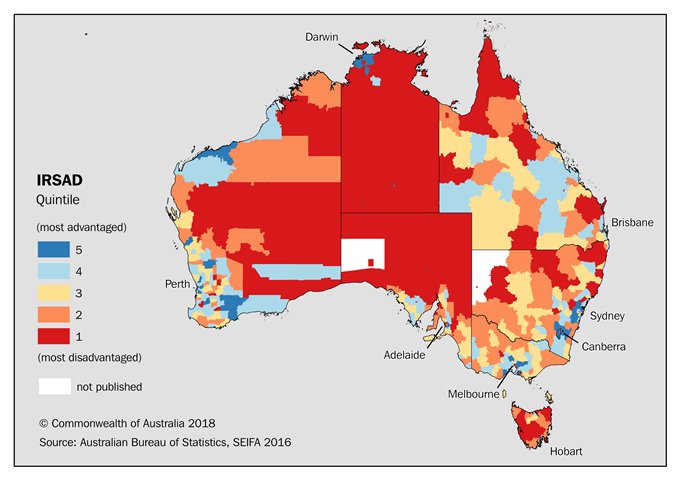 Handed the opportunity to write a story about Canberra’s ‘advantaged’ and ‘disadvantaged’ areas, based on recently released 2016 Census data from the Australian Bureau of Statistics, I grabbed at the opportunity, with great relish.

Eager to write a story about the massive disadvantage that is faced by swathes of Canberrans, cowering, starving in their ghettos, suffering outrageous discrimination and exploitation – I took a closer look at the statistics.

First things first, I thought, let’s have a look at the data. Probably should read the explanation of what an ABS ‘data cube’ is and what they contain …

Clear as mud. Getting that out of the way, I thought it best to get my head around SEIFA (Social Economic Indexes for Areas) and what each of the indexes relate to.

You will be fascinated to know that the four indexes of SEIFA ‘capture a slightly different concept of social-economic advantage and disadvantage’.

These are, according to the ABS:

Well, that certainly clarifies – absolutely nothing! But if you are fascinated by this stuff you can read all about it in greater detail in the ABS Technical Paper Socio-Economic Indexes for Areas (SEIFA) 2016 2033.0.55.001.

In fact, we only have four suburbs that are in the bottom 50 percent of disadvantaged suburbs – and an incredible one suburb, Symonston, is in the bottom 10 per cent. (Ahhhh hang on a minute, isn’t that where three caravan parks reside? Gotta love planning in Canberra.)

As for the rest of the ‘results’ (these amazingly complex statistics that only a total geek can comprehend) – behold, the top 10 advantaged suburbs in Canberra:

And, in reverse, the 10 most disadvantaged suburbs in Canberra are:

Some of these results may raise a few eyebrows in Canberra, especially those living in the leafy suburbs of Red Hill, Yarralumla and Reid that didn’t make the top 10 most advantaged suburbs in Canberra.
I suppose, my major comment on these statistics is they seem to be stating the ‘absolute bloody obvious’. A quick look at house prices by suburb would give you a pretty similar result.
My final point is that, relative to the rest of Australia, Canberra is in the top 20 per cent of the nation when it comes to advantage with 85 per cent of suburbs in the top 20 per cent of advantaged suburbs in Australia (take a look at the map of Australia at the top of this story).

Do you agree with the statistics released recently ranking Canberra’s most advantaged and disadvantaged suburbs?

I have been to see friends at Crace a couple of times. Next time I will take a compass and a cut lunch because it is an expedition in and out; sort of like timing the tide.

And the “fun” doesn’t stop because when you finally penetrate those one lane streets you have to find somewhere to park. The backyard (that means the room size space without roof or walls at the rear of the house) barbecue is enjoyed with the close company of house occupants each side and over the back fence. Great community, every one knows each other and even the eaves on the houses are close to each other.

So, how is this “advantage” thing decided?

The suburbs in the top 10 have little or no public housing. Yarralumla, Red Hill and Reid all have historically had quite a bit which would balance out the higher end.

The table is inaccurate, all Victoria should be dark blue, rest should be red

JS9 - 16 minutes ago
Amen to that BJ - not just for those wanting to downsize, but those people that may actually want to have families and stay i... View
JS9 - 2 hours ago
Not saying it isn't true Nick, but is there any reasonable, valid research that has been done around housing preferences any... View
bj_ACT - 3 hours ago
How about Canberra developers start building apartments that are big enough and of a high enough quality to encourage mature... View
Opinion 32

Elroy Jones - 2 hours ago
Kate Tricks it is exactly what we need. Why do you think houses are so bloody expensive here?? Because there aren’t enough! View
JC - 2 hours ago
Attractiveness is in the eye of the beholder. I often wonder how an ugly mug like me found a good gorgeous wife, turns out th... View
54-11 - 5 hours ago
I've been to 2nd and 3rd world countries where people are living cheek by jowl, and they can design some very attractive buil... View
Opinion 22

JC - 2 hours ago
Fair enough Mark, but do it in a way that doesn’t use people for political purpose and in a way that does not to missrepres... View
Lea Powell - 3 hours ago
Parton does need to do his homework. He has been elected as a high profile persona. He is used to, in his former position ask... View
whatwik - 4 hours ago
While we're at it I'd like to see cost benefit analyses of having on site residential managers at the larger public housing c... View
News 70

American actor Matt Damon was happy to pose with star-struck locals while visiting the regional village of Jugiong in the...
*Results are based on activity within last 7 days

@The_RiotACT @The_RiotACT
As Canberra's demand for housing continues to grow, are there too many new apartments on the horizon? One expert says no https://t.co/wOvLEBTlHx (24 minutes ago)