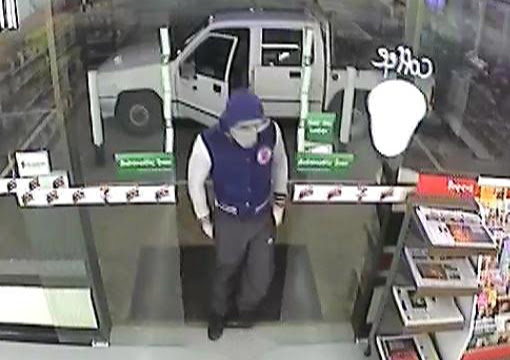 ACT Policing is seeking witnesses to an aggravated robbery which occurred in Fyshwick early this morning (Thursday, September 12).

Around 1.24am a man entered the 7 eleven service station on Canberra Avenue Fyshwick. At the time the staff member was outside the service station, checking fuel levels.

The man was carrying a kitchen knife and walked to a check out, gaining entry to the area and removing a small amount of cash. The employee was threatened as the offender left the store, but was unharmed.

A white Mitsubishi Triton suspected of being used in the offence was located and seized by police from the Reid CIT car park, after a description of the vehicle was disseminated to police patrols.

Police are asking anyone who saw someone similar to the man pictured around Canberra Avenue at the time of the offence to contact Crime Stoppers on 1800 333 000 or via www.act.crimestoppers.com.au. Information can be provided anonymously.

This has to be a fake police media release. I couldn’t find any mistakes.

Wishing he was a third street saint?

Jenny Graves - 22 minutes ago
Kit Oates those people who get impatient, in my experience, tend to tailgate. If you don't, then that's great and I apologise... View
Alex Dee - 1 hour ago
You need to get out more. View
Francesco Merlino - 1 hour ago
Alex Dee Alex Dee I hope you are right! View
event 1

Dom Polegubic - 40 minutes ago
This is a good link to an intro to Croatian wines: https://winefolly.com/deep-dive/introduction-to-croatian-wines/... View
Opinion 11

cats2dog1 - 3 hours ago
Batteries – with lithium ion or lead acid will be the new asbestos problem In 10 years. Salt-water batteries less of a prob... View
chewy14 - 6 hours ago
Capital Retro, That's the point though, you didn't even need "spare cash", the offer was so good that it made financial sense... View
Property 33