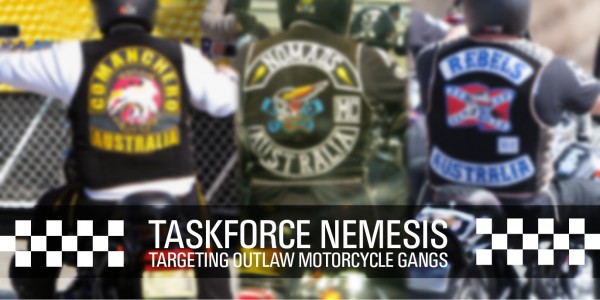 ACT Policing is seeking witnesses to a suspicious fire at a building in Fyshwick which occurred during the early hours of this morning and which it believes to be Outlaw Motorcycle Gang-related.

About 12.15am, ACT Policing attended a report of a fire at a building in Isa Street, Fyshwick. The building was alight and ACT Fire and Rescue were in attendance. Police blocked a section of Isa Street in both directions as a standard safety measure.

ACT Fire and Rescue extinguished the blaze and the scene was handed over to police for investigation.

ACT Policing’s Taskforce Nemesis is investigating the fire. The investigators will canvass the area for CCTV and are appealing to the public for any information that could assist, particularly from witnesses who saw or heard something suspicious near Isa Street around 12am this morning.

Anyone with information that could assist police is urged to contact Crime Stoppers on 1800 333 000, or via the Crime Stoppers ACT website. Please quote reference 6060766. Information can be provided anonymously.

The road blocks on Isa Street will remain in place throughout this morning.

One Response to Fyshwick fire overnight may be bikie gang-related: police
Filter
Showing only Website comments

According to a Sydney paper bikie gangs have declared Canberra a “free for all” zone because of its lack of consorting laws.

Even a feared Dutch gang called Satudarah is among a number of bikie gangs who have been given legal advice that the ACT would be easier to operate out of rather than elsewhere where tough anti-bikie laws are in place.

Leaves us here in the ACT with a warm jolly feeling ..hey.

Bernard Miller - 53 seconds ago
Where is your source for that statement? View
Natasha Van Oudheusden - 12 minutes ago
Jennifer Hartcher as it should be. My point exactly. It shouldn’t be necessary for people to be forced to do the right thin... View
Jennifer Hartcher - 13 minutes ago
Natasha Van Oudheusden 97% of Canberra school staff were vaccinated. No need to mandate really, I dont think there was much h... View
Business 2

Peta-Rene Prior - 18 minutes ago
All kids should go to boarding schools?? Perhaps get all kids attending school to start with. View
Stas Idowu - 51 minutes ago
Synergy Group View
Lifestyle 8

Cary Elliot Johnson - 2 hours ago
Claire Lee Koo because its a democracy with varying opinions on an open column. View
Elizabeth Jones - 2 hours ago
I saw the petition but it wasn't clear it was supposed to be a few fenced playgrounds per region. I know being in an older pa... View
Nat Thomas - 4 hours ago
Megan Munro it’s definitely going to help everyone, it should have been done a long time ago. I hope the gates have fences! View
News 3

kenbehrens - 3 hours ago
Isn't bringing forward future infrustructure builds going to create a construction vacuum down the track? The other issue of... View
shannos - 3 hours ago
Exactly, investors chasing capital gains and creating a self -sustaining ponzi growth model at the expense of our younger gen... View
shannos - 3 hours ago
Too much emphasis on infrastructure and construction which is cyclic transient employment relying on developers growth model.... View
Lifestyle 11

John Moulis - 4 hours ago
A camera was affixed to the beacon on Mount Ainslie when construction of new Parliament house started in 1980. It took one ph... View
Lifestyle 19

@the_riotact @The_RiotACT
The ACT will welcome back fully vaccinated #students in the 2022 academic year, but fully #vaccinated rates in students' home countries could prevent a return to lecture halls https://t.co/22kqylryA9 (1 hour ago)

@the_riotact @The_RiotACT
The end of remote learning is nigh. Here's what you need to know about school life in Term 4 as the phased return to on-campus learning picks up steam https://t.co/edD4GowQ4c (2 hours ago)