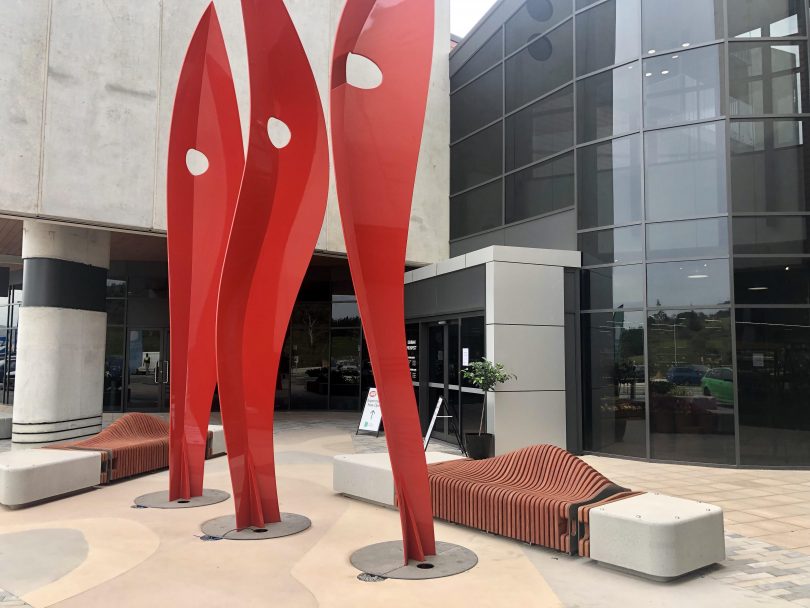 The new Denman Village Shops. A restaurant or gastropub operator is being sought for the shops.

Coombs to get a KFC, Denman Prospect a gastropub – that’s the growing perception of the Molonglo Valley divide that’s leaving Coombs and Wright residents perplexed and frustrated.

The ACT Government seems to have acknowledged the area’s plight with news that a pop-up cafe is to be trialled this month, but it remains small comfort.

Coombs resident Alison Hutchison, who led a petition to the Government about the still unfilled Coombs shops, said this week Molonglo was now a two-tiered district, with Coombs and Wright being left behind as Denman Prospect prospers.

Now the Denman Village Shops, already sporting a newly opened IGA supermarket, is looking for someone to take up a site for a restaurant or gastropub, further reinforcing that belief.

Belle Property Retail Canberra – acting for the developers, the Snow family’s Capital Airport Group – is seeking the right fit for what it calls Canberra’s newest and most innovative suburb.

“An unprecedented opportunity now exists for restaurant/gastropub operators to set up in a precinct currently with no immediate competition,” the listing says.

It says the shops offer a true mixed-use precinct like no other, with specialty retail areas, glass shop fronts with great signage opportunities, landscaped gardens and alfresco dining areas.

“The Centre is anchored by a 1000m2 supermarket and once all tenants are up and trading, will allow for eight specialty shops, a child care centre, a medical centre, a gymnasium and 16 residential terraces located on the upper levels,” it says.

Down the road in Wright, a development application for a Kentucky Fried Chicken outlet on the proposed Koko mixed-use site has been met with dismay, except from hard-core KFC fans and those desperate for something to be provided in the area.

It’s a sight you would never expect to see in Denman Prospect, many in Wright said, wondering what is to become of the suburb first settled eight years ago.

In the meantime, the Suburban Land Agency will trial the pop-up coffee option at Stromlo Cottage in Coombs for four weeks, while it considers a more permanent location near the Coombs shops.

It’s the result of a survey the Agency conducted of Wright and Coombs residents late last year in which 60 per cent of respondents preferred the vacant block near Coombs shops as the location with 35 per cent preferring Stromlo Cottage.

There was an overwhelming preference for Saturday or Sunday mornings with an area for people to stay for 30 minutes to an hour.

“The pop-up café will provide another option for the community alongside other local businesses being established such as the Handlebar café, the proposed grocer at the Coombs shops and the Denman Prospect Pop-up Café (on Saturday mornings),” the Agency said.

It will open on four consecutive Sundays, starting on 10 February.

But if you see yourself providing a more permanent eatery at the Denman Village Shops, contact Nathan Dunn, himself a Coombs resident, at Belle Property on 0488 216 406 for more information and an inspection of the premises.

The empty Coombs shop could take out the award for Canberra’s ugliest, cheapest built, eyesore. Have a close look when you walk past it, what a toilet! People have built beautiful architect designed houses and the parks and landscapes are excellent. Pity this builder didn’t give a toss. Well done Denman Prostpect.

In the meantime, checkout The Handlebar Stromlo for great coffee and beer at Stromlo Forest Park

However the glass half full view could be; Coombs has school, child care, dentist, vet, gym...

Jacob Mac lol. Privately developed with a plan other than collecting rates.

Jose Vega - 23 minutes ago
In Spain loans for your own home is tax deductible.... Investment loans are not... Majority live in their own home. View
Joel Suryawanshi - 3 hours ago
Sarah Young we are also forgetting that the greedy real estate agents are bumping up the prices and attracting investors from... View
Matthew Beale - 14 hours ago
Sarah Young sadly it comes down to being able to buy in only very outer suburbs, if you have a deposit. It is a seller's mark... View
Opinion 91

Susie Armistead - 23 minutes ago
Um no. View
Tim Elliott - 24 minutes ago
Steve Herczeg, it's misleading to use the total area of Greater Sydney for a calculation of Sydney's overall population densi... View
Capital Retro - 27 minutes ago
If I sell my house on a large block to downsize I get no concessions on stamp duty (for the smaller place) or any other incen... View
Community 1

pink little birdie - 2 hours ago
Most of the start up support tends to be geared to that in the technology space or things with end consumer appeal. Most inno... View
Kevin Hodder - 13 hours ago
Rent, rates, stamp duty, taxes, work cover compliance ect and every thing else the act gov stings you! just so you can open t... View
Food & Wine 15

@The_RiotACT @The_RiotACT
Frugii Dessert Laboratory will close on 30 June, almost four months after the death of 'Mr Frugii'. Canberrans have been quick to share their fond memories of the iconic Braddon store https://t.co/EkZvUAF7dv (1 hour ago)