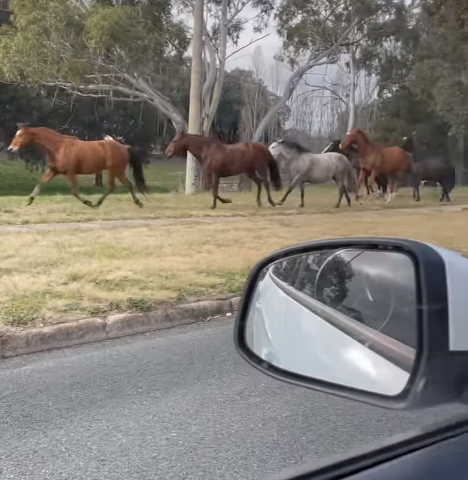 Only in the bush capital – horses on the loose in Kaleen. Photo: Facebook.

Motorists in Kaleen were taken by surprise on the weekend when a herd of horses made a break for it and bolted down Baldwin Drive.

Twenty-one horses made their escape at about 1:45 pm on Sunday, 11 July, after the gate to their paddock was apparently tampered with.

Territory Agistment Director Ryan Walsh said it was the first time anything of that scale had happened in ACT Horse Paddocks.

“It’s one of those phone calls you just dread,” Mr Walsh said.

“We sometimes get phone calls that our water troughs are overflowing, or a horse is caught in a fence, but the last thing you want to hear on the other end of the phone is that there are 21 horses running through the suburbs.

“We’ve never had anything before on this scale. It’s really unusual for the whole herd to get out.”

Mr Walsh said the horses managed to travel quite a distance before they were successfully herded back to safety.

“It took about 45 minutes to catch them and get them back,” he said.

“We had concerned motorists, ACT police, agistees and neighbours … it was a real community effort to catch them and get them back into the paddock.

“Luckily, we had no scratches, no damage to any of them – one’s just a bit tender in the hind leg but that will get better.” 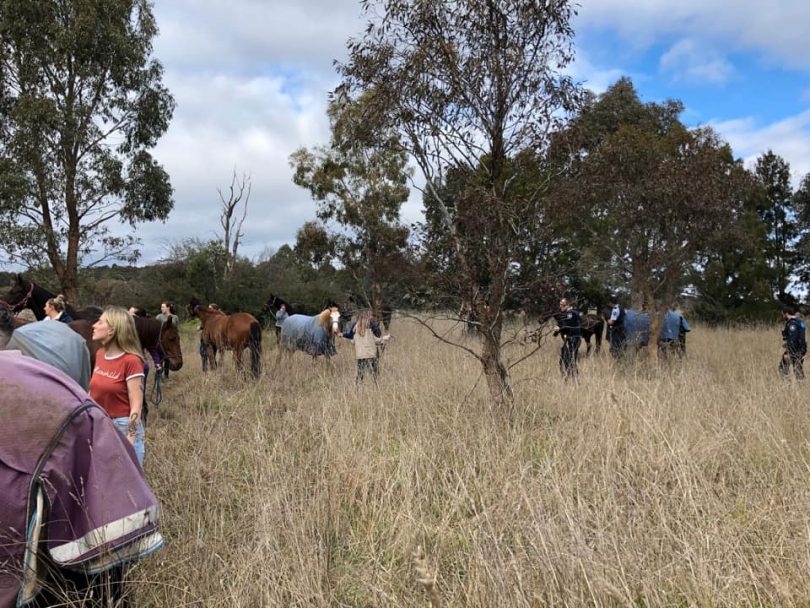 The runaway horses were all recaptured. Photo: Jessica Anne Coombs.

Territory Agistment runs 15 different horse complexes across the ACT, comprising about 2500 acres and catering for 320 horses.

Mr Walsh is dumbfounded as to why anyone would force open the Kaleen gate.

“We’ve had times when people have wanted to get into one of our paddocks for firewood or to go for a motorbike ride but there’s nothing in this one,” he said.

Jessica Coombs grew up in a street near the horse paddocks in Kaleen and recently returned with her own children. She had just put them down for a nap when she heard the commotion.

“I heard a neigh, then I looked out the window and the street was full of horses and police,” she said.

“I’m just glad they all got back safely.”

Arleen Stark - 41 minutes ago
That is all very well Ian, but a branch does not have to be dead to fall. We have had 3 huge branches fall in the last 2 year... View
Colleen Whichelo - 2 hours ago
The trees need to be in the bush where they belong & where no humans reside. Bloody gum trees are the worst most dangerous of... View
Ulrich Belcher - 9 hours ago
Took a full 3 years to have a council tree inspected after I lidged the job and chased it up many times, even though it was a... View
News 240