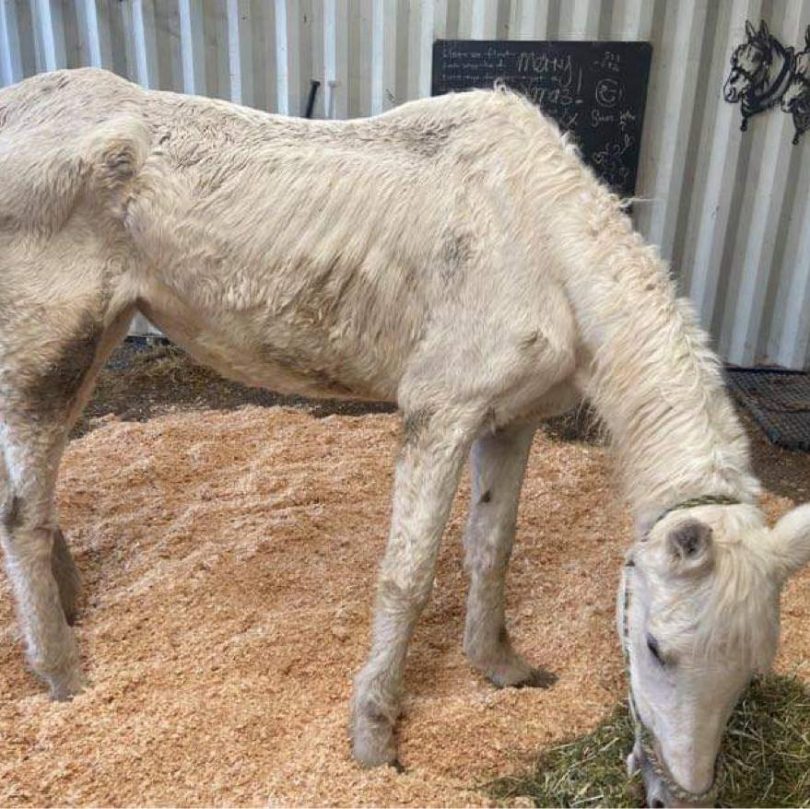 Xena is getting her best shot at a new life after being rescued by Heavy Horse Heaven. Photo: Facebook.

The tale of an emaciated, abandoned mare being given a second shot at life has captivated social media followers this week, but it turns out that’s just the tip of the iceberg.

Now known as Xena because of her fighting spirit, the mare was rescued by a team from Heavy Horse Heaven – a haven for heavy horses in Yass now celebrating its 10th year.

In that time, the charity has made a difference to the lives of 130 horses – many of which have found safe pastures and loving homes to see out their days on a lifetime lease.

It’s been an amazing ride for Karen Hood, who founded the organisation after noticing nothing similar existed.

“I’ve always loved heavy horses, so when I finally got a property, I bought myself a beautiful Clydesdale mare,” she says.

“I was driving out the gate to work in Canberra when I saw her standing there, all alone. That’s not good for horses, so I started researching online for rescues.”

When that search failed to turn up any heavy horse rescue organisations, Karen’s friend challenged her to start one of her own.

Heavy Horse Heaven started on Karen’s nine-acre property, but Canberra father and daughter duo Don Burt and Karen Dykhoff heard about the cause and bought a further 93 acres near Yass purely for the organisation to lease. 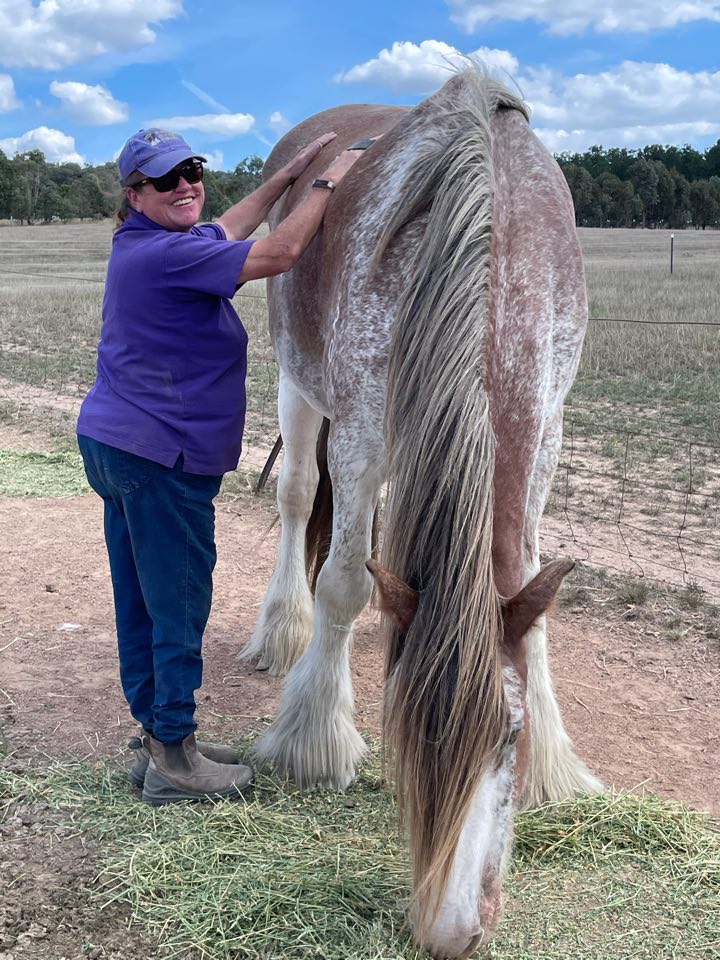 “They are wonderful people and have been so supportive,” Karen says.

In fact, Heavy Horse Heaven has found a number of financial supporters and a massive online audience – which is fortunate, given the cost of keeping horses.

“We have built our reputation up and people donate to us,” Karen says. “We hold fundraisers … we have wonderful people who trust and donate to us.”

Karen currently has 16 horses on the property and 10 in foster care. She juggles her responsibilities at Heavy Horse Heaven with a job in Canberra and a home business, Maykazz Embroidery and Printing.

“I’d like to build my home business up so I could stop the 80 km each way commute and devote more time to the horses,” she says. 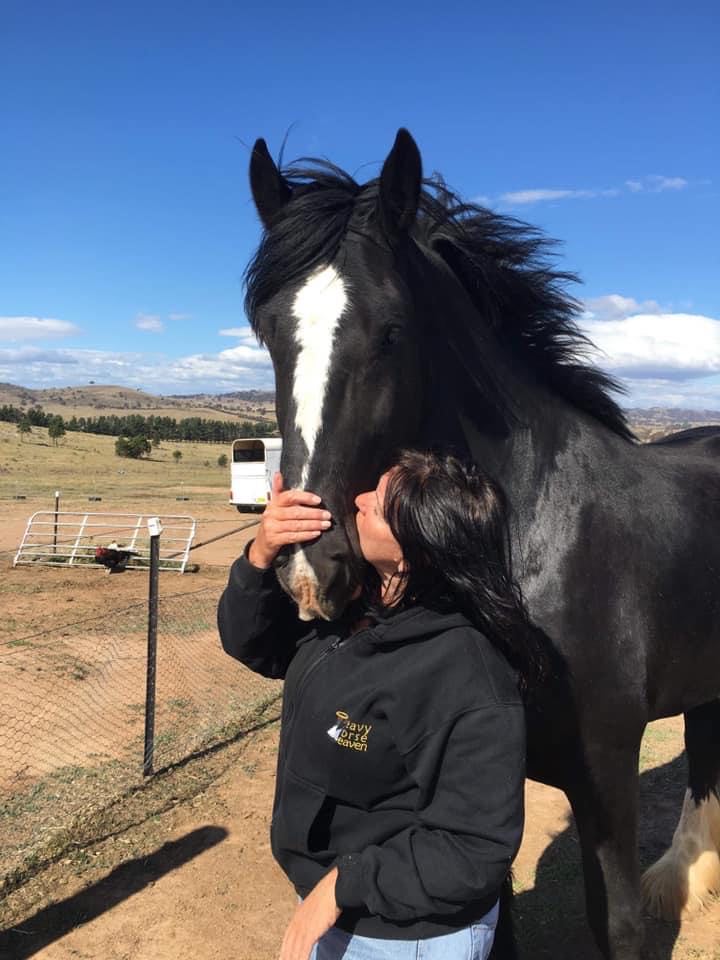 Karen Hood with one of her beautiful heavy horses. Photo: Heavy Horse Heaven.

So how do horses end up at Heavy Horse Heaven? Karen says there are a variety of reasons.

For some people, the cost of keeping a horse just becomes too much; others fail to realise getting a horse is a 30-year commitment, and some simply underestimate the work involved.

“We get some from people who are elderly or unwell,” Karen says. “Sometimes their families just don’t know what to do. The last five came that way.

“Some people hit hard financial times, or there’s a family breakdown. There are lots of reasons.”

READ ALSO: Entering the ‘nightmare-ish’ world of the horse owner

The saddest is neglect, and that was Xena’s fate. Even then, Karen doesn’t judge, choosing instead to look at what can be done to rehabilitate and, hopefully, rehome.

When Karen and her team found Xena, she was standing lifeless in an isolated paddock, badly dehydrated and malnourished.

“She couldn’t move, there was no life in her eyes. I thought the kindest thing to do was to get the vet out to put her out of her misery,” she recalls.

“I thought if that’s going to happen, at least she can have something to eat before she goes.

“I got the bucket of feed that I’d brought to catch her, and suddenly she came alive.

“We thought, she’s got some fight in her, we will give her a go.”

Unsure whether Xena could even stand long enough to be floated to her new home, they practically crawled up a four-wheel-drive track.

“We got to the top and I could still see the tip of her ears and I just burst into tears,” Karen says.

“We got her home and she’s fighting hard. She’s 15 to 18 years old – it’s hard to tell because her teeth are so broken and horrible. She’s been chewing anything she can find.

“We still don’t know if she will make it, but she’s a fighter. She’s an amazing little thing.”

The fact that Xena isn’t even a heavy horse makes little difference to the volunteers – they couldn’t go past an animal in such dire need.

But it is heavy horses that truly have Karen’s heart.

“It’s their temperament,” she says. “They seem to be really trusting and, even when they have been let down, they will come back and trust again.

“It wasn’t for them our country wouldn’t be what it is today. I just love them.”

Entering the ‘nightmare-ish’ world of the horse owner

Friend in need has lots of friends indeed

@the_riotact @The_RiotACT
The 'Canberra Region Advent Calendar' compiles 24 mini products from various small businesses across the #ACT and surrounding region, with a very distinct #Christmas theme. 'Tis nearly the season, after all https://t.co/uhC760mQOw (36 minutes ago)