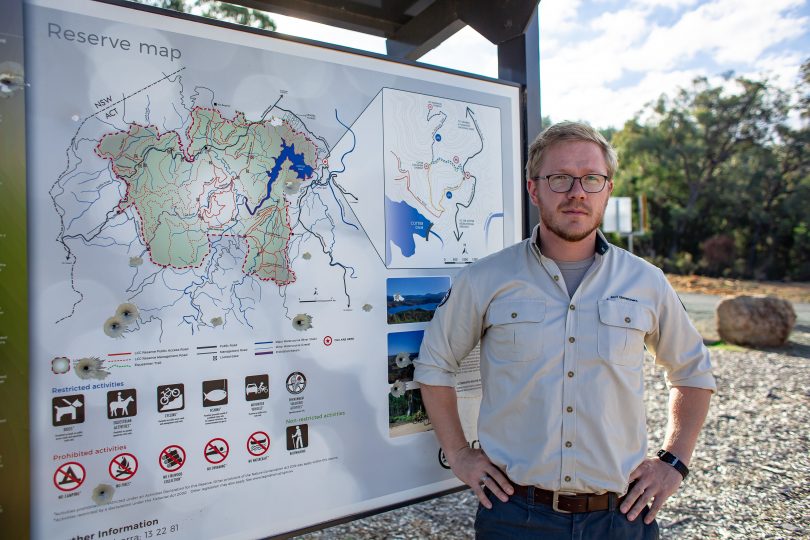 Lower Cotter Catchment area manager Nick Daines said there is no “silver bullet” to fix the spate of crime in the area. Photos: George Tsotsos.

ACT Parks and Conservation will cordon off two roads in the Lower Cotter Catchment in the coming weeks to crack down on the number of cars being dumped and set alight in the area.

Lower Cotter Catchment area manager Nick Daines said an array of anti-social behaviour including cars being driven into trees, driven off cliffs, being set alight along with illegal shooting, camping and fishing were the motivators behind closing the two rural roads.

Mr Daines said that over 100 cars had been dumped and set alight in the reserve in the past decade. He hopes that by moving the gates, previously installed down the track, further up towards the roads will deter offenders.

“Car fires are still one of the biggest concerns for us just because of the fire risk and the impact that can have on the catchment,” he said. “Luckily in winter that is less of an issue because even though they are still going out there and still seeing car fires, it doesn’t pose the same bushfire risk.

“Not every car fire ends up like Pierces Creek because that just happened on a really bad weather day. In the last 10 years, we have had over 100 dumped cars set alight in the area so we are working with police and RFS to give us better powers to remove dumped vehicles.

“We want to speed up that process because once it is dumped, we don’t want to encourage hoons to come out the next night and set fire to it.” 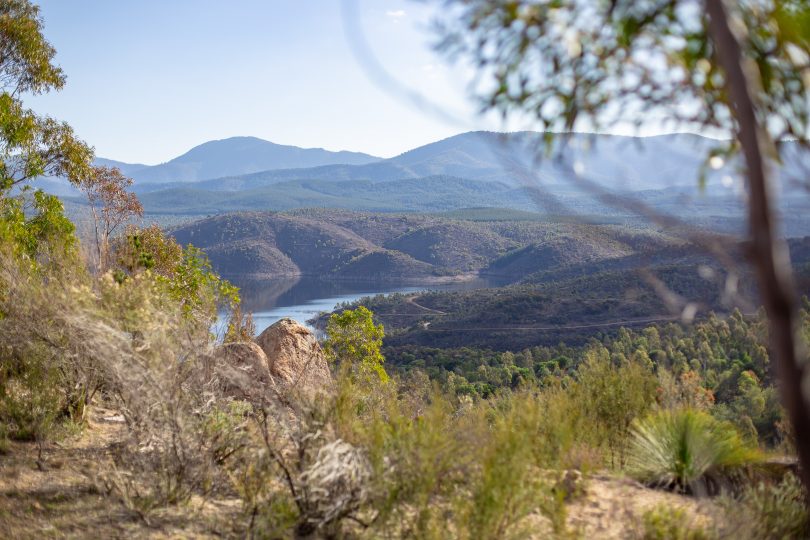 Over 100 dumped cars have been set alight in the Lower Cotter Catchment in the past decade.

Mr Daines said the Lower Cotter Catchment is a “recovering landscape” and shared concerns that more car fires in the reserve that is home to the Cotter reservoir could damage Canberra’s second-largest supply of clean drinking water.

He pointed to November’s Pierces Creek bushfire, a blaze started by a stolen car that was set alight, to highlight how damaging car fires can be.

“Every time there is a fire, it takes so much longer for the reserve to recover,” he said. “During a fire, the sediment beneath the forest washes down into the dam which means we can’t drink the water which is 25 per cent of Canberra’s water supply.

“Pierces Creek proved that we needed to act on this stuff. If the wind had been blowing the other way on that day, it would have come straight through the water catchment and the water out of that catchment would have been undrinkable for the next decade.

“This is why we are taking it so seriously.” 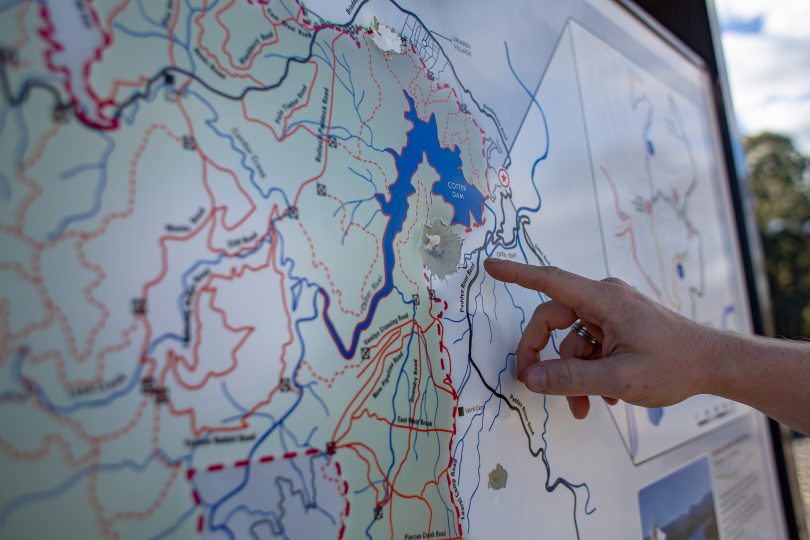 Mr Daines points out a sign that has been riddled with bullet holes.

Mr Daines said there was no “silver bullet” that could put an end to the spate of crime, but hopes the closing of the roads will allow “passive surveillance” by the community, alongside the ACT Policing’s dedicated rural patrol unit and the ACT Government’s recently installed CCTV cameras at choke points.

“We are moving the two gates further up the track to protect the really sensitive areas. If these areas were set alight in the next few years, it would be decades before we could realistically fix them up,” he said.

“By moving the gates back up the hill towards the main road, it means that there is a little bit of passive surveillance. There are around 100 kilometres of track out there in the catchment and we are only closing a couple.

“The cameras themselves might not do it, the police’s night patrol might not do it and moving the gates alone might not do it. But suddenly when you put all those things together, we have put together a pretty good compliance framework that will stop these crimes.”

more police - how many do you have to catch to end these cars being burned out? 2-3 people tops im guessing

Ahhh, the usual “management strategy” used by ACT parks. Lock it up so we don’t have to do our job!

Amazing how every other state in the country are able to manage these areas while still letting people use them. This is ridiculous. ACT Parks are flat out lazy and incompetent. They should be having funding slashed since the only thing they appear to do is have contractors install locked gates.

This plan has Green fingerprints on it.

Does Parks ACT realise this is a really popular bouldering and climbing area. Looks like we'll have to be throwing mountain bikes into our vehicles now!

I think you will find that there are a lot of Rainbow Trout in the Upper Cotter. These are not native fish.

Please don't say it's going to be Bullen Ranges Road.

Who is that tough lookin Ranger with hands on hips? rrrrrrrrrr

Will stop nothing. If you've driven that far to do that kind of thing, they will just drive to the next gate. Next step the whole place is locked up and no legitimate users allowed in to enjoy.

Walking for kilometers on fire trails through a degraded, unshaded landscape. Joy!

I hardened up a long time ago John! :-D

Indeed it does John! 😄

Oh all right John .. but only after I fortify myself with a croissant and high altitude Ethiopian coffee. 👍

Fair enough as long as you allow honest people access by simply having a key pickup and registry. Seems like another excuse..

Locking up every bloody road in the Brindies sick of these bloody bureaucrats.

Rather than take your anger out on bureaucrats, why not shake your internet fist at the douchebags that ruin it for everyone. The ones that start fires, the people who can't walk 1km and instead steamroller their big arsed 4WD all over the nature park destroying it for everyone etc.

Troy Scott - 6 minutes ago
I think I will boogs I was pretty good at it at 7 View
Steve Hugler - 3 hours ago
Troy Scott there’s still time for you to make a shot put comeback mate. 3 years and you could be at the Olympics!... View
Liam Timothy-Nesbitt - 5 hours ago
Tariku Fitzgerald-Holmes We’re up there... View
Lifestyle 30

Wendy Watson - 12 minutes ago
beautiful thankyou View
Judith Griffiths - 31 minutes ago
Would love to be there in person! View
Olwyn-Anne Cook - 48 minutes ago
Missing it so much this year, thank you for all the beautiful photos. 👏👏👏👍🏻👍🏻👍🏻 View
News 22

kenbehrens - 47 minutes ago
Vaccines offer protection against severe infection and in most cases, death. It doesn't prevent people contracting Covid, get... View
kenbehrens - 1 hour ago
Sam, With respect, you appear to be poorly informed. Flu typically kills the elderly or those with health conditions. It is a... View
JC - 1 hour ago
Not going to disagree. Facts and politics don’t mix. Regardless I would still trust what comes out of Andrew Barr’s mouth... View
News 19

Caroline Le Couteur - 1 hour ago
Please don't release a heap of plastic rubbish. We have enough problems.... View
Tracy Parker - 2 hours ago
Perth do a duck derby every year where around 15000 are released, they re use them and collect them all at the end of the eve... View
Micah Woodburn - 2 hours ago
Emmeline Grace an event I can get behind. This floats my boat...or duck View
News 237

Jarrad Job - 1 hour ago
Doug Hovi Have to replace all the trees they cut down to make room for all the solar farms in the future🤣... View
Robert Woodrow - 2 hours ago
Tahlia Bruce or possibly not .... View
Dee Kaden - 3 hours ago
That could almost be 5,400 homeless off the streets!!! View
Opinion 2

Dilkera - 3 hours ago
Absolutely ludicrous to have a grand drive in entrance on Canberra Avenue, which is long past being a grand avenue. It is a c... View
News 35

yolo2014 - 5 hours ago
No offence to Penrith as it is always a great game playing against them but the reason they have been removed from the Sydney... View
Ben Rabaud - 5 hours ago
Scott Neil, the RSL have been our major sponsor for the last few years. View
show more show less
*Results are based on activity within last 7 days

@The_RiotACT @The_RiotACT
It's war at Murrumbateman, where a particularly assertive #magpie has it in for #winemaker Bryan Martin - and he has the video footage to prove it https://t.co/wuXWsjvgdt (18 minutes ago)

@The_RiotACT @The_RiotACT
The iconic #BatemansBay Bridge is almost completely gone, all that remains is a few piers rising from the water https://t.co/1k3VBOuBMt (1 hour ago)

@The_RiotACT @The_RiotACT
An #audit report has questioned the numbers underpinning the next stage of Canberra's light #rail network https://t.co/He3ZzwWw3Q (2 hours ago)