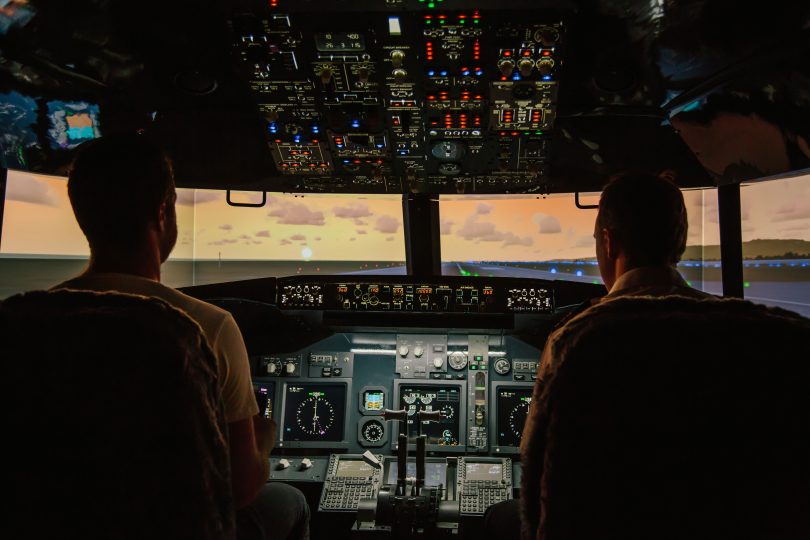 Take the controls of a Boeing 737-800 at Jet Flight Simulator Canberra. Photo: Supplied.

It’s not the best start to my first lesson flying a Boeing 737-800. Distracted by the view after taking off from Canberra Airport, I crash the plane somewhere over Googong, amid an angry wail of warning sirens.

My first-officer, Trevor Vickers, is quite decent about it, and it’s not like he hasn’t seen it all before.

While we’re all in a holding pattern when it comes to overseas travel, there’s a glimmer of hope for those who miss the heady experience of international flight.

Jet Flight Simulator Canberra offers budding aviators, those who want to relive flying to their favourite cities, and people who simply fancy checking out what it’s like to fly a plane the chance to do just that.

I’m in the latter category, and as I step into the cockpit in Lyneham, I realise that getting this thing off the ground is going to be a little trickier than driving my Mazda to the shops and back.

The simulator is an exact replica of a Boeing 737-800 cockpit. The flight deck features all the instruments and controls needed to fly the plane. Rudder pedals are on the floor, throttle to the right and the control column (or yoke), used to manage altitude, is directly in front of me. 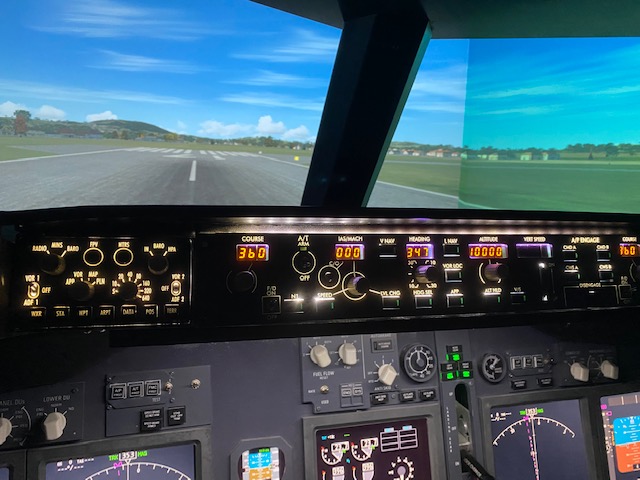 Getting ready to take off from Canberra Airport in the jet flight simulator. Photo: Michelle Rowe.

Trevor, who owns the business, is my flight trainer. While he is not a qualified pilot, he reckons he knows enough to cope in a crisis. People booking a formal jet flight simulator session will be paired with one of a rotating team of professional pilots to guide them through the experience.

Trevor talks me through what’s what during our pre-flight briefing. Something about flaps, arming the throttle, getting the thrust levers sorted and depressing the togas. I’m so confused that I’ve got no idea whether we’ve even had ground clearance before we’re barrelling down the runway.

If things weren’t tricky enough, it turns out I’ve got to steer with my feet. I’m trying to stick to the centre line of the runway, but my amateur rudder pedalling has us veering all over the place like a kid after an 18th birthday party.

There’s a fair bit of crosschecking going on and our ground speed is increasing (no idea how that happened). Before I know it, we’ve lurched into the air and I’m circling Canberra like a total pro.

Canberra is one of more than 22,000 airports you can take off from in the simulator. Each offers a representative experience of that location, projected onto the cockpit windscreen.

Trevor says old Hong Kong International Airport is a popular choice for flyers – a terrifying combination of poor visibility, flats so dense and high that planes’ landing gear almost skimmed the rooftops, with the added challenge of surrounding mountains and a short runway flanked by Hong Kong Harbour.

Other requests include flying into Paris, New York at night, and the Egyptian Pyramids.

“Some of it is about sightseeing,” says Trevor, who adds they get the odd request to fly under Sydney Harbour Bridge or to put the Boeing into a barrel roll.

Other people are looking for a challenge, such as flying through snowstorms and thunder, or using instruments only. 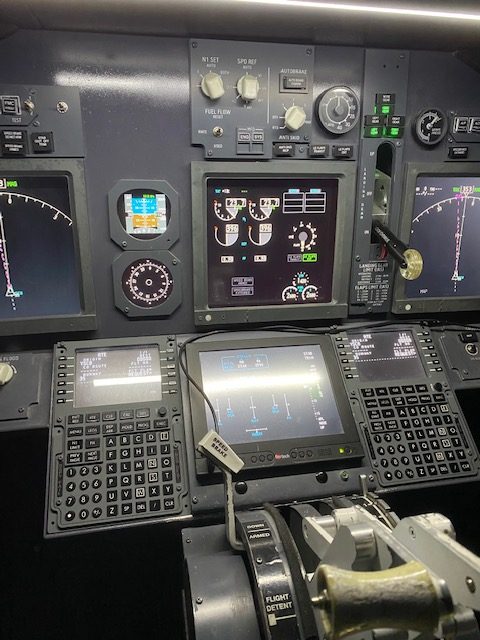 The instrument panel is an exact replica of a Boeing 737-800. Photo: Michelle Rowe.

I’m doing a bit of both – instruments and visual flying – and I’m relieved that Trevor has dissuaded me from attempting a landing at Bhutan’s Paro International Airport, a terrifying experience I had a few years back in which our tiny plane appeared to fly so close to the towering mountains surrounding us that we could almost see what the villagers were having for dinner.

Canberra seems a much safer choice until my unfortunate crash landing. Despite my amateurish attempt, I love the flight experience and definitely would do it again.

Trevor says many of his customers have been bought a flight simulator experience as a gift; others sign up because they really want to understand the intricacies of flying (and can ask qualified pilots anything they want during the simulator experience).

Experienced pilots also use the simulator for test practice. While Trevor’s simulator is not accredited for formal training, it’s an excellent start when it comes to getting to know your way around the controls.

“For a lot of people, it’s a real experience,” he says. “They really think they are flying.”

Or crashing, as the case may be.

Jet Flight Simulator Canberra experiences range from $99 to $299 depending on time spent in the cockpit. Tailored experiences for groups or individuals are offered.

Sue Sutton - 31 minutes ago
My Mum has wonderful neighbours who have been helping keep her lawn in check. Thank you Ota and family xx... View
Bill Gemmell - 1 hour ago
Barbara Eglitis I was wondering how long it would take. Seriously, I had the Fowles St Park project in Weston in mind. Sugges... View
Barbara Eglitis - 1 hour ago
Naturally occurring weeds, like the ones growing down the middle of Northbourne Avenue which looks disgusting??? View
Opinion 13

kenbehrens - 50 minutes ago
A few years ago when we were visiting our son in Sydney, there were blankets and items of clothing under shelter on the stree... View
jwinston - 1 hour ago
harcm said “tim_c – what a load of rubbish you talk. What if your schooling was completely disrupted by domestic violence... View
Acton - 1 hour ago
The money you are giving out of misplaced guilt to a street beggar is just funding their drug, smokes and/or booze addiction.... View
News 1

It’s the gym, Jim, but not as we know it

@the_riotact @The_RiotACT
A rehab #clinic specifically designed to assist #COVID-19 patients manage the ongoing symptoms of the virus is being set up at the University of Canberra Hospital https://t.co/WvD1IRUJRf (38 minutes ago)