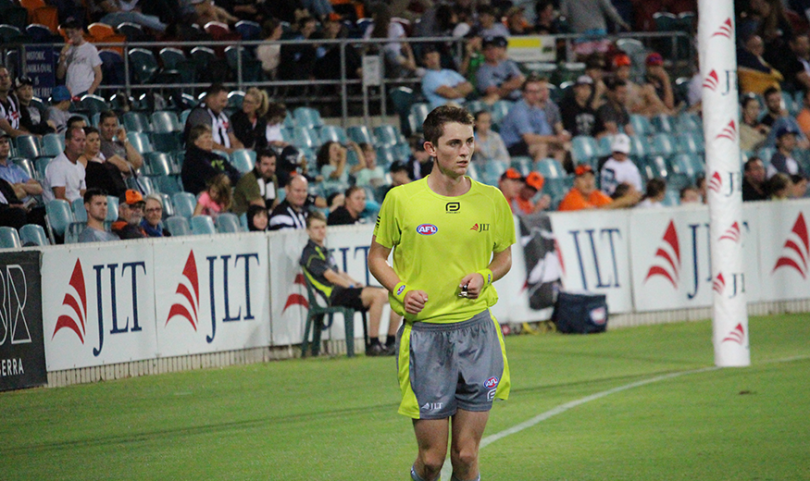 Michael Barlow gave up his studies in the nation’s capital to pursue his dream of being an AFL umpire in Sydney earlier this year. Photo: AFL Canberra.

Canberran Michael Barlow will take a giant step into AFL umpiring after he was selected to be a boundary umpire for the GWS Giant’s clash with the Bombers on Saturday night (26 May).

Round 10 of the 2018 AFL season will remain in the memory of the former AFL Canberra and ACT NEAFL boundary umpire after he was thrown the opportunity to share the field with the likes of Brendon Goddard and Callan Ward.

Barlow gave up his studies in the nation’s capital to pursue his dream of being an AFL umpire in Sydney earlier this year and his dream was realised when he was named to officiate at Spotless Stadium tonight.

With an impressive resume, including the officiating of last’s years NEAFL grand final and being awarded the NEAFL Boundary Umpire of the Year in 2017, Barlow will now take the next step in his umpiring career.

“Barlow’s appointment is well deserved for a hardworking and determined young umpire,” he said.

“The AFL Canberra and ACT based NEAFL Umpiring groups have continued to produce and display a very high standard across the three disciplines. Barlow’s progression through the ranks highlights this.”

NSW/ACT State Umpiring Manager, Damian Anderson wished Barlow all the best and encouraged him to enjoy the experience.

“Michael has been a high performing boundary umpire in the NEAFL competition over the past few seasons, culminating in the 2017 NEAFL Grand Final,” Mr Anderson said.

“He has shown the determination and desire to improve and progress to the highest level possible.

“It is a great reward for his continued efforts and also shows that the high-performance umpiring program at our state league level across NSW/ACT allows a clear career pathway to the AFL.

“We wish Michael all the best for this year and look forward to seeing him out there at the SCG and Spotless Stadium.”

Heidi Kark - 38 minutes ago
Simon Trommestad I believe your example to be logically consistent with what I’ve said above- In that the death would still... View
Jonny Ivan - 3 hours ago
write this year off View
Joanne Mitchell - 5 hours ago
David Warwick and why did they remove the mask mandate two weeks before the first case while Sydney’s numbers were still cl... View
News 47