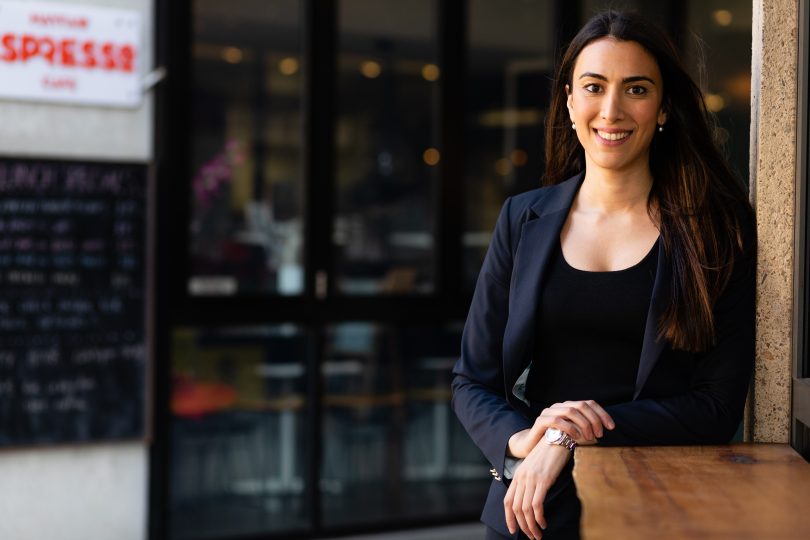 Golnar Nekoee: Director at BAL Lawyers and now on the board of Menslink. Photo: Daniella Jukic.

“Let’s break the stigma against mental health, and support men speaking out about it.”

Forty minutes into my conversation with Golnar Nekoee, what impresses me most is not the many and varied professional goals she’s already achieved. It’s the way she continually brings our conversation back to a personal passion; removing the stigma surrounding mental health issues, specifically that of young men.

After completing a double degree at ANU, Golnar started working in financial advisory and later changed direction to work as a lawyer. She worked hard and developed a specialisation in estates and succession law. Golnar deals with all aspects, including Will drafting, estate administration and estate and Wills litigation.

Estates and Succession law is a good fit for Golnar. In May 2017, she joined a prominent Canberra law firm, Bradley Allen Love.

Golnar is passionate about advocating for her clients. “Wills and estates are my core areas of work. I want to bring a refreshingly candid, authentic and dignified approach as a lawyer and as an advocate.”

“As a lawyer at BAL Lawyers, I deal with real people and not just corporations, banks and other corporate entities. I love that. I meet many of my clients at times of extreme stress or grief and I derive a great deal of satisfaction from assisting them during those difficult times.”

BAL Lawyers promoted Golnar to the role of Director after just one year of working with them.

“Even though I was young, they saw my potential and invested in me. It is a great privilege to work among some of Canberra’s most preeminent lawyers. Above all, the firm values its relationships with its clients, which is exactly what I was looking for.”

The firm chooses a different charity or community organisation to support each year. This year they’re supporting Menslink, an organisation that provides mentoring, counselling and education programs for young men in the Canberra community. Golnar has now taken on the busy role of joining the Menslink board of directors.

“I jumped at the opportunity to be involved with Menslink,” Golnar says. “I am passionate about mental health awareness because it touches us all at some point in our lives.

“I know that there are many organisations and crisis support networks specifically for females, but not that many for young males. The statistics show that suicide still remains more prevalent among young males in Australia.”

“If we support our young men and if they can comfortably speak about their mental health and reach out for help when they need it, we are all going to have a better community. Those young men are going to make better colleagues, friends, partners, husbands and fathers, and what a gift that would be to any community.”

“I wanted to be a female voice on the board. Menslink is focused on men’s counselling, mentoring and guiding other men, but it is often the women who encourage their young sons or other family members to seek help. It is often the mothers of the young men who derive the greatest benefit from the help received by their sons.”

Menslink relies on donations and sponsorships from the Canberra community. They host two big events each year. The Big Night Out held in March, and the Business Breakfast coming up in September. Attended by nearly 500 members of the community, many of Menslink’s business sponsors book out these events.

This year’s Business Breakfast guest speaker is Australian rock icon, Jimmy Barnes. He will give a personal testimonial about rising above his own dark times, “talking about the things that we want guys to be able to talk about,” Golnar says.

Golnar has a personal vision for Menslink – to work towards ensuring all young men in Canberra who are in need of support or one-on-one mentoring can turn to Menslink regardless of their background, means or personal circumstances.

It’s clear that Golnar is not defined by her numerous achievements and successes. What sets this lawyer apart is her genuine passion to fiercely advocate for her clients in the legal arena and her determination to normalise the conversation around mental health issues.

Steve Aust - 13 minutes ago
Colin Parton tell 1 story here View
Louise Flint - 43 minutes ago
James Daniels I was sent there for advice before I took a redundancy package. They ignored my superannuation and taxation que... View
Patrick Barrett - 4 hours ago
Dylan your fault View
News 22