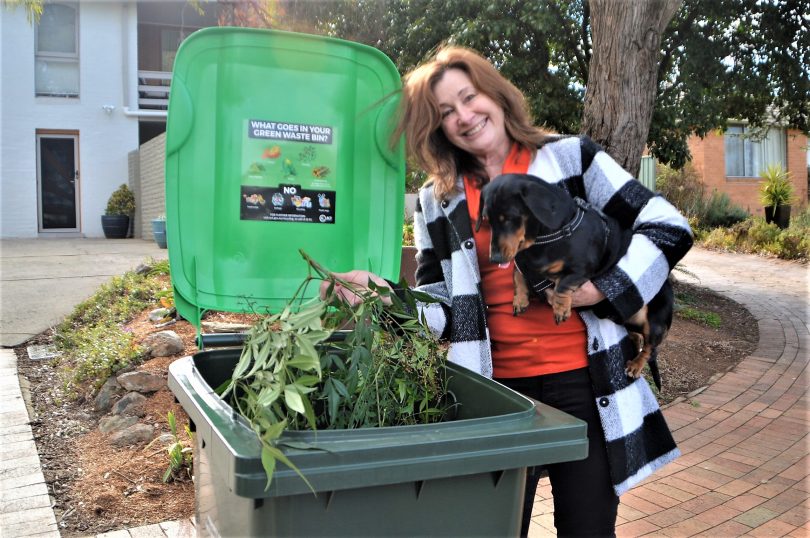 Keen gardener Tori Hennig of Evatt is the first of thousands of Belconnen residents to receive a green bin. Photos: Glynis Quinlan.

Keen gardener Tori Hennig is looking forward to an easier time maintaining the large garden around her 50-year-old Evatt home after becoming the first of thousands of Belconnen residents to receive a green waste bin.

Gone are the days when Ms Hennig will have to struggle to reverse her trailer to the green waste drop off point and she also believes the new green waste collection service will greatly benefit those who don’t have trailers, particularly elderly garden lovers.

Ms Hennig is one of 4,253 Belconnen residents who have signed up for the service since registrations opened on August 1.

The rollout of the first green bins to those who have signed up began on Monday (August 13) and the first collections in Belconnen will start on September 3. Ms Hennig said she has a lot of large established trees and fruit trees in her garden and has been looking forward to receiving the green waste collection service – registering as soon as she received a notice about it.

“We have one at our coast house and we just love it,” Ms Hennig said.

“I’ve got a lot of very large established trees and there is a constant amount of debris they drop – it’s going to allow me to easily dispose of that.”

Ginninderra MLAs Yvette Berry and Gordon Ramsay were on hand for the delivery of the first green bin, with Ms Berry saying the fortnightly service will “help residents keep their gardens clean, tidy and looking amazing”.

Ms Berry said that Belconnen is quite a bit older than Tuggeranong, adding to the appeal of the collection service.

“We have lots of big blocks where people have large gardens and large trees and so I think there has been a very enthusiastic uptake here in Belconnen for green bins,” she said. 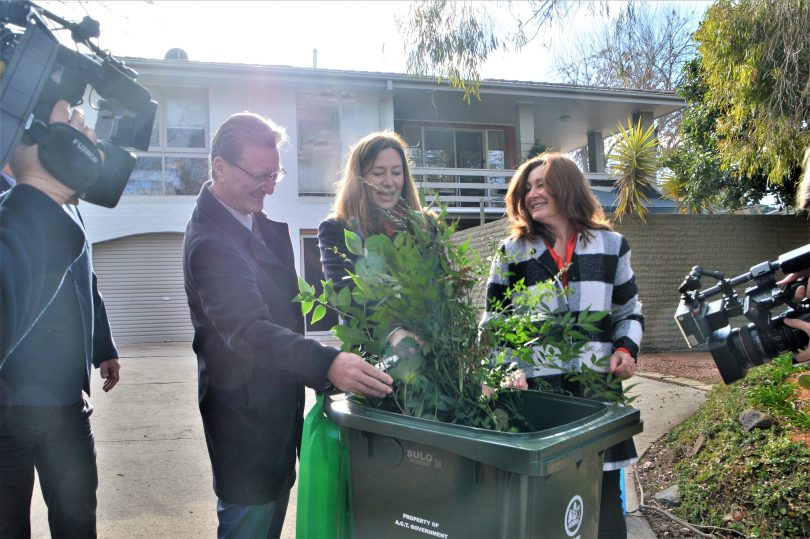 Mr Ramsay said the service provides benefits for both householders and the ACT generally.

“There’s been a number of wonderful things to come out of it. Certainly one of those is that it helps people with their time – people don’t have to be packing things off in the trailer or the back of the car and heading down to the green waste area,” Mr Ramsay said.

“But it also means that the green waste that does come can be mulched together and used as part of the landscaping across Canberra as well.”

Mr Ramsay said that the service has been extremely popular to date, with nearly half of all households in the pilot areas of Weston Creek and Tuggeranong joining the scheme.

“Residents including those living in the older suburbs of Holt, Cook, Kaleen, Macquarie and Hawker as well as newer suburbs like Lawson can register to receive a green bin for a one-off $50 fee, or free for eligible concession card holders.” 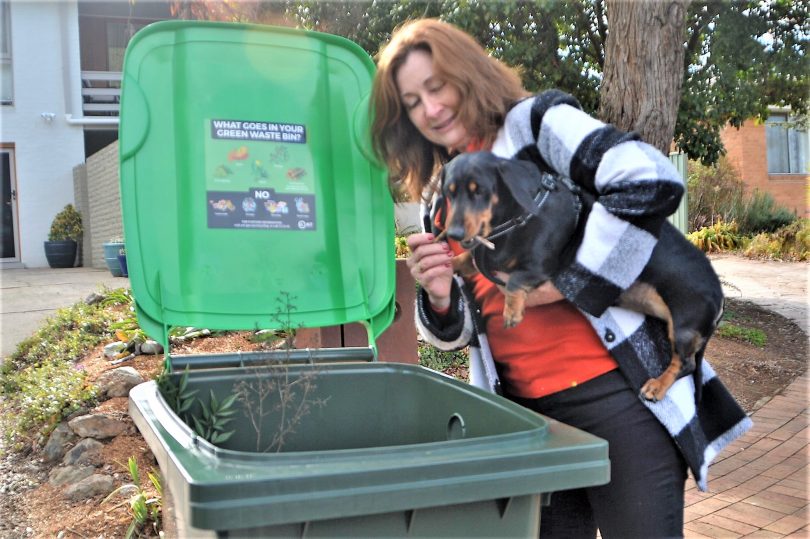 Tori Hennig’s pet dog tries to play his part by putting his stick in the new green bin.

Ms Berry said the Government was driving forward with its commitment to deliver green waste bins to Canberra residents with the roll-out across the rest of Canberra to occur by mid-2019.

“All the people who pick up the kerbside bins are our members and so obviously the more bins that are out there the more work for our members so this is a good initiative of the ACT Government as far as we’re concerned,” Mr Pinkas said.

In terms of the challenges in doing the work, Mr Pinkas said they include people putting wrong material in the green bins or trying to pack too much in.

“It’s the same as with other bins – people jam stuff in the bins and they don’t empty properly. It just slows the whole process down and so people have to have a little bit of common sense,” Mr Pinkas said.

While I find the green bin handy and manage to fill it pretty much every fortnight, I find I still need to do a trailer trip every 6 or 8 weeks, but the trailer is not as full.

The good thing about the green bins is they allow you to quarantine the weed species you want gone immediately in a secure bin until collection day. The scheme would be enhanced by a kerbside chipping service like some NSW councils offer.

Adding food waste would be fantastic

You can take your food waste to a new giant compost system at anu i think it is...? Even meat products. 👍🏽

Jess Oh - 3 minutes ago
lol 1. It's called intersectionality, and Zoya understands it very well. 2. It's Aboriginal*. The term you used is outdated a... View
Rob Thomas - 20 minutes ago
I walked into the street, the on coming traffic was about to strike me, luckily I decided I'm physics blind. View
Richard Orchard - 31 minutes ago
So only white people can be racist right? It’s the white people who have to read this article, and repent I’m assuming? A... View
Community 3

Susanne Gardiner - 6 hours ago
Didn't talk to them, but was one of two families on a playground... The other was Hugh Jackman and his son. View
Maya123 - 10 hours ago
Ah yes, but have you seen surveys of what is attractive to women? It's not as tall as you might imagine. Every survey I have... View
Capital Retro - 13 hours ago
I exchanged "hello's" with John Wayne in a Hong Kong shop 50 years ago. He was a tall dude - 1.93m to be exact. I just checke... View
Lifestyle 2