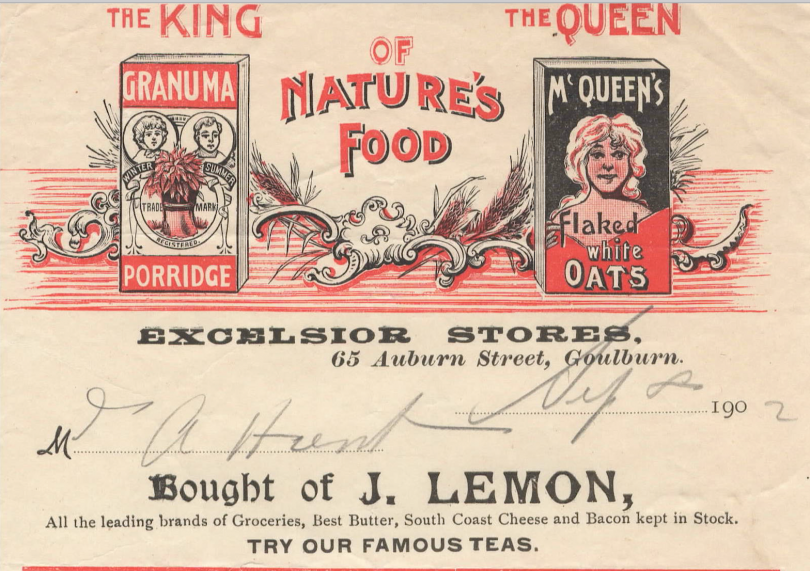 Trusted to fill and home deliver complicated orders, the business’s colourful personalities shaped the middle of the city from the late 1800s to the mid-1900s.

Goulburn Heritage Group researcher Linda Cooper, who kept the dockets for many years, has now ferreted out stories of the small business men behind them. Her revelations include builder, timber merchant and legendary bandmaster John Cody, who arrived in Goulburn as the contractor on Kenmore Hospital, and later the Goulburn Technical College in Bourke Street.

If he was alive today, Cody would be stoked the Bourke Street college has become the Hume Conservatorium – a music educator for the region – because outside of his building enterprise he developed young band players into accomplished bandmasters and musicians.

Cody’s musical career began as a soloist cornetist. He became bandmaster of the Australian Light Horse Band, and led his players to win a marching championship in Ballarat. He became one of Australia’s best known band leaders in the 1920s and 1930s. 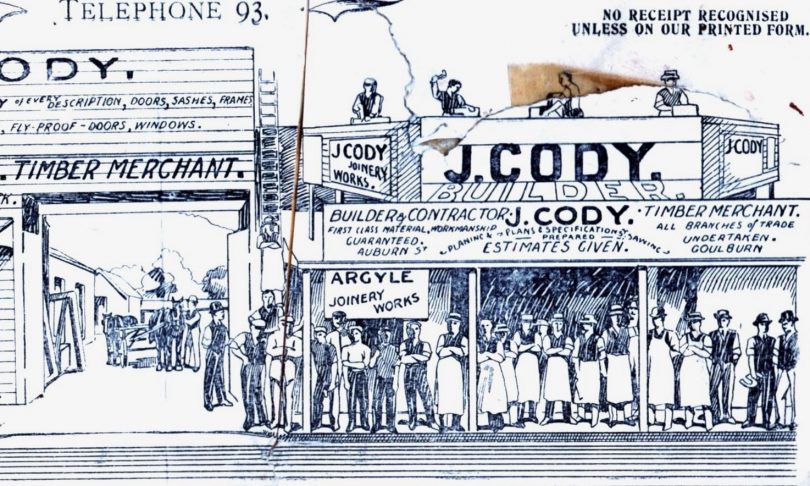 John Cody and Sons was a major employer of skilled tradesmen in Goulburn. Image: Supplied.

When he died in January 1954, the Penny Post said: “Apart from the larger buildings, John Cody built streets of houses in Goulburn, and theatres, hotels and banks in many southern towns.”

In 1908, when the Liedertafel Society bought Lander’s Hall in Goldsmith Street, Cody provided his expert supervision for free for painting and renovating the building throughout.

Linda remembers the timber buildings being demolished in the 1960s, next door to the MLC and Odeon theatre in Auburn Street. 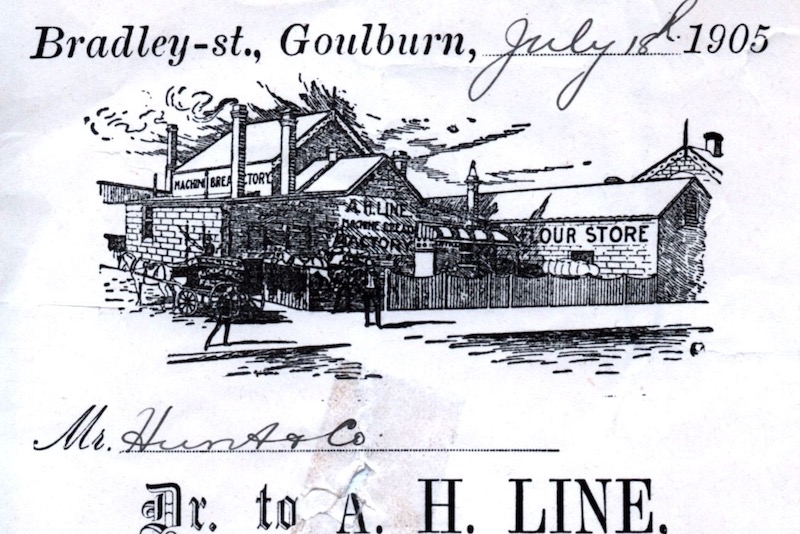 AH Line introduced machinery into a busy bakery and was able to turn out 720 loaves in one cycle. Image: Supplied.

Goulburn has been synonymous with exceptional bakers and pastry chefs. Well before the likes of Morton’s, Bryant’s and Trappers, in 1900, AH Line operated the only bakery outside of Sydney and Newcastle where machinery performed much of the work, including an elevator which hauled up sacks of flour to the second floor in Bradley Street.

Once unloaded, a patent sifter and blender cleaned and purified the flour in preparation for a kneading machine. Two mechanical arms thoroughly mixed every portion of the flour, salt, yeast and other ingredients.

The kneader handled three-and-a-half sacks of flour to prepare a batch of dough in seven minutes, as opposed to nearly two hours’ hard work by hand. After the dough had been thoroughly kneaded, it was turned into wooden troughs. Two large ovens baked 720 two-pound loaves in ‘Bailey-Baker’ patterns.

Line opened the Geisha tearooms in Auburn Street, where smartly dressed waitresses served “the cup which cheers but not inebriates” while the windows displayed delectable dainties such as chocolates, fruits, cakes and pastries. 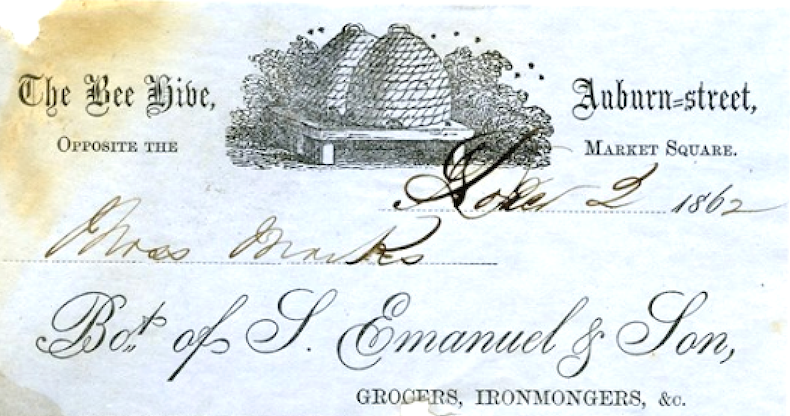 Elsewhere in Auburn Street, Emanuel & Son ran The Bee Hive Store, next to Russell Lane. They bought the season’s first wool clip in 1858, and 35 ounces of gold dust from the Abercrombie River.

At the time, they also displayed another specimen from a gold mine at Bungonia, which attracted universal interest. The Bungonia goldfield was 3km from Inverary and 37km from Goulburn, via Bungonia.

Another way of building a profile was exhibiting on the show circuit, as saddlers I. Bushell and Company, which traded in Auburn Street, found. Entering the Wagga Wagga Show in 1899 with three entries, they won two first prizes – for a gentleman’s saddle and bridle, and for an excellent set of single buggy harness.

Grocers’ dockets often advertised tea or other products, and the tea merchants probably contributed to the cost. In 1923, dockets from the JT Lemon’s shop in the Model Arcade advertised Kinkara Golden teas, while other dockets promoted brands of oats for porridge.

JT Lemon’s was founded in the late 1800s, and had originated in Grafton Street. In 1907, the Auburn Street premises was purchased, and became the Model Arcade. The grocer added ironmongery and crockery, and later a furniture department.

Another long-serving grocery storekeeper, George Stacey, who traded at 291 Auburn Street, became prominent in civic affairs. He founded a local branch of the financial institution, the Starr-Bowkett Society.

Goulburn’s early grocers were sprinkled all across town and flourished until supermarkets arrived. The grocers’ dockets imaginative illustrations helped promote a secure future for themselves, their families and community for generations. 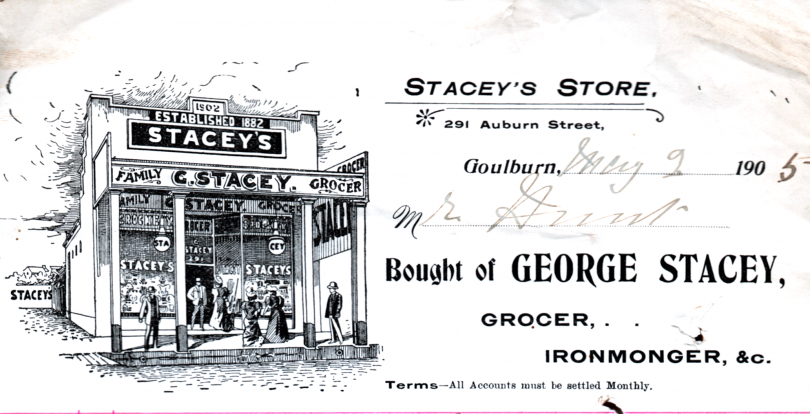 What a great collection of memorabilia, thanks for sharing the images and some of the history behind them.