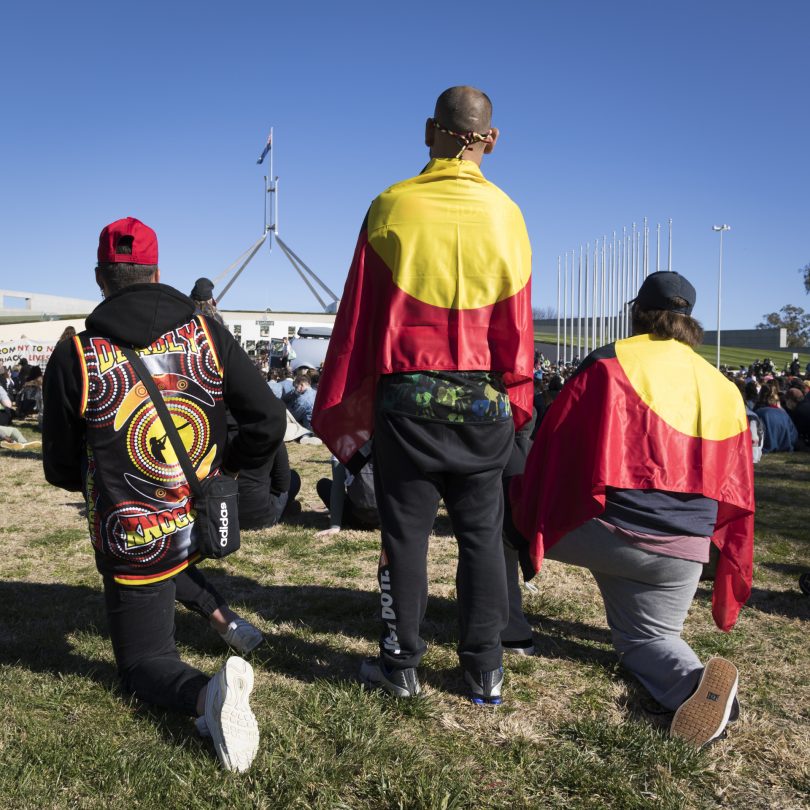 The ACT Government has accepted the recommendations of the Indigenous Our Booris, Our Way report which found that Aboriginal and Torres Strait Islander children in the ACT’s child protection system were over-represented and experienced discrimination and cultural dislocation.

Aboriginal and Torres Strait Islander children were more than 16 times more likely to end up in out of home care in the ACT in 2017-18 than non-Indigenous children, the report found.

Almost two-thirds of Indigenous children living at home who have a caseworker working with them and their family did not have a connection to country identified.

“Each of the actions listed under these recommendations contribute to a systemic reform of the child protection system in the ACT,” according to the report.

READ ALSO: Thousands gather at Parliament House to put Indigenous issues back on the agenda

Through the review, the Government has agreed to implement universal access to family group conferencing, enshrine the child placement principle in legislation and establish an Aboriginal or Torres Strait Islander Children’s Commissioner. The child placement principle prioritises the placement of an Aboriginal or Torres Strait Islander child with members of their community.

More funding to culturally appropriate professional legal and advocacy services for Aboriginal and Torres Strait Islander families and more opportunities to engage the child and their family in the decision-making process was also agreed to.

“Our Booris, Our Way has already delivered change. The Steering Committee has had an enormous and confronting task and I sincerely thank them and all the community members who have contributed to the Review,” said the Minister for Aboriginal and Torres Strait Islander Affairs, Rachel Stephen-Smith.

“With their guidance, we are making real progress towards improving the lives of Aboriginal and Torres Strait Islander children and young people.

“But we know there is more to do and the Committee’s final report provides a roadmap for us to work together to deliver the outcomes we all want to see – Aboriginal and Torres Strait Islander children and young people living safely with their families, connected to their community, culture and country.”

The full Our Booris, Our Way report can be found at Strong Families.

What if the children’s lives don’t improve under this plan? Will the responsibility fall at the feet of the ATSI community? Or will the failure and accountability be blamed on everyone else, again?

So we will continue seeing aboriginal children put in danger and returned to abusive, neglectful environments in the name of “Cultural sensitivity”. Sounds great….

Deb Williams Wray - 44 seconds ago
Mataina Rozowsky it’s so much fun haha View
Deb Crisp - 6 minutes ago
So super proud of my sister starting the Gordon Park rock spotting with my daughter's the first week of lockdown... 5 weeks l... View
Karenne Eccles - 26 minutes ago
This i has been happening in Kiama also ... View
Opinion 91

Alan Vogt - 3 minutes ago
No. Maybe in another 20 Years. View
Vanda Catanzariti - 5 minutes ago
Yes... lets do this! 🏆 🏁 View
Julia Ross - 9 minutes ago
As long as it's in warmer weather. The June long weekend was just too cold for spectators and drivers. View
Lifestyle 30

Kay Pearce - 23 minutes ago
Helen Kook thats just what Grandma (Mrs Prowse) would do!!... View
Helen Kook - 2 hours ago
Knowing my grandmother it would have been an easy walk back in those days View
News 22

The promise of better light rail access to the Mitchell business hub is now a reality with services commencing on...
Community 45