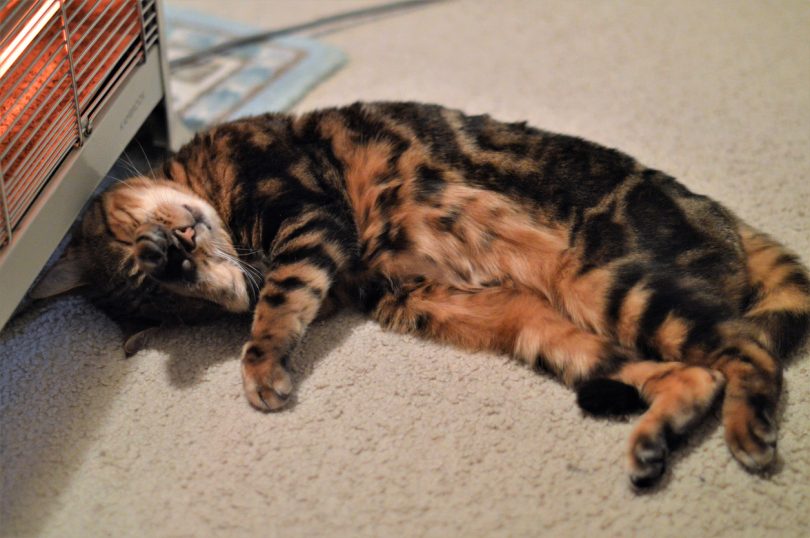 ACT cats such as Pebbles from Kaleen (pictured) will have to be registered annually if the Government’s proposal goes ahead. Photo: Glynis Quinlan.

The ACT Government is considering making both dog and cat owners register their pets annually and charging them a yearly fee for doing so.

The proposal – including what fees would be appropriate – has been canvassed through phone polling in Canberra in recent weeks and represents a radical change from the current situation where dog owners only have to pay for one lifetime registration and cats aren’t registered at all.

According to the Government, annual registrations for cats and dogs in other Australian jurisdictions range from around $30 – $60 per year but there is also the option of having no registration fee here.

The Government is currently consulting with the community through its YourSay website about a draft ACT cat plan which includes a proposal for cat registration.

A spokeswoman for ACT City Services Minister Chris Steel said the issue of cat registration is currently just a matter for consultation and no decisions have been made.

“Registration may help provide better information about the number of pets that live in the ACT, including where they are housed and who owns them,” the spokeswoman said.

“It enables lost pets to be reunited with their owner more easily and more effective enforcement of laws like cat containment.”

The spokeswoman would not identify the amount the ACT Government was looking at for annual registrations, saying the Government would consider the outcome of community consultations.

“In other Australian jurisdictions, annual registrations range from around $30 – $60 per year for desexed and microchipped cats and dogs,” the spokeswoman said.

“An option that will be considered is that the registration process does not include a fee.”

The spokeswoman confirmed that the phone polling had taken place, saying it is one of the many tools used to gather community input.

“Pet registration was included in a recent round of research, and the results will be used to determine the Government’s position on pet registration,” she said.

About one-quarter of Canberra households currently own a cat and a move to register cats would have a significant impact.

A Better Suburbs Statement released by the ACT Government in September last year said a system for annual registration of dogs and cats would enable the establishment of a centralised government database to assist and enforce responsible pet ownership.

The statement also said that all new suburbs must be cat containment suburbs, and Transport Canberra and City Services should develop a planned roll-out of cat containment for Canberra’s older suburbs.

The draft cat plan which is currently out for consultation covers a range of issues including:

Canberrans looking to have their say on the plan are invited to:

The consultation process opened on 6 April and closes on 28 June.

Keeping a dog as a pet provides the whole family with far more exercise and health benefits than cycling does and doesn’t cost the rest of the community jot. Pets keep people and the whole community sane and in touch with the world.

If the government needs revenue and a safer Canberra then require cyclists to register and insure their bicycles each year and be licenced.

Enough of taxing A to pay for B with BS arguments to justify it.

I oppose blanket cat containment. Would be open to a modest registration fee, possibly with exemptions for pensioners.

It it contributes to a reduction in the loss of native birdlife by free-range and feral cats then I am in favour.

Following the survey on feline containment, the next stage is proceeding to interrogation and water-boarding.

I live in NSW and I paid lifetime registrations for my animals, a yearly fee on top is money grabbing.

pets help people cope. why would you tax that? they already cost a fortune to keep.

Rita Scholl we have cat registration in Perth, and night time containment. Good idea but unenforceable! The only cats registered are those that would be desexed, microchipped and kept inside regardless of registration.

Good idea if it includes reduced fees for sterilised pets

How will they police the regulation? Thry can't manage dangerous dogs.

When was the last time they asked anyone to confirm lifetime registration is in place for any per under current regulations?

Didn't we do this for dogs before the lifetime registration came into effect?

What does Andrew Barr plan to do with cats whose owners refuse to pay? Euthanise them?

If it's desexed it's supposed to be a lifetime registration

Nothing other than to raise revenue. My cat lives indoors and is micro-chipped. I won't be paying any more for the privilege of caring for, and loving, her.

Barr and his cronies will be taxing breathing soon. Damn tram cost so much more than they have admitted and they are desperate to find funds.

No I don’t agree

Pets are great therapy and needed for companionship

Looking after a pet is cost enough

No is my response!

Capital Retro - 13 minutes ago
Good grief! Do we really need this level of oversight? View
jwinston - 2 hours ago
Here we go…sigh View
News 1

Capital Retro - 14 minutes ago
That kangaroo may be blind. It's not uncommon and causes them to get separated from the mob, stumble and be unable to graze.... View
Property 24

Alex Stinziani - 1 hour ago
Meg Power Bro I knooooow, I sent this to Tim yesterday too 😭😭... View
Meg Power - 2 hours ago
Alex Stinziani can we buy this together and live our best lives?... View
Community 12

Pauline Parks - 2 hours ago
Congratulations on 70 years together, lovely to see you well looked after as you did for others Ken & Pauline View
Marilyn Fasham - 2 hours ago
Wonderful neighbours we miss you very much View
News 21

MERC600 - 3 hours ago
Mr Barr "“It would be really unfortunate if the Christmas gift to the nation is the highest ever level of cases across Aust... View
whatwik - 5 hours ago
Think of it as indicative only, with caveats, and not in any way specific. It's going to be a long school holidays for some. View
News 31

Peter Graves - 3 hours ago
It's slightly off-topic, but Larry Noye did write the definitive biography of King O'Malley. To whom we owe a great debt for... View
Community 2

kenbehrens - 4 hours ago
Largely, I agree, although it's not those who are educated and trustworthy that are the problem is it? Lockdowns are to prote... View
News 3

Liza Jensen - 4 hours ago
Does anyone know where I can find information about how Landlords apply for the land tax rebate if they give tenants a reduct... View
News 26

Marty Hoenig - 4 hours ago
Yes by the closure by Sports Australia of the AIS Fitness Programs ..... View
Community 62

Catherine Mckean - 4 hours ago
Noni Evans I have one in my back yard. View
show more show less
*Results are based on activity within last 7 days

‘Your cat won’t be coming back, ever!’: claws out in cat debate

@The_RiotACT @The_RiotACT
Queanbeyan and Wagga Wagga are justifiably regarded as Australia’s top sporting cities per head of population. In the first instalment, Tim Gavel makes the case for Queanbeyan https://t.co/JyawrTtn6R (41 minutes ago)

@The_RiotACT @The_RiotACT
The ACT has recorded 16 new cases of COVID-19. Yesterday, there were seven. At least 11 of the new cases spent part of their infectious period in the community https://t.co/MFGTkKiEVH (1 hour ago)

@The_RiotACT @The_RiotACT
Watch this morning's rescue of a kangaroo from the freezing waters of Lake Burley Griffin https://t.co/MDcZa2adT1 (2 hours ago)