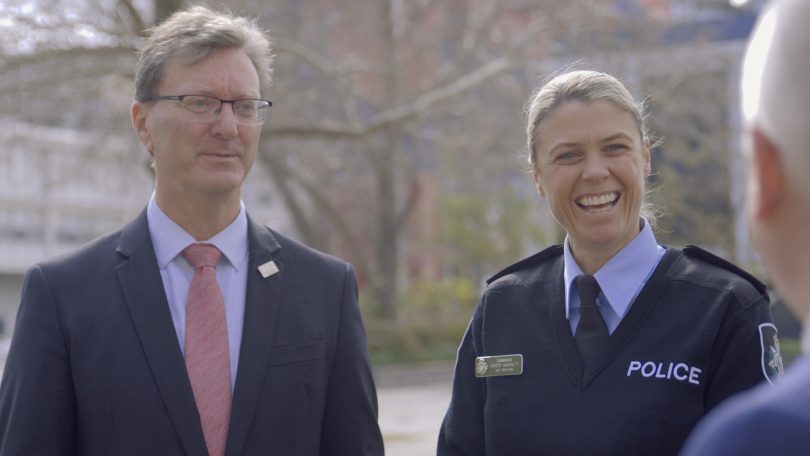 The ACT Government believes there is no evidence to prove that anti-consorting laws work in Australia after the ACT Legislative Assembly passed the Crimes Legislation Amendment Bill 2019 on Thursday afternoon (1 August).

Earlier this week, ACT Policing announced that they had shut down and seized Belconnen’s Lakeside Tattoo Parlour under confiscation of criminal assets legislation, an ACT first. It is alleged the business was involved in laundering money for a bikie gang in the ACT.

But Attorney General Gordon Ramsay disagreed with the assumption that if police had anti-consorting laws, they could have stopped money laundering at the tattoo parlour taking place in the first instance.

Anti-consorting laws make it an offence to associate or speak with habitual criminals, or other people deemed to be dangerous or dissolute, whether in public, private or online.

The laws, which are in place in New South Wales, South Australia and in Queensland, state that speaking to two or more convicted criminals on several occasions, after receiving a warning by police, is punishable by imprisonment.

Mr Ramsay said there is no evidence that proves anti-consorting laws work in other states and territories across Australia.

“When you look around Australia, it is very clear that anti-consorting laws haven’t been working in the jurisdictions that have them to stop organised crime happening,” Mr Ramsay said.

“The Opposition from time to time say that anti-consorting laws are the silver bullet. It is clear that the evidence does not support that. We will continue to work in an evidence-based way.

“What we are doing is rather than looking at things that don’t have a track record and that don’t have the evidence of working, we will continue to provide to the police the legislative vehicles and resources that they need.

“We will continue to work to undermine that business model that criminal gangs have, we will take away the profits, and we support the ACT to be a strong, effective and safe community.”

The Attorney General said the Crimes Legislation Amendment Bill 2019 will strengthen firearm laws by simplifying prosecutions for unauthorised possession and use of firearms, ensuring that prosecutions are not delayed due to a technical argument.

Mr Ramsay said the legislation also introduced mechanisms to support the operation of the National Unexplained Wealth Scheme that enables all participating jurisdictions to work together to effectively deprive criminals of their wealth, irrespective of the jurisdictions in which they operate.

He said the legislation strengthens the ACT’s organised crime-fighting abilities and emphasises the importance of evidence-based policy measures to combat organised crime.

“The Bill is another example of the ACT Government’s methodical, measured and evidence-based approach to targeting, disrupting, and prosecuting criminal gang members,” Mr Ramsay said.

“The ACT Government will not back down in its effort to fight organised criminal gangs operating in Canberra.”

“The ACT is an island in New South Wales and at the moment, we are a haven for outlaw gangs,” Mr Coe told Region Media. “It shouldn’t be that way. We should be a nimble jurisdiction that is best equipped to deal with these sorts of problems.

“Instead, we are dragging the chain and we are not doing what we should and that is bringing in anti-consorting laws to give the police every opportunity to crack down on illegal behaviour.”

Because we do not have the anti consorting laws here in Canberra other OMG’s have moved here because they can still socialise and do there illegal business which they are finding difficult now to do in NSW. This has resulted in turf wars with the existing gangs and all these extra shootings in the suburbs, Just wish the Labor government would give the police all the tools to do the job!!!!!

I’d rather people were arrested for actual crimes instead in ‘consorting’ anyway.