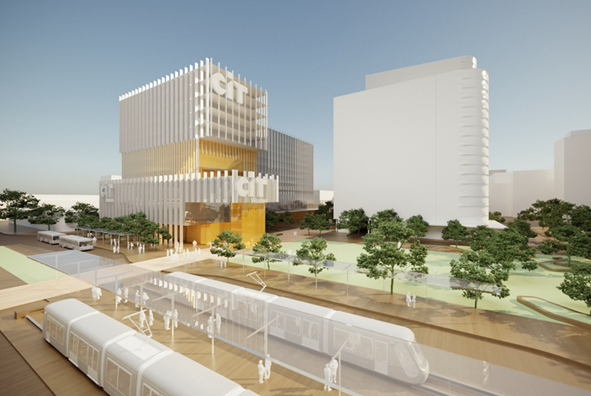 An artist’s impression of the Woden CIT and interchange development. Image: ACT Government.

Work is expected to start by the middle of next year on a new public transport interchange as the first stage of the new Woden CIT precinct after the ACT Government announced approval of the business case for the $250-300 million project.

Also planned for the multi-function facility will be a light rail station for when the network is connected to Woden, and a combined accommodation and training unit for young people at risk of homelessness.

The government says the on-campus multi-bed ‘Youth Foyer’ will provide integrated learning, accommodation and support for young people who are committed to education and training.

The new CIT will eventually replace the Reid campus and focus on cyber, technology qualifications and service skills, as well as those for business, creative industries, hospitality and tourism.

The government last month heeded public feedback about the potential height of the project, opting for buildings up to 12 storeys, featuring activated common areas and green spaces, instead of a 16-storey development.

Minister for Tertiary Education Chris Steel said the CIT-interchange project, to be built on and adjacent to the site of the existing bus station, would create a new front door to the Woden Town Centre, with a well-lit pedestrian boulevard connecting the interchange, CIT campus, the square and Westfield shopping centre.

“Better public transport is a key part of the project, with the construction of a new, safer interchange on Callam Street for buses and we’ll build Woden Station ready for light rail to arrive,” he said.

The government says the construction project will create at least 520 new jobs and be part of the ACT’s Jobs and Recovery Plan to rebuild the economy from the impacts of the COVID-19 pandemic.

”The ACT Government is set to deliver a flagship CIT facility, passenger-friendly public transport interchange and multi-bed Youth Foyer which will see Woden transformed over the next four years into a modern, vibrant and well-connected town centre,” Chief Minister Andrew Barr said.

He said the new interchange on Callam Street would deliver on the Woden Masterplan objectives and provide a safe, welcoming and connected environment with more bus stops and bus layovers supporting future increases in services.

The government anticipates that students will be able to start studying at the new campus at the beginning of 2025.

Mr Barr said CIT Woden would not only support 6500 students a year to become highly capable and sought-after graduates that are work-ready in their given field, it would also help stimulate the larger economy by supporting local business, industry and employment.

”We are focused on building jobs now to create the careers of tomorrow, with smart classrooms, simulated learning environments, commercial kitchens and hands-on training spaces to help prepare students in fields such as IT, cybersecurity, hospitality and design,” he said.

Minister for Tertiary Education Chris Steel said that beyond the 520 construction jobs, many teaching and learning positions would be offered once the facility opens in 2025.

The next step will be to go through the planning approvals process to enable construction on the public transport interchange to start next year.

The Woden Valley Community Council has not been happy with the direction of the project, arguing the current interchange area was not the best site for the CIT campus.

Having treated us to a binge-fest of Hollowmen, the ABC comedy channel should now do the same with Utopia – just the thing in the lead-up to the ACT election.

Hopefully the new bus interchange design works out how to get people in and out of the Woden town centre as fast as possible. Since the hopeless new bus network started, it now takes me over an hour just to get from Kambah Village to the Deakin medical zone. Whilst much of the additional time has been caused by having to go in a roundabout way via Cooleman Court, getting in and around central Woden and changing buses before getting back out Woden again adds another ten minutes.

Nothing like dusting off old election promises. Much easier than thinking up new ones!

It would be nice to think that this new, purpose-built CIT will not be rendered redundant after a mere few decades. Buildings should not be disposable- sensible forward planning and good design are paramount.