Graffiti watch – All the arms we need

As seen in an inner-north stormwater drain: 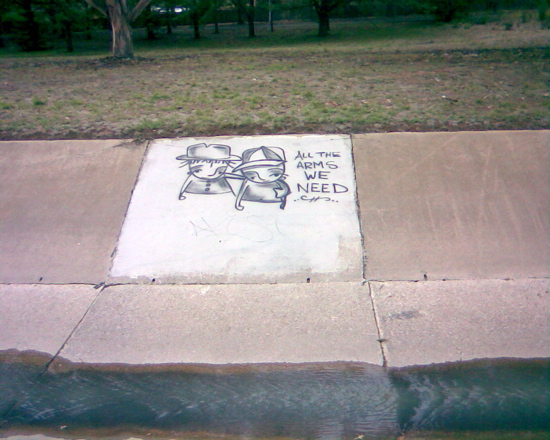 Well I thought it was kind of cute.

Get stuffed rapehammer. Most cunning use of the letter R in English history.

and there ya go – it did not work…

a link to the same is

Not having much luck with links today either so if this bombs I am sorry.

Had quite a few people stop and say that it was good to see someone making the walls colorful.
Plenty of people drove past and beeped and waved – just as many drove past and shook their heads.

1st time embedding a youtube clip so apologies if it does not work.

i think the term is ‘defaced’ or you could use ‘damaged’ or ‘vandalised’.

“Graffitiâ€™d”? Worst use of an apostrophe in the history of the English language. Ever.

the way things are going you and I might have to start seriously thinking about a great wall of west belco mate.

You sheep squaddies really are getting defensive.

I see no need to go live in a gated retirement village – although I’m sure I could find you one that has been graffiti’d.

Do the crime, do the time.

baa baa follow what you think is pop-culture spoonhead. You wouldn’t know pop-culture if it bit you and gave you pop-culture rabies mofo.

West_kambah, I sort of can understand what it is that you are saying. However, Canberra is not a concrete monolith like NYC, Barcelona and London. We have had parkland incorporated in the design of this city so that it would not be seen as said concrete ghetto-whatever.

Secondly, many of these graffiti ‘artists’ from the major metro areas on Earth have now made a successful transition into being seen as artists in their right. This happens here, so why can’t those choose to express themselves via this art form, do it in a legal way by either getting permission to paint whtever they wish, the same that any other artist would in order to get an installation commisioned in this city?

Softhead? That doesn’t even make sense. But if you insist on starting a ‘shittest random insult competition’, then you can be…Wadface, or Dingletits. Yes, that’ll do.

ride the train in melbourne and see all the defaced factory walls etc.

unless there has been a massive expansion of govt owned manufacturing, i would say the majority of premises being maliciously damaged are privately owned.

but keep trying to justify your criminal urges.

every opinion on RiotACT is a minority opinion.

My opinion seems to be a minority one in this forum, so I can’t see how that makes me a sheep. If I was a sheep, however, I would come around to your house in the middle of the night, Maelinar, and bite you. Then you would get sheep rabies. Yeah.

Please go live in a gated retirement community, you have no place in an actual city. Canberra’s a poor sort of place for graffiti and other type of real city experiences, it teeters on the edge of having a little bit which is enough to have nannas whinge, but not quite enough to give a normal city experience. However if you ever leave your suburb to visit a big city in Australia or overseas you’ll soon realise that illegal graffiti is a primary carrier of the character, emotion and feeling of a city through the material confines that surround inhabitants into their everyday cultural experience. Without graffiti, which has been a common city feature since cities were first built, there is a lack of vibrancy and a lack of trancendental social participation. That is, a property may be private, but the city and the physical and mental space it occupies in the lives of the people that live there is a commons.

Its quite different in other cities as Canberra is basically a suburb of detached houses – pretty much nothing else here. Graffiti in Canberra is hence seen more often as personally offensive to property, as the property is assumed, more often, to be someone’s personal property. It is ‘personal property’ or the individual being affected by ‘the city’ i.e. graffiti scallywags. Graffiti in a big city has the opposite. Because most big city environments are all-encapsulating non-personal property such as roadworks, bridges, monolithic buildings and structures (in comparison to Canberra), it is the individual affecting the city. It is the individuals attempt to create some influence and communicate some information in a wholly impersonal and alienating environment.

bah – buggered the tag – JB – can you give us an edit button please.

I believe this debateâ€™s already been well and truly had – http://the-riotact.com/?p=4067.

and once again Here

Ill post something up when I get home – i do not want to you tube it @ work.

Bonfire is going to love it.

Renee Osburne - 7 hours ago
It’s disgusting we pay rates and expensive ones at that, and the Government can’t even provide a basic service. Even the... View
Mateusz Jan - 9 hours ago
Anthony Nolan did you give the goats to the act government... View
Public Sector 41

Phillip Scharf - 7 hours ago
Liam O'Toole you said it and it's not like anyone's suggesting an alternative solution View
liberalsocialist - 8 hours ago
This would be of the same ilk (politician) that demands immediate responses and replies for all their questions yesterday - a... View
Richard Cottrill - 9 hours ago
The UK follows the model of totally outsourced IT (at least in the departments I consulted to). They were routinely fleeced b... View
News 53

kenbehrens - 8 hours ago
Pretty weird to assign tariffs around whether the house faces north, its size and whether the person is on welfare or not. Th... View
chewy14 - 10 hours ago
Retro, One of us in denial, that's for sure but it isn't me. You still think fossil fuels can compete with cheaper renewable... View
Capital Retro - 12 hours ago
You are still in denial that renewables are where they are solely because of massive subsidies. At the rate coal fired power... View
Community 5

Norm Cheeseman - 9 hours ago
My great grandfather Noah Cheeseman was the first owner, the pub was built by his father in law Jeremiah Barrett View
Cheryl Thuillier - 10 hours ago
Was a great place. View
Motoring 9

Jose Vega - 11 hours ago
Because they think they can get more votes as per Trump and his extreme right wing mates in the USA. Just that no other reaso... View
Lifestyle 6

Not to be repeated, modern spacious living set alongside Canberra’s rich history

@the_riotact @The_RiotACT
In the last week alone, @genesisowusu took home 4 ARIA and two Triple J awards. We sit down with the #Canberra artist behind Owusu's most iconic piece of gold jewellery - his gold grill https://t.co/r576TmanM0 (10 hours ago)

@the_riotact @The_RiotACT
New details shed light on what police allege happened during a dramatic #prisonbreak in July when a car was rammed in broad daylight as jail staff were transporting a #detainee to hospital https://t.co/c8KUV2DWZN (12 hours ago)