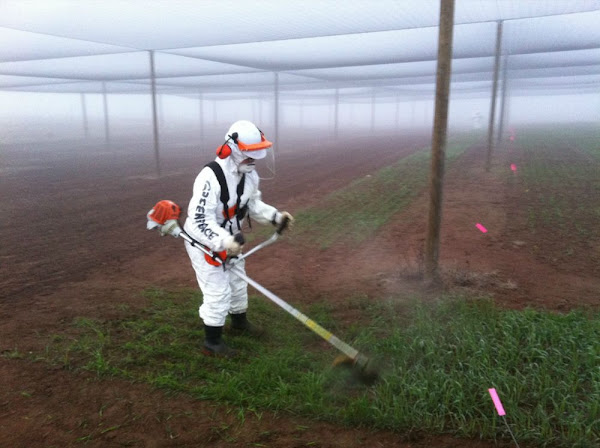 The two women, one aged 47 from the Sydney suburb of Willoughby and the other 34, from North Bondi, will be summonsed to appear in the ACT Magistrates Court charged with a number of offences, including trespass and damaging Commonwealth property.

The charges are the result of an ongoing investigation into the forced entry and trespass onto Commonwealth property in the ACT, and damage to that property on July 13.

During the execution of the search warrant at the Greenpeace headquarters in the Sydney suburb of Ultimo on Thursday, July 21, police seized a number of evidentiary items which are still being reviewed.

The investigation is continuing as police hope to identify further people who may have been involved, or assisted in the commission of the offences.

The women are expected to face the ACT Magistrates Court at a later date.

I say give them some time on the receiving end of a whipper-snipper, see how they like it

Perhaps this is the kind of emergency that Jamison’s whip phone is provided for?

I wish we had the “full force of the law” herabouts to bring down on them. As it is pleading “I’m a mum, I’m dumb” will probably see them off with a light wrist slapping.

Any chance of CSIRO recovering its wasted research costs for this one? That’ll teach these idiots a valuable lesson.

Recovering it from Greenpeace, since the act was committed under their banner.

I still have a quiet chuckle to myself at the absurdity of Ms McCabe’s statement: “I’m sick of being treated like a dumb Mum who doesn’t understand the science.”

Heather, let me spell it out for you. Your actions proved beyond doubt that you are a dumb mum and you don’t understand the science.

When you’ve put in several years of study in a discipline that relates to genetic engineering and have grasped the science, and still wish to chop down other people’s work to satisfy your own beliefs, you may be able to repeat your statement with at least a modicum of credibility. Until then your excuses for your apalling behaviour are as hollow as the space between your ears appears to be.

Any chance of CSIRO recovering its wasted research costs for this one? That’ll teach these idiots a valuable lesson.

I say give them some time on the receiving end of a whipper-snipper, see how they like it

These women will drive from Sydney to Canberra to cut down a plant at CSIRO, but I bet on the weekends they make their husbands mow the lawn and whipper-snip the edges, because its hard dirty work.

Good, give them a decent punishment not a slap on the wrist.

Di Hunter - 15 minutes ago
Jackie Hattingh it’s actually proven that they don’t and it is also proven that they are not in the great a numbers as th... View
Ross Jet Mccabe - 3 hours ago
Paul Monger That was probably the only good thing that they have introduced. View
Jackie Hattingh - 3 hours ago
On the other hand they trample and destroy habitat, causing erosion and water run off - drier = fires View
News 4

Ricky Gill - 49 minutes ago
Beth Stevenson is that U? View
Paul Leins - 1 hour ago
Rheyce Spears Neither party has any interest in solving the problem. Ideologically, the current state of the housing market i... View
Paul Leins - 1 hour ago
Sadly this is the story all around this region. Prices keep going up up up and the government has abdicated any responsibilit... View
Food & Wine 113

Jeffrey Brown - 5 hours ago
Ahhhh those were the days. Standing in the queue and watching the odd brawl of dudes trying to prove their worth. Was normal... View
Lifestyle 8

Brian Myerson - 9 hours ago
Your article does not mention that every person in Canberra should be extremely proud that almost every year they achieve one... View
Property 17

Shane Westmore - 9 hours ago
parking outside Woolies is all 2-hour paid, it's guaranteed this'll be the same... Coles will love turning that area into a m... View
show more show less
*Results are based on activity within last 7 days

Anyone who was finding their way as a young adult in Canberra in the mid-1990s knows that a night out...
News 27

New car sales have been slumping across Australia for the past couple of years. But even so, and despite predictions...
*Results are based on activity within last 7 days

@The_RiotACT @The_RiotACT
The Gungahlin Community Council hopes a new study results in community and recreational facilities that meet the needs of the fast-growing region https://t.co/uLNyehoql1 (40 minutes ago)